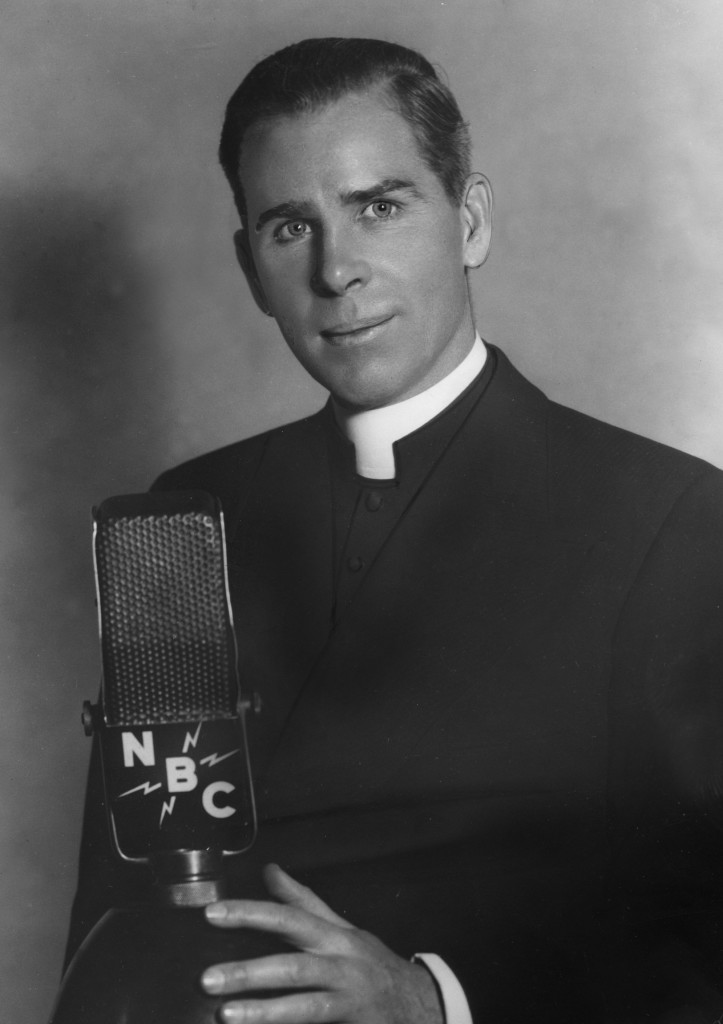 As most readers know by now, some rascally American bishops have conspired to halt Fulton Sheen’s beatification. News of the delay has been stirring up all sorts of indignation on the part of conservatives, even among those who seem to tilt toward tradition. On some level, I get it; compared to the humanists that comprise the ranks of the USCCB, Sheen comes off looking like a knight in shining armor.

I also understand, however, that God uses what the wicked intend for evil by turning it into good, that He might save many people (cf Genesis 50:20). This, to my mind, is very likely what is happening here.

Even if Fulton Sheen had no hand whatsoever in shielding or otherwise ignoring the activities of clerical sex abusers – reportedly, the reason for the delay – the celebrity cleric was a full blown man of the Council. In other words, the last thing Sheen deserves, despite whatever truths he may have preached over the years, is to be held up before the eyes of the innocent and unsuspecting as a model of heroic virtue worthy of emulation.

Now, don’t get me wrong, I fully realize that Modernist Rome’s version of the entire process amounts to nothing more than a Conciliar Lifetime Achievement Award for Service to the Revolution, but the reality is that many people who sincerely want to be Catholic do not realize as much. This is especially evident given the way in which certain tradition-minded Catholics are reacting to the postponement of Sheen’s award ceremony; they are are behaving as if Padre Pio was being slandered.

For those unaware of Sheen’s conciliar street cred (i.e., the Modernist views that will presumably earn him an eventual place among other fake saints of bitter memory, men like John Paul II, Paul VI, John XXIII, etc.), consider the following:

Christ is hidden in all world religions, though as yet His face is veiled as it was to Moses, who asked to see it. I have always contended in talking to missionaries that we are not so much to bring Christ to peoples as we are to bring Christ out of them. (Treasure in Clay: The Autobiography of Fulton J. Sheen, Page 156)

If the above quote was attributed to Jorge Bergoglio and shared with the very same people who are presently decrying the grave injustice allegedly being done to Fulton Sheen, nearly all of them would denounce it for the pure garbage that it is. And yet, they clamor for Sheen’s beatification.

… they would show to the non-believer, hidden away in the very depths of his being, the very germ which Christ Himself bore in His conscience, and which He bequeathed to the world. Such, Venerable Brethren, is a summary description of the apologetic method of the Modernists… (see Pope St. Pius X, Pascendi Dominici Gregis 37)

If that’s not enough to reveal Fulton Sheen for the misguided Modernist that he was, consider the following excerpts taken from a 1970 interview conducted by William F. Buckley on the program Firing Line.

Sheen stated: (For those who wish to see it for themselves, a timestamp precedes the citations.)

22:49 Governments have no eternal end. They have only a temporal end, and having such they have to use temporal means in order to attain it. We simply cannot apply ideal social goods and Christian principles that have eternal ends to the temporal ends of government…

27:19 The Church and Christianity has pretty much had a kind of a monopoly about God and particularly the supernatural. It aggrandized to itself this divine order and kept the natural order outside. So our distinction between the two was quite rigid and severe with the result that the natural order, the political, social order had to find its own deities, develop its own religions and naturalism, humanism and existentialism.

Clearly, either Fulton Sheen never truly accepted, or was pleased to forget, the traditional doctrine on Church-State relations, the Social Kingship of Christ, and the duty of States toward Him. More obvious still, he was clearly pleased to jettison any talk of the Catholic faith being the one true religion, a reality that he mocks as a “kind of monopoly.”

And just what, according to Sheen, served to remedy this terrible situation wherein the “rigid” Church dared to “aggrandize” itself?

You guessed it: The Almighty Council!

While some of what has been shared in this post may be new to a number of readers, none of it amounts to an especially well-kept secret.

In spite of this, Steve Skojec, who postures as a “traditionalist” working to “rebuild Catholic culture,” is one of those people rushing to defend Fulton J. Sheen, calling the Modernist prelate “arguably the greatest orator and educator of the Catholic faith in the modern Church.” (The video below will begin at the appropriate point for those who wish to hear his embarrassing… no, make that, his revealing comments firsthand.)

Is this a case of genuine ignorance concerning Sheen’s well-known love affair with the Council, or is it a calculated attempt to cash-in on the outrage being expressed by the neo-con members of Fulton’s Fan Club? Either way, one thing is certain; it is a grave disservice to Catholic tradition and those who wish to discover it.

As previously stated, I believe that God is using this dust-up over Sheen’s so-called beatification for good, that many might be saved from being deceived. One of the ways in which this is happening is that it has become an occasion for those who only claim to be dedicated to “restoring Catholic tradition” to unmask themselves.

In conclusion, I’m all for railing against the humanist hypocrites at the USCCB, but let’s give Fulton Sheen his due as well. In spite of any appearances to the contrary, he ultimately revealed himself to be, either by ignorance or by guile, an enemy of Catholic tradition, and the same can be said of those presently showering him with accolades.

Synod 2015: An exercise in modernism