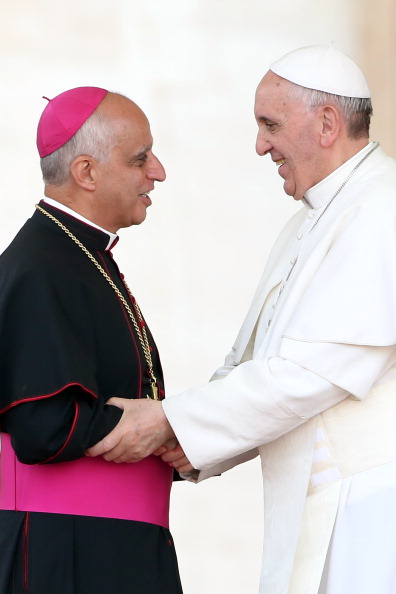 And so the effort to grease the skids in preparation for what promises to be the upcoming Synod’s assault on Catholic doctrine in the name of “pastoral solutions” has been ratcheted up a notch:

Specifically, Pope Francis’ recent announcement of an “extraordinary Jubilee” under the title the Holy Year of Mercy.

Called by a more faithful pope at a healthier time, one might well expect this Holy Year to serve as an avenue of grace, but let’s not be naive; any graces derived from this effort will come in spite of its masterminds’ intent.

This Holy Year announcement has all the markings of a well-planned strategy designed to fertilize Catholic minds with the manure of modernism, that the seeds of the Franciscan revolution might more readily flourish.

It appears, in other words, to be little more than an effort to weaken those of lesser resolve who might otherwise resist; with the revolutionaries’ operating principle no more pure than “the more we propagandize today, the less we scandalize tomorrow.”

During his sermon given in St. Peter’s Basilica yesterday wherein he announced the Holy Year, Pope Francis said:

The call of Jesus pushes each of us never to stop at the surface of things, especially when we are dealing with a person. We are called to look beyond, to focus on the heart to see how much generosity everyone is capable. No one can be excluded from the mercy of God; everyone knows the way to access it and the Church is the house that welcomes all and refuses no one. Its doors remain wide open, so that those who are touched by grace can find the certainty of forgiveness. The greater the sin, so much the greater must be the love that the Church expresses toward those who convert.

Translation: When we see someone who is validly married to one person and yet is cohabitating with another in a sexual relationship, we must look beyond the objective truth that comes to us from Christ in order to focus on the subjective emotions that reside in the hearts of sinful men. No one can be excluded from the mercy of God as made manifest in Holy Communion!

Pope Francis went on to provide the following details:

This Holy Year will begin on this coming Solemnity of the Immaculate Conception and will end on November 20, 2016, the Sunday dedicated to Our Lord Jesus Christ, King of the Universe – and living face of the Father’s mercy. I entrust the organization of this Jubilee to the Pontifical Council for Promotion of the New Evangelization, that [the dicastery] might animate it as a new stage in the journey of the Church on its mission to bring to every person the Gospel of mercy.

Once upon a time, the mission of the Church, day in and day out, was dedicated to the Kingship of Christ, but I digress…

Yes, but the Holy Year of Mercy doesn’t even begin until after the Synod!

Indeed, but it’s not just the actual year that matters; it’s also the assorted initiatives and activities that will take place in preparation for it just as the Synod draws near.

No doubt the various national episcopal conferences will soon announce plans relative to the Holy Year of Mercy; with the appointment of ad hoc committees, the assembly of councils of laity, and calls for the input of dioceses and parishes.

And all of it will be carried out under the direction of the Pontifical Council for Promotion of the New Evangelization under the headship of one Archbishop Rino Fisichella.

This is the same Rino Fisichella who made international news back in 2009 when, as President of the Pontifical Academy for Life, he stated that two Brazilian doctors who performed an abortion on a 9-year-old rape victim do not merit excommunication since they acted to save her life.

The statement, by Archbishop Rino Fisichella, president of the Pontifical Academy for Life, appeared as the lead article in last Sunday’s issue of the official Vatican newspaper, L’Osservatore Romano.

“There are others who deserve excommunication and our forgiveness,” Fisichella wrote, addressing the unidentified rape victim, “not those who permitted you to live and who will help you to regain hope and faith.”

In this one discovers Archbishop Fisichella’s primary qualification for directing the Holy Year of Mercy effort to propagandize the faithful in preparation for the Synodal revolution; he, Walter Kasper, and Pope Francis, et al., share similarly twisted ideas about mercy and forgiveness.

More recently, Fisichella went to bat for the cause in an interview with Vatican Insider shortly after the Extraordinary Synod opened in October:

“There are passages in the New Testament which I have not heard anyone quote yet but could orient us” toward new solutions. ”Legalism” must be overcome and the Church must embrace people “like a mother, not like a judge”

At this, I trust the point is made:

Far from being the spontaneous decision of a humble pope who allows himself to be moved by the breath of the Holy Ghost like a feather in the wind; the “surprise announcement” of a Holy Year of Mercy is the fruit of careful calculation born of an intransigent desire to circumvent immutable Catholic doctrine.

Do not, however, despair; rather, rejoice!

In all of this one might sense the very undoing of the revolution, which, like a tree that blossoms profusely just before its death, is making one last effort to cement its legacy.

One notes along these lines the comment Pope Francis recently made an interview with the Mexican media outlet Televisa:

I have the sensation that my pontificate will be brief: Four or five years.

It would appear that even Pope Francis knows that time is running short, not just for himself but for those of like mind. In any case, there can be no doubt that Satan, the true mastermind of the revolution, knows as much.

As disturbing as recent events in the Church truly are, it may be the case that the Synod is going to provide an alarm sufficiently piercing to clear the diabolical fog that clouds the judgment of so many otherwise faithful men; ushering in that long-awaited moment wherein each and every one must choose this day who he will serve.

At the conclusion to his sermon yesterday Pope Francis said:

From this moment, we entrust this Holy Year to the Mother of Mercy, that she might turn her gaze upon us and watch over our journey.

Imagine, in the space of just this one sermon, not only has Pope Francis invoked the very King whose decrees he would undermine, he even went so far as to entrust the revolution to the care of the Queen Mother!

How much longer can this possibly go on?

And we know that to them that love God all things work together unto good: to such as, according to his purpose, are called to be saints. (Romans 8:28)

We may well be living in the lead-up to a conclave that will respond to these terrible offenses against Our Lord by electing the antithesis of Pope Francis; a pope who will repeat after the Psalmist, “Oh, how I love thy law!”

This next pope may even be the very Holy Father who will at long last carry out Our Lady of Fatima’s simple request; that the desire of her Son might be realized as devotion to the Immaculate Heart is placed beside devotion to His Sacred Heart.

With this in mind I say: