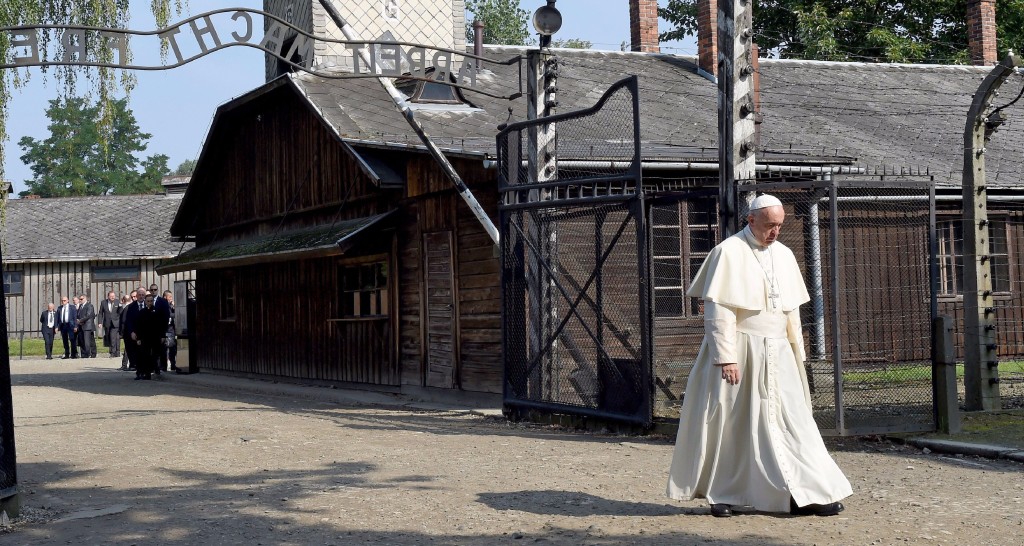 According to Vatican Radio, Pope Francis met with a delegation from the European Jewish Congress (EJC) on January 27th, otherwise known to some as International Holocaust Remembrance Day.

Present at the meeting was Secretary of the Pontifical Commission for Religious Relations with the Jews, Fr. Norbert Hofmann, who said:

[Francis] began the dialogue by mentioning the importance of this Day for the Jews, but also for us, because remembering the victims of the Holocaust is important so that this human tragedy never happens again.

Also present at the meeting was the President of the EJC, Moshe Kantor.

According to Fr. Hofmann:

I for one am sick to death of hearing these make-believe “Jews” wailing incessantly about the horrors of the Holocaust while simultaneously insisting upon a so-called right to exterminate the most innocent of human beings in utero simply because they are inconvenient or may perhaps serve as a testament to the lack of “moral and ethical values” on the part their promiscuous would-be parents.

The European Jewish Congress is representative of those who choose to self-identify as “Jewish” and yet don’t have the decency to plainly admit that they firmly reject the moral tenets of Judaism properly so called.

For the EJC and certain other so-called “Jewish” organizations, “Holocaust Remembrance” has nothing whatsoever to do with upholding human dignity; much less does it have anything to do with honoring the God of Abraham, Isaac and Jacob.

Rather, Holocaust, Inc.®, as the aforementioned collection of organizations should more properly be called, with their ubiquitous slogan “Never Again” ®, is nothing more than the marketing arm of a progressive humanist movement seeking to increase its financial and political influence in furtherance of its anti-Catholic, globalist, agenda; an agenda that includes such abominations as abortion, LGBT activism, and earth worship.

“Holocaust” insofar as these people are concerned isn’t a reference to genocide, it’s a brand – a highly marketable commodity, the exclusive rights to which they will stop at nothing to defend.

As such, it is no surprise that the EJC was pleased to report to its supporters:

A far-right wing populist group from Poland was forced to take down a controversial poster-exhibition at the European Parliament in Strasbourg that compared abortion to the Holocaust.

The “far-right wing” group’s crime was to call attention to one of the Ten Commandments given by God to Moshe Kantor’s namesake, “Thou shalt not kill,” by daring to “juxtapose photos of children in Nazi concentration camps, linking abortion and Nazi crimes.”

The heart of the problem in this case – in addition to the fact that the ersatz “Jews” at EJC could give a falafel about Divine Revelation – is that concentration camp photos are proprietary, belonging not to the public domain, but rather to Holocaust, Inc.

Oh, they can be used without the express permission of Holocaust, Inc., but only if done in a manner that is consonant with their godless aims, likewise, comparisons drawn between Hitler ® (another wholly owned commodity of Holocaust, Inc.)  and modern day political figures. 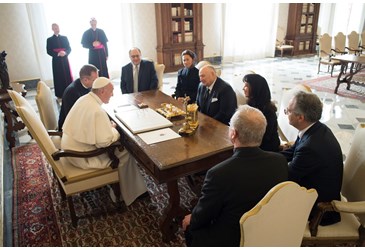 Francis holding court with the EJC on “Holocaust Remembrance Day”

Which brings me back to His Humbleness, Francis – the media manipulator extraordinaire who recently saw fit to play the Hitler card in a way that has been received by many (and never denied by the Holy See) as a reference to Donald Trump, the latter committing such unforgivable “populist” crimes as signing an executive order banning government funding of foreign pro-abortion groups.

How fitting it is that members of the European Jewish Congress should enjoy a pleasant little visit with Francis, the same who doesn’t have the decency to answer five simple questions thereby plainly admitting that he too firmly rejects the moral tenets of the religion that he claims to represent.

May it please God to grant us a pope who is less concerned with winning favor with the enemies of Jesus Christ than with treating every day as Pentecost Remembrance Day by calling the Jews, and others exposed to final despair, to conversion.