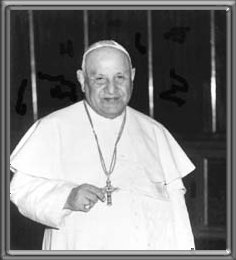 In his well-written, extensively footnoted, and most excellent book, “The Second Vatican Council: An Unwritten Story,” Professor Roberto de Mattei shared some information that casts serious doubt on Pope John XIII’s contention that the idea of an ecumenical council came to him suddenly and directly from the Holy Spirit.

“We uttered those words [‘Ecumenical Council’] in the presence of the Sacred College of Cardinals on that memorable January 25, 1959, the feast of the Conversion of St. Paul, in the basilica dedicated to him. It was completely unexpected, like a flash of heavenly light, shedding sweetness in eyes and hearts.”

Later that year, in a private journal entry dated September 16, and presented in the above referenced book (pg. 92), Pope John writes “I was the first to be surprised at my proposal.”

And yet, also referenced by Professor de Mattei (pg. 87) is a conversation that allegedly took place between Dom Lambert Beauduin, a close friend of Cardinal Angelo Roncalli, and his disciple, Roger Poelman, as the pontificate of Pope Pius XII had yet to come to a close.

As recalled by Poelman, Beauduin assured him, “He [Pius XII] will die very soon. His successor will be Roncalli … You will see. He will hold a council and will do so in an ecumenical perspective.”

Setting aside Dom Beauduin’s accuracy in predicting that Angelo Roncalli would be elected Pius’ successor, how could he be so certain that a council would be convened if indeed his close friend was chosen? Surely they had spoken about this previously, no?

Professor de Mattei offers yet another interesting reference (pg. 96) in an excerpt from the Italian Weekly, Epoca, wherein Cardinal Alfredo Ottaviani was interviewed about the recently announced council.

He [Roncalli] had spoken about it to me from the moment of his election. Or, rather, to be more precise, it was I who visited him in his little room at the conclave on the eve of the election. Among other things, I told him, “Your Eminence, it is necessary to think about a council.” Cardinal Ruffini, who was present at the conversation, was of the same mind. Cardinal Roncalli adopted this idea and later had this to say, “I have thought of a council from the moment when I became pope.”

So, from where did this story about the Holy Spirit inspiring the Council “like a flash of Heavenly light” come?

Professor de Mattei shares yet another excerpt from the journal of Pope John XXIII (pg. 92) wherein the Holy Father writes of an event (recorded on two different dates; January 15 and 20,1959, prior to making the big announcement):

In an audience with Secretary of State Tardini, for the first time, and, I would say, as though by chance, I happened to mention the word “council,” as if to say what the new pope could propose as an invitation to an enormous movement of spirituality for Holy Church and for the world … “Oh! Oh? That’s an idea, right?” [Tardini replied.] (Jan. 20, 1959)

In the January 15th entry, John XXIII recorded Cardinal Tardini’s response as, “Oh! This is a luminous and holy idea. It comes right from heaven…” [Emphasis added.]

Apparently, Pope John XXIII liked the sound of that, but did it really?

Be you therefore perfect…