Today at Mass, the priest offered an impromptu prayer for Pope Francis and the pilgrims at World Youth Day, which, according to Father, is an event most blessed and dear to Our Lord as evidenced by the abundant fruit it has borne in the lives of those who have attended it over the years, which includes, by the way, no small number of priestly and religious vocations.

Which reminds me of a story…

It was about 8:25 on a Friday night; not unlike the dozens of others that had preceded it throughout that entire year.

John downed his third shot of whiskey with an audible gulp, slapped a twenty dollar bill on the bar, and like a man who was late for a date with destiny quickly jumped from the bar stool as he muttered with a grunt, “Keep the change.”

Making his way out of a side door, John strode across the parking lot with a deliberate swagger that belied the bitter anguish of uncertainty that burned deep within his soul. Though the whiskey had helped to dull the pain to some degree, it took effort for John to deny what his gut had long since acknowledged; namely, that there has to be something more to look forward to in life than the payday ritual that typically set him back nearly half the rent before sunrise.

With his face shining red in the glow of the neon MOTEL sign that flickered from the roof just above room 118, John took in a deep breath and exhaled loudly as if to make one last desperate attempt, before knocking on the door, to cast his troubled thoughts out into the dampness of the thick summertime air .

“Well hey there, love,” Della said as a chilled breeze rushed through the doorway to greet his sweaty face.

Stepping inside, John knew damn well it wasn’t really love, but just the sound of Della’s voice was about as close as he’d been in a very long time. Besides, he thought to himself, in some sense we really are like soul mates, each in our own way trying to fill the same unspeakable void.

Startled and disoriented, he rubbed his blurry eyes and struggled to focus on the dime store alarm clock sitting on the well-worn nightstand.

“Ten forty-five. Damn! I must’ve dozed off,” John blurted out, more than a little embarrassed.

“No worries,” Della said, “I’m, uh… making a little house call tonight and won’t be back until morning. Stay as long as you like, just pull the door tight and it’ll lock behind you.”

Lying there looking up at the water stained stucco ceiling, John contemplated a return trip to the bar, debating with himself and negotiating all the angles; not for any lack of desire, mind you, but for lack of adequate funds.

Hey, I wonder if she took the cash? Not that I would actually steal it, you know, it’s just that… I mean, if I had to borrow twenty bucks until next week, I’m sure she’ll understand.

As was their typical routine, John had placed $100 next to the lamp, and as he sat down to unlace his shoes, Della opened the nightstand drawer and swiftly brushed the money inside without ever saying a word. It was their way of pretending, in spite of the obvious, that they were engaged in something more meaningful than just “doing business.”

After wrestling with his conscience for what felt like an eternity, John sat up, swung his legs off the side of the bed and slowly opened the drawer.

Peering inside, John sat dumbfounded and dazed, his head spinning with confusion.

Damn it! I was hoping the money would be there! I mean… I was, wasn’t I? Then why am I so relieved to see that it’s gone?

And then, almost without forethought or effort John heard himself saying aloud, “Lead us not into temptation…”

At that moment, John took notice of the only thing sitting inside of that nightstand drawer, a brown hardback book with gold letters that read, “Holy Bible.”

John awoke to the delightful sound of chirping birds.  Strange, he thought to himself, how can the birds be so much louder than that rattly old air conditioner? Am I dreaming?

Staring up at that same water stained stucco ceiling once more, John had an entirely new feeling; an indescribable sense of peace. He felt almost as if he was floating in the sky looking up into the clouds.

Is this really happening, he wondered?

The events of the previous night slowly came back to him:

Opening the nightstand drawer; coming face-to-face with an almost foreign desire to do something good; taking the Bible in his trembling hands; clutching it to his chest as he prayed, for the first time in decades, the Lord’s Prayer, surprised he even remembered the words; reading all four gospels well into the early morning hours; the copious tears that flowed down his cheeks, ushering in the most serene sleep he had ever experienced…

John remembered every detail with perfect clarity. He knew exactly what he had to do next.

“I absolve you from your sins in the name of the Father, and of the Son, and of the Holy Spirit.”

These words, spoken by the priest in persona Christi, echoed in John’s mind as he walked out of the church, practically on air, having made a good confession for the first time since he was in high school.

That was nineteen years ago last August, and John hasn’t missed even one Mass on a holy day of obligation since. In fact, in all but the most extreme of circumstances, he’s a daily communicant. He and his wife, whom he met in a Scripture study program at John’s parish, will celebrate their fifteenth wedding anniversary this year, and their only child, a daughter named Della, is discerning a religious vocation.

The moral of the story is clear: As the fruits borne in John’s life adequately attest, God is glorified when men frequent prostitutes in motel rooms that have a Bible in the nightstand.

UPDATE: Since posting this, it has come to my attention that the point being made in this parody is not as obvious as I initially thought. Here’s the deal:

Often, we tend to confuse God’s generosity in pouring out His grace on people who are engaged in less than ideal circumstances or behaviors with God’s approval of the circumstances or behaviors themselves. In the case of the rootin’ tootin’, foot stomping, rock-n-roll, quasi protestant liturgies that have become a hallmark of World Youth Day, it would be a ridiculous leap of logic to conclude that the Lord is delighted with such events simply because He is generous enough to move the hearts of those in attendance, just as it would be foolish to believe that He delights in seedy motel rendezvous based on the story told above. IN both cases, the good “fruits” are evidence of God’s goodness, nothing more. 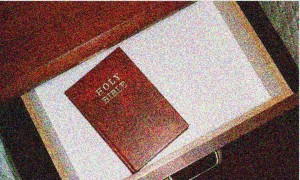