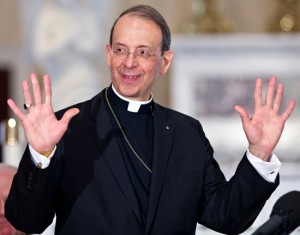 On February 15, 2013, Archbishop Lori sent a letter to Congress urging legislators to “restore a tradition on rights of conscience in health care.”

To bolster his plea, the archbishop pointed to the fact that “President Clinton signed into law an appropriations provision instructing the District of Columbia to exempt those with moral or religious objections if it wished to approve a contraceptive mandate for its citizens.”

He also referenced the fact that “Senator Moynihan’s bipartisan health care reform bill of 1994 included an opt-out from coverage of ‘abortion or other services’ for those with a moral or religious objection” [emphasis in original].

Archbishop Lori further cited precedence in “the Church amendment of 1973 which was designed to shield both individual and institutional health care providers from forced involvement in abortion or sterilization, and was amended the following year to protect conscientious objection to other health services generally.”

So, here we are right back where we began this embarrassing episode in the history of the Catholic Church in the United States.

My initial observations, offered in a column dated over one year ago, still apply.

Just a brief look at the way in which the bishops framed their argument against the HHS mandate from day one makes it is clear that the crisis of which I speak is a major factor in bringing our shepherds to this point where they now finding themselves embroiled in a messy political battle rather than devoting the fullness of their energies more directly toward winning the battle for souls; i.e., teaching, sanctifying and governing the people of God.

Archbishop Lori’s letter, in citing as a model to be emulated previously instituted provisions allowing for “an opt-out from coverage of abortion or other services,” is nothing short of an embarrassment; at least for those rare Catholics who have an awareness of the long-since ignored Social Kingship of Christ.

Archbishop Lori, to be fair, isn’t blazing any trails here; rather, he is simply following in the footsteps of those who came before him. For more than forty years, the overwhelming majority of our prelates have been behaving as though the Lord commissioned His Church to simply hunker down in a ghetto, even as the world He died to redeem thumbs its collective nose at the Divine Law they refuse to proclaim, all in the name of an ersatz right to “religious liberty.”

CONFIRMED: The “Ecumenical Mass” has arrived

Francis to head up United Nations of Religion?