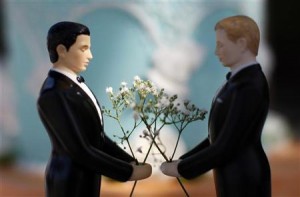 My friend Damian Goddard, a bona fide champion defender of authentic marriage, called my attention to a recent entry on the Huffington Post blog by one of their “Gay Voices,” Zach Stafford.

The piece is entitled, “‘Monogamish’: Two Is Company, but Is Three Really a Crowd?”

NOTE: Don’t bother grabbing your Merriam-Websters off the shelf. As you’ll discover if you read the post, “monogamish” is just another one of those made-up words invented by gay activists who are cunning enough to realize that manipulating vocabulary is a useful tool for corrupting the culture; e.g., “homophobe, same-sex marriage, gender nonconforming,” etc. (They obviously learned well from their “pro-choice” allies.)

In any event, as you may have guessed, Zach is raising his gay voice in this post to suggest that monogamy may very well be incompatible with human fulfillment, not just for gays, but for everyone.

That, after all, has been the punchline all along. The homosexualist movement has never been about fairness and acceptance; rather, it has always been an effort to redefine human nature, family and society – one of Satan’s top priorities in his war against God.

Think about how the gay argument has progressed over the years.

Who can possibly count the number of times, just a few short years ago, we were lectured about all of those “loving and committed homosexual couples” who are unfairly being denied the right to enshrine their commitment in marriage just like their heterosexual counterparts?

The often repeated lie, of course, was that exchanging the little bride statue on top of the wedding cake for another dude (or vice versa) in no way implies a conflict with the traditional understanding of what “love” and “commitment” actually mean.

At one point the propagandists even asked us to believe (and surely many did) that homosexual couples are actually superior to heterosexuals in living out the marital commitment!

“For insights into healthy marriages… a growing body of evidence shows that same-sex couples have a great deal to teach everyone else about marriage,” reported the N.Y. Times in 2008. “Most studies show surprisingly few differences between committed gay couples and committed straight couples,” the article alleged.

In 2010, however, apparently confident that the mission was sufficiently accomplished to allow for a bit of candor, the Times sang a different tune.

“A study to be released next month is offering a rare glimpse inside gay relationships and reveals that monogamy is not a central feature for many. New research at San Francisco State University reveals just how common open relationships are among gay men and lesbians in the Bay Area.

The Gay Couples Study has followed 556 male couples for three years — about 50 percent of those surveyed have sex outside their relationships, with the knowledge and approval of their partners.”

Fast forward to today and the mask is pretty much off as evidenced by Huffpo’s “Gay Voices” openly pushing to redefine the boundaries of marital commitment for everyone.

There is at least one interesting comment to be found in this otherwise disturbing piece:

“Other great arguments against monogamy have been put forward. For example, men may be incapable of fidelity because we have a biological imperative to reproduce with as many partners as possible to ensure the survival of our genes.”

Gay activists are Hell bent on doing battle against human nature and sex as God intends it, and yet have no difficulty recognizing that the sexual act is inextricably and naturally ordered toward its proper end; procreation. I guess it never dawned on the writer that this is something that no amount of homosex can ever accomplish.  No matter! Apparently nothing is too much of a stretch when it comes to making an argument for “hooking up” with abandon.

Of course, in the process of making that stretch the writer reveals for all the world to see that he considers human beings to be no different than the animals whose mating habits are motivated, not by love, but by some “biological” urge.

And this is perhaps the most telling detail of all.