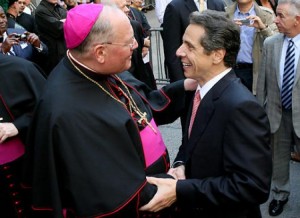 In the interview with Catholic News Service featured in the video at the bottom of this post, Cardinal Dolan articulates some of the primary challenges the next pope will face.

Well, yes, I see what you’re saying, Eminence, but to be very honest, I’m not all that thrilled with the way you’re saying it.

It’s rather commonplace for churchmen in our day to preface absolute, objective religious truth (like Jesus and His Church are one) with the qualifier, “We as Catholics believe.” It’s a nasty habit indeed; one that undermines the Church’s mission by muffling the call to conversion. In other words, it subtly suggests that our beliefs are no more valid than those held by anyone else.

Now this is just plain troubling.

A far more accurate statement would be, “We have a major theistic problem, because many people who say ‘I believe in God’ actually believe in a deity of their own making. We also have a very serious Christological problem, because many people, Catholics included, like the governor of my state, New York, tell us they have no problem accepting Jesus as their Lord and Savior and yet they promote objective evils like abortion and homosexuality.”

So what, according to Cardinal Dolan, is the problem?

“We do have an ecclesialogical one,” he said, by which I believe he means to say that we have to do a better job of articulating exactly what the Church is.

On this note, I couldn’t agree more, but based on what I’ve shared thus far (to say nothing of Cardinal Dolan’s history), there’s little evidence that he’s prepared to tell the world that the Church is the one true Faith established by Jesus Christ and the unique sacrament of salvation for every human being, the same to whom the Lord has entrusted objective religious truth in all of its fullness.

Cardinal Dolan went on to state, “We have a vocation shortage to the sacrament of marriage.”

Again, agreed. Of course, this particular problem isn’t one the next pope can address by himself; rather, he must count on ordinaries, like Cardinal Dolan, to teach and protect the sanctity of marriage by firmly rebuking politicians and others who promote so called “same-sex marriage,” especially those who call themselves Catholic. His track record on this note is not exactly stellar.

Cardinal Dolan then moves on to an issue that encompasses all the others; namely, “Religious freedom and the protection of persecuted minorities throughout the world, Catholic and non.”

“Among my brother bishops there’s a strong feeling that the Church should be, and is, and needs to be even more robust in its defense of religious freedom, not only where Christians are subjected to outright persecution and harassment. That’s a biggie,” he said.

“They [even non-Christians] should be able to look to the Holy See and to the Church Universal as a patron, as an advocate, as a friend, and as an ally, a sanctuary,” he asserted.

This rather lofty, politically correct, notion may win a lot of friends among the heathens of the world, and even among many of the poorly catechized within the Church, but at the end of the day, it isn’t a particularly Catholic one.

Consider very carefully what Cardinal Dolan is saying: He is suggesting that the Church should stand up to defend the public practice of religions that reject Jesus Christ, and by extension, the One who sent Him. The idea is just preposterous.

Finally, Cardinal Dolan turns his attention to “a more insidious kind of harassment,” one he described as a scenario in which “religion and faith in the Church are being reduced to a personal hobby, and made exclusively private, and the ability to give public witness to the Faith is curtailed.”

How can he, and so many other churchmen like him, fail to see that they have exacerbated, if not instigated, every single challenge he articulated by prefacing objective truth with qualifiers that make it seem like just one valid manner of believing among many, for failing to express outrage when the Lord’s good name is slandered by pseudo-Christians, for handling politicians who do precisely this with kid gloves, and by speaking as if rejecting the Lord Jesus Christ is a Divine right?