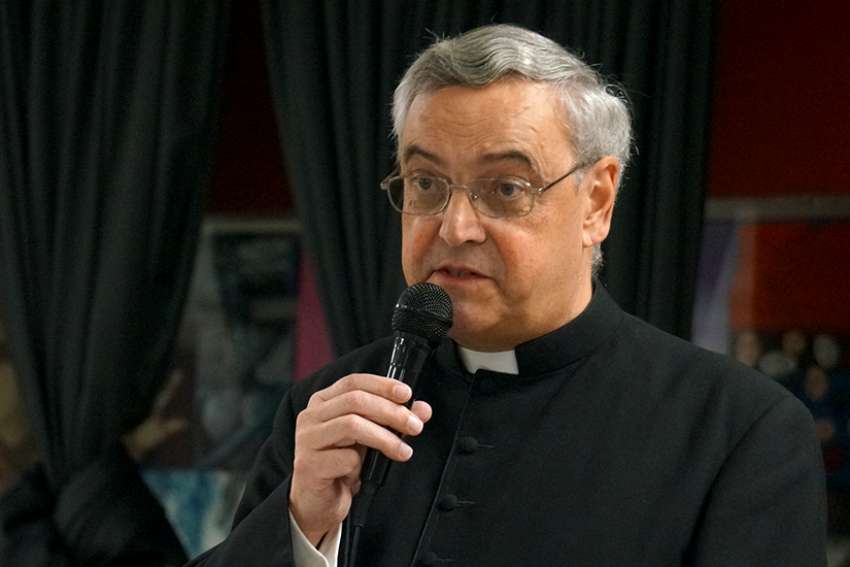 On November 30, The Catholic Register – Canada’s oldest (allegedly) Catholic newspaper – published an article on the Priestly Fraternity of St. Peter (FSSP), hailing the group for its “unity with Pope Francis.”

Interviewed for the article was Fr. Joseph Bisig, “a co-founder of the FSSP who gave a lecture in Ottawa Nov. 24.”

According to background provided by writer Deborah Gayapong:

The FSSP had its origins in the Society of St. Pius X (SSPX) … In the mid-1970s, the SSPX had its seminary in Econe, Switzerland, suppressed by the Archbishop of Fribourg. In 1976, Pope Paul VI suspended Lefebvre a divinis, meaning the archbishop was forbidden to celebrate any sacraments, including the Eucharist. But Lefebvre defied Rome and expanded his order to other nations.

Gayapong, whose online bio reads, “She currently covers religion and politics primarily for Catholic and Evangelical newspapers,” is apparently better qualified to write on topics concerning the latter.

In any event, Gayapong went on to report:

Bisig said the unjust suppression of the flourishing seminary, which had 120 seminarians by 1977, and Pope Paul VI’s subsequent suspension led to a change in Lefebvre’s attitude towards Rome, and his language became increasingly “polemical.”

“Until then it was forbidden for us to be critical of the Holy Father or Rome,” Bisig said.

Other than characterizing the suppression (that never actually happened) as “unjust,” Fr. Bisig seemed rather pleased to take the opportunity to malign both Archbishop Lefebvre and the Society of St. Pius X. First, one notes his deliberate choice of the word “polemical;” connoting as it does an attack, or criticism that is unjust or undue.

Perhaps Fr. Bisig needs to be reminded that St. Paul “opposed St. Peter to his face” (cf Galatians 2:11), or maybe he simply does not know what St. Thomas Aquinas taught:

It must be observed that if the faith were endangered, a subject ought to rebuke his prelate even publicly. (ST II-II.33.4)

In any case, as Fr. Bisig continued to speak, it became increasingly obvious that the real problem is likely due to a nasty infection; one that is especially prevalent among those who place a higher priority on so-called “full communion” with the conciliar church than union with Christ and the Holy Roman Catholic Church.

The founding members of the FSSP only split with Lefebvre after Lefebvre ordained four bishops in 1988 against the will of Pope St. John Paul II, leading to Lefebvre’s excommunication. The SSPX, then numbering some 60,000 followers, was deemed schismatic.

“It was clear we had to leave the Society because of this rupture with Rome,” said Bisig, one of 12 priests, one deacon and 20 seminarians who left. “We did not want to leave the SSPX,” he said. “We were forced to do so. Our superior became schismatic. We felt like orphans abandoned by our father.”

You want clear? It is patently obvious that Fr. Bisig and the other 31 men that jumped ship never truly understood why they were with the Society in the first place.

Our superior became schismatic. Though he doesn’t say so directly, Fr. Bisig is joining his voice to that of neo-con paper tiger Cardinal Leo the Cowardly Lion Burke in labeling the Society of St. Pius X “schismatic.” Whether he speaks only for himself or for the FSSP as a whole on this point, I cannot say.

As for a “rupture with Rome,” there was a rupture alright. As Archbishop Lefebvre said of the Second Vatican Council, “It was a true rupture in the Church.”

Every so-called “traditional Catholic” (if you’ll pardon the redundancy) worthy of the name agrees. Not Fr. Bisig, however.

If there was any question in the reader’s mind about whether or not Fr. Bisig is infected with modernism, he went on to leave little room for doubt:

“I pray very much for my old, good friends (in the SSPX) to join the Church” and to “come in without any conditions,” but to “accept the authority of the living magisterium,” Bisig said.

Oh yes, the living magisterium. Make no mistake, in this Fr. Bisig is not referring to the voice of Holy Mother Church speaking throughout the ages; rather, he is referring to the men-of-the-Council who are presently running the show in modern day Rome – the same who constantly insist upon dialogue, ecumenism, and religious liberty, but cannot manage to utter a peep about the Sovereign Rights of Christ the King. This is the “Church” [sic] of which Fr. Bisig is speaking.

In other words, he is praying that those in the SSPX will one day abandon authentic Catholic tradition and join him in embracing the conciliar church-of-man, its false doctrines, and its fake saints.

Fr. Bisig was the first Superior General of the FSSP; today, he is the rector of Our Lady of Guadalupe Seminary in Denton, Nebraska. I suppose this explains why newly ordained FSSP priests who were formed under his direction are crediting their vocation to “a saint, John Paul II.”

As I’ve written in the past, there are no truly militant religious orders or groups left in the Church; whether they be of the “full communion” variety or otherwise. None can be trusted entirely. Rather, we must measure every last word, nuance, and suggestion that comes to us against authentic Catholic tradition, regardless of source.

This is why I have never fancied myself a member of Team SSPX, or Team FSSP, or any such thing. My only desire is to never be misled in matters of faith, nor (God forbid!) to so mislead anyone else, and to live and die a member of the Holy Roman Catholic Church.

A Catholic Answer for Karl Keating