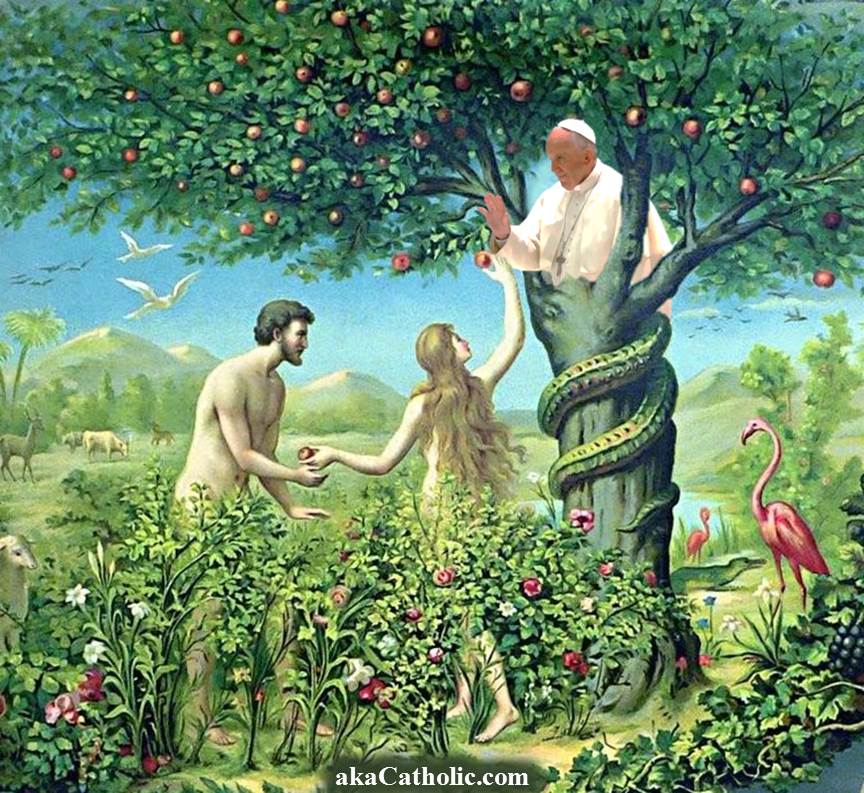 Francis the Falsifier is at it again; berating the faithful, mocking the Saints, and twisting Sacred Scripture.

During his Santa Marta sermon earlier this morning, the perfidious bishop-in-white set his sights once again on the so-called “rigid;” a Jesuitical slur reserved for those who actually believe what Holy Mother Church teaches in the name of Christ for our salvation.

Of such persons, His Humbleness declared:

“They are rigid people living a double life: They make themselves look good, sincere, but when no one sees them, they do ugly things.”

They make themselves look good…

This is rich coming from a man who never met a photographer before whom he was unwilling to strike a pious pose; including going down on the same knees that will not bend before Christ.

Looking sincere, but when no one sees them, they do ugly things…

Ah, yes… This calls to mind the behavior of a certain Argentinian who said to the bishops present in Rome for the start of the Extraordinary Synod in 2014:

“It is necessary to say with parrhesia [candor, freedom, openness, etc.] all that one feels. After the last Consistory (February 2014), in which the family was discussed, a Cardinal wrote to me, saying: what a shame that several Cardinals did not have the courage to say certain things out of respect for the Pope, perhaps believing that the Pope might think something else. This is not good, this is not synodality, because it is necessary to say all that, in the Lord, one feels the need to say: without polite deference, without hesitation.”

This coming from the “Pope” who removed priests from the Congregation for the Doctrine of the Faith simply because they were rumored to hold, in the Lord, an opinion at odds with his own; i.e., they were obviously “rigid.”

The address to the Extraordinary Synod ended with this gem:

I’d say that “safeguard of the faith” thing didn’t work out so well.

Be that as it may, present he was, indeed, striking a sincere papal pose for all to see while doing some very ugly things behind the scenes, like instructing Archbishop Bruno Forte, the Special Secretary of the Synod:

“If we speak explicitly about communion for the divorced and remarried, you do not know what a terrible mess we will make. So, we don’t speak of it plainly; do it in a way that the premises are there, then I will draw out the conclusions.”

How sincere can one bitter old man be?

Make no mistake about it, today’s rant at Santa Marta had nothing to do with the Mass readings; it was all about defending the blasphemous and heretical text of Amoris Laetitia.

Of those who would dare to allow the words of Christ, the immemorial practice of the Church, and the infallible doctrines of the faith to get in the way of his evil designs, Francis blared:

Paying lip service to today’s reading from Acts 9, Francis pointed out that Saul was once rigid because he was intolerant of what he saw as a heresy, but then he encountered “another Man, who spoke with a language of meekness: ‘Saul, Saul, why do you persecute me?’”

“This rigid young man, who had become a rigid man – but sincere! – was made a little child, and allowed himself to be led where the Lord called him.”

At this, Francis would have us imagine that Saul’s conversion made him tolerant of heresy, or at the very least, totally unconcerned about such things.

Given that he has no qualms about accusing Jesus Christ of being a Pharisee who lays impossible burdens upon men (cf AL 295, 301, 303), this comes as little surprise, nor is it the least bit out of character for Francis to slander St. Paul by twisting his Epistle to the Romans to suit his nefarious ends:

In other words, Forget about the Law concerning what you can and cannot do with your members; just follow the God of Surprises (me!) like a little child that does not know any better and you will be perfect!

Francis is here showing his Biblical prowess; going “off-script” by referring to Romans 6, which begins:

What shall we say, then? Shall we continue in sin, that grace may abound? God forbid! For we that are dead to sin, how shall we live any longer therein? (Romans 6:1-2)

St. Paul is posing questions to which every authentic Catholic knows the answers. (Sound familiar?)

Seriously, if they’ve not chosen one already, the Dubia Brothers would do well to make St. Paul the Patron Saint of their cause!

(By the way, where exactly are they? Are the cardinals perhaps waiting for May 13 to issue their “formal act of correction”?)

In any event, it almost sounds as if St. Paul is responding directly to Amoris Laetitia and the falsehoods that have been put forth with impunity by its rather Protestant author:

– “Hence it is can no longer simply be said that all those in any ‘irregular’ situation [adultery, fornication] are living in a state of mortal sin and are deprived of sanctifying grace.”  (AL 301)

– “By thinking that everything is black and white, we sometimes close off the way of grace and of growth, and discourage paths of sanctification which give glory to God.” (AL 305)

– “I’ve seen a lot of fidelity in these cohabitations, and I am sure that this is a real marriage, they have the grace of a real marriage because of their fidelity.”

To which St. Paul issues a dubia comprised of Divinely inspired words:

What shall we say, then? Shall we continue in sin, that grace may abound? God forbid! For we that are dead to sin, how shall we live any longer therein? (Romans 6:1-2)

Here’s a bit more of what St. Paul had to say in this chapter:

Let not sin therefore reign in your mortal body, so as to obey the lusts thereof. (Romans 6:12)

In other words, let he who tells you that you are “in a concrete situation which does not allow you to act differently than to remain in sin, obeying the lust of your bodies” (AL 301) be anathema; for he is a liar!

But thanks be to God, that you were the servants of sin but have obeyed from the heart unto that form of doctrine into which you have been delivered. (Romans 6:17)

In other words, do not be deceived by those who would suggest that the Church’s moral doctrine is “dry and lifeless,” (cf AL 59) or who would paint the Commandments against adultery and fornication as “rules imposed by sheer authority,” (cf AL 35) for it is in obeying such doctrines that one is delivered from the clutches of evil.

In other words, be on the lookout for he who does not hesitate to suggest that “one may, with full knowledge of the Divine Law, remain in adultery yet abide in the life of sanctifying grace” (cf AL 301) and yet refuses to warn against those sins that are mortal, for such a one is speaking not for God but His adversary.

More could be said here, but presumably the point has been made:

St. Paul’s epistles give no quarter to the likes of Jorge Mario Bergoglio, and any attempt on his part to suggest otherwise is nothing more than a diabolical act of deception.

Francis ended his intervention on behalf of Amoris Laetitia with a passive-aggressive “prayer” for the “rigid” wherein he subtly congratulated himself for being a model of meekness:

“Let us pray for those who are rigid, that they may follow the way of meekness of Jesus.”

O God, I give thee thanks that I am not as the rest of men, rigid, unmerciful, and doctrinaire…

May he that exalteth himself be humbled, and soon.

Please help us to continue defending the Catholic name as you are able.

Thank you in advance!

Novus Ordo: The mask is on… I mean, off