Home
Blog Post
From Benedict the Abdicator to Francis the Calumnizer 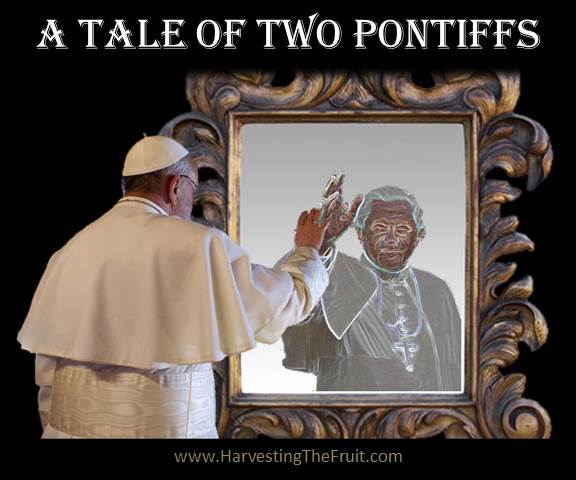 In spite of the considerable weight that Pope Francis near-daily adds to the Cross that is born by faithful Catholics, we can at least be thankful for his plainspokenness in revealing the nefarious agenda of the ecclesial subversives who seek to remake the Church in their own image and likeness from within.

As I have stated in the past, no longer, apparently, do the revolutionaries feel compelled to move about in the shadows; rather, all indications are that they, and the Bishop of Rome who leads them, believe that the scales have been sufficiently tipped in their favor among the people-in-the-pews (that which they falsely portray as the sensus fidelium) that the time is nigh to complete the operation, begun in earnest in 1958, in the plain light of day.

As such, Pope Francis comfortably and without hesitation serves as both the “defendant” accused by a faithful remnant of mutiny against Christ the King, and “star witness for the prosecution” thanks to his habit of spilling the neo-modernist beans without ever being called to the stand.

In the present case, I wish to thank the Holy Father for putting so clearly on display the logical consequences that arise from treating the doctrine of the Faith, as the modernists do, as if it were a lump of clay to be molded according to the whims of progressive generations; that slippery slope that leads from secret movements inspired by quiet claims of good intentions to a day when the sculptors themselves will broadcast for all to hear, without any hint of shame, their sins against God and man.

This brings me to a homily delivered by Pope Francis on April 4, 2014, in which he said of an unnamed “prophet indeed”:

“Many thinkers in the Church were persecuted, as well … He was summoned in short order, his books were placed on the Index … Time has passed, and today he is Blessed. How is it, though, that he, who yesterday was a heretic, is today a Blessed of the Church? It is because yesterday, those who had power wanted to silence him because they did not like what he was saying. Today the Church, who, thanks be to God knows to repent, says, ‘No, this man is good!’ Moreover, he is on the way to sainthood: He is a Blessed.”

Of whom does Pope Francis speak?

Well, I suppose one would have to ask him to be entirely certain, and though I intend to offer my own educated guess as to whom he was speaking, the sad truth is, it doesn’t really matter.

Pay very close attention to what the Holy Father is saying!

He is shining a light on the sheer hubris of the revolutionary hierarchs vis-à-vis  their willingness to perpetrate calumny against the faithful churchmen of previous generations, all in an attempt to justify whatever novelties happen to delight their senses en route to a church of their own making.

Now, let’s take a closer look at the shameful descent that is coming into focus under Pope Francis.

Prior to Vatican II, censured theologians often publicly accepted the constraints placed upon their work by ecclesial authorities while continuing to develop their particular lines of thought behind the scenes; e.g., in theological institutes and journals, some with subversive intent, others in humility.

Moving ahead to time of Vatican II, certain theologians among those previously censured, like John Courtney Murray, were invited to serve as periti, or theological experts, to advise the Council Fathers.

In the case of Murray, he managed to succeed in having his novelties concerning religious liberty and Church-State relations enshrined in the conciliar text, and he did so by asserting, as do the majority of his defenders even today, that the position of those who had censured him relied upon an earlier teaching (articulated most clearly by Pope Leo XIII) that, although not incorrect in itself, was situated within an “historical problematic” such that changing circumstances had rendered acceptable that which was once deemed inconceivable.

Let’s fast-forward now to the man of whom Pope Francis spoke in his homily.

I suspect that he was speaking of the Founder of the “Rosminians,” or the Institute of Charity, Fr. Antonio Rosmini, a cleric whose writings were posthumously condemned by decree of the Holy Office, and confirmed by Pope Leo XIII, in 1887.

After years of pressure asserted on the Holy See by the Rosminians in order to promote the canonization cause of their Founder, the Congregation for the Doctrine of the Faith under Cardinal Ratzinger overturned the condemnation in 2001, saying in part:

“This is so because the meaning of the propositions, as understood and condemned by the Decree, does not belong to the authentic position of Rosmini, but to conclusions that may possibly have been drawn from the reading of his works.”

This action removed the obstacle from Rosmini’s cause, opening the way for him to be beatified six years later by the same former Cardinal Prefect of the CDF, Pope Benedict XVI.

If time permits, I will have more to say next week on the Rosmini situation relative to the scheduled canonizations of April 27th, but for now one notes already the progressively more negative view of the faithful Roman Pontiff Leo XIII being put forth by the post-conciliar regime.

As it relates to John Courtney Murray, Pope Leo XIII wasn’t necessarily incorrect; rather, he was simply addressing a particular situation that no long exists. Now, don’t get me wrong, this proposition is patently false, but such is the argument of Murray’s defenders.

In the case of Rosmini, we see Cardinal Ratzinger claiming that a regrettable mistake had been made in attributing to the condemned writings a meaning that isn’t really there.

In other words, Pope Leo XIII, he who once offered true teachings that were somehow time bound as it relates to religious liberty, had thus been downgraded by Cardinal Ratzinger to being just plain stupid.

You see, according the future Benedict the Abdicator, the poor Holy Father Leo XIII simply lacked the theological insight necessary to understand what Rosmini was actually saying!

If you’re disgusted already, you ain’t seen nothin’ yet.

Now we come to Pope Francis, the Generalissimo of the revolution who sees no need whatsoever to pull any punches as it concerns his animosity for tradition and those who defend it.

According to his view, Leo XIII, who articulated the doctrine of the Faith so clearly, is not simply guilty of being stupid; rather, he is guilty of “persecuting” a “prophet” and future saint! The Church, therefore, must “repent” on his behalf!

It is not enough for Francis to assume good will on his predecessor’s part; no! For him, it is plain enough that his predecessor “had power” and “wanted to silence” the poor condemned prophet; not because the Pontiff felt duty bound to defend the doctrine of the Faith, but because he “did not like what he was saying.”

So, in the course of just fifty years according to the view of the neo-modernist Captains of Newchurch, the legacy of Pope Leo XIII has deteriorated considerably from that of a teacher in a previous age, to an idiot, to a persecutor of saints.

I can well imagine the neo-con army of wannabe Swiss Guards crying foul since Francis didn’t bother to name the “prophet” of whom he spoke, much less Pope Leo XIII, but in truth it matters little if in fact he was not speaking of Rosmini, in which case I would challenge them to suggest an alternative.

In any event, looking at this pathetic situation through Catholic eyes, one cannot fail to shudder at the awareness of just how far we have fallen when the Roman Pontiff does not hesitate to commit the sin of calumny against the faithful men who defended the Faith so well in previous generations, even in the context of a homily.

God help him, and God help us.

Voris and Whiners and Posers, oh my!

The best advice Francis ever gave