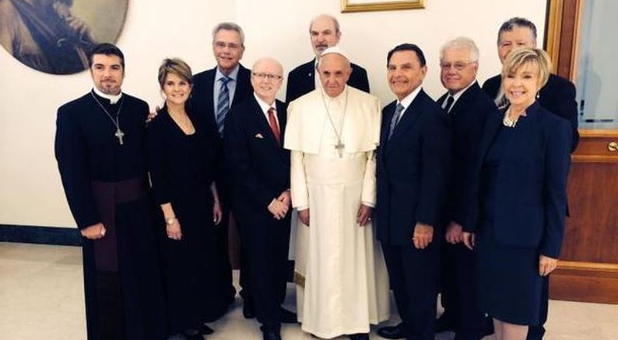 On June 24th Pope Francis hosted a three hour luncheon with nine prominent evangelical Protestants. Recent reports claiming to offer shocking details about the private meeting are making their way around the web causing considerable angst among traditionalists (aka Catholics).

According to the Register, Palmer said the delegation asked the pope “to offer us further insight into how we can make a common declaration — a public, visible joint declaration of our unity in the faith and unity in mission,” calling the effort “uncharted territory.”

He went on to say, “Pope Francis agrees with me when I say diversity is divine, but division is diabolic.”

Also quoted by the Register was Vatican spokesman Fr. Thomas Rosica who said:

“The Holy Father’s passion for authentic ecumenism flows from the heart of a seasoned pastor who has spent many years of priestly and episcopal ministry in building bridges, not walls. What he does now as Bishop of Rome is in continuity with his ministry in Argentina, and in perfect harmony with the message of the Second Vatican Council and the teaching of the Church.”

The most disturbing report comes from luncheon participant Brian Stiller, Global Ambassador of the World Evangelical Alliance, who alleged on the WEA blog that Pope Francis said:

“I’m not interested in converting Evangelicals to Catholicism. I want people to find Jesus in their own community.  There are so many doctrines we will never agree on. Let’s not spend our time on those. Rather, let’s be about showing the love of Jesus.”

It is clear to me from reading the reactions of many that it’s necessary for all concerned to take a step back to separate the facts from the allegations; what we know from mere speculation, what is likely from what is unlikely, etc. For instance:

– We DO NOT KNOW if the Holy Father is working on a joint declaration of unity with evangelical Protestants.

– We DO KNOW that Pope Francis believes that unity with heretics is possible apart from their conversion.

– We DO NOT KNOW if Fr. Rosica’s comments are as close to an official response as we can expect.

– We DO KNOW that in the matter of “authentic” ecumenism, “perfect harmony” does not exist between the teaching of the Church and the Second Vatican Council, much less the “Holy Father’s passion.”

– We DO NOT KNOW if the topic of religious diversity came up during the meeting in question.

– We DO KNOW that Pope Francis considers religious diversity a gift.

– We DO NOT KNOW if the quote attributed to Pope Francis by Brian Stiller is accurate.

– We DO KNOW that Pope Francis has little time for safeguarding the sacred deposit of Christian doctrine and even less interest in converting heretics.

At this, the point should be fairly obvious.

In the end, as troubling as these reports about the Holy Father’s meeting with the evangelical Protestants may be, they tell us nothing whatsoever about this pope, or about the terrible crisis in the Church of which he is an active agent, that hasn’t been known for quite some time.

It used to be borderline amusing to sarcastically say, “Newsflash: The pope is Catholic” whenever the media would report with feigned surprise some reaffirmation of Catholic teaching offered by the Roman Pontiff.

Today, it really is news when the present pope speaks well in defense of the true faith.

As for those occasions when the Bishop of Rome speaks and behaves like a modernist, or demonstrates an utter lack of concern for the mission of the Holy Catholic Church, or shows open disdain for her venerable traditions?

Well, that’s just Jorge being Jorge; the very same man elected by the College of Cardinals to put the brakes on whatever momentum toward tradition might dare to make its influence felt in the Church following the pontificate of Pope Benedict XVI.

– We DO NOT KNOW if there exists in the Church today even one Cardinal with the wherewithal to call on Pope Francis to refute the many occasions of scandal his words and deeds have invited by demanding that he make an unambiguous and public statement affirming his acceptance of the totality of the Holy Catholic faith.

– We DO KNOW that the time for such a Cardinal to stand up in defense of the Lord’s flock has long since arrived.

Knights of Columbus Dump Crux: Who Picked up the Slack? Part II