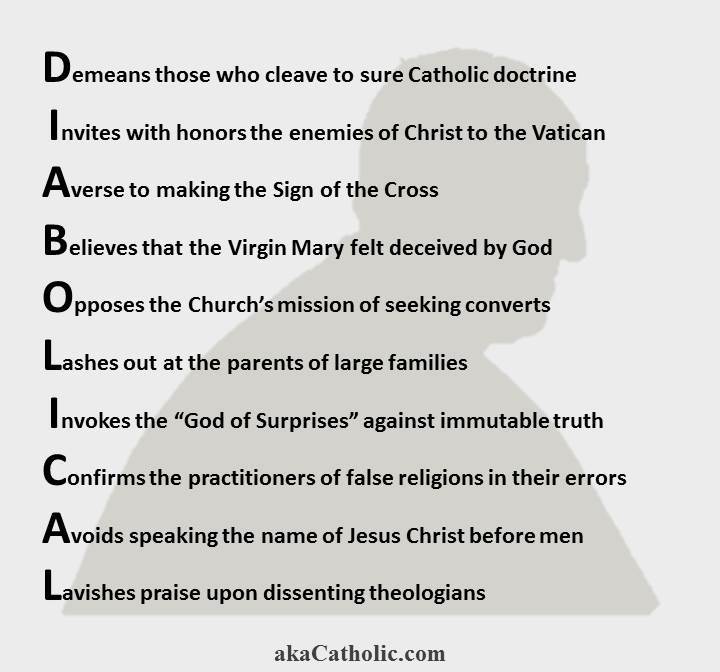 Understood as hyperbole, this is a clever way of making a valid point.

On the other hand, if taken too literally, it represents a gross underestimation of the amount of evil in the world as there are legions upon legions of men who hate the Catholic Church even as they know very well who she is, the doctrine that she professes, and her mission in this world.

Back in June, I poked a veritable hornets’ nest when I suggested that Pope Francis is one of them. Since then, he has more than validated the point; in ways far too numerous to number.

“No man can serve two masters. For either he will hate the one, and love the other: or he will sustain the one, and despise the other. You cannot serve God and mammon.” (Matthew 6:24)

If we rely upon these words of Our Blessed Lord for insight, the matter is made all the more clear.

The verses preceding the above quote from Matthew 6:24 lend critical context as Jesus offers three examples of those who have “already received their reward;” namely, men who practice piety, almsgiving, and fasting in such a way as to win the acclaim of others.

My friends, can anyone with eyes to see deny that this describes Jorge Bergoglio to a tee? 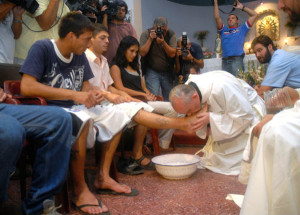 From the very inception of this dreadful pontificate the man has been a traveling carnival act of humility on display, ever ready and willing to seize a photo-op; bending his knee before heathens and heretics while the humblecam is rolling, while as yet remaining unwilling to do the same before Jesus Christ in the Blessed Sacrament.

He enjoys international, worldly, celebrity; with enjoy being the operative word.

This is Jorge Bergoglio’s mammon; it is his master, and he serves it with considerable passion.

As for “the other,” the Catholic faith, there can be nothing left but hatred.

Now, this is not to say that he hates every last thing about the Catholic faith. Indeed, at least on the surface, there is some overlap between the dictates of the true faith and the acquisition of worldly acclaim; the mammon that Francis loves so very much.

For instance, giving comfort to the sick is a corporal work of mercy in which Francis is pleased to engage.

The question is, however, in service to what or to whom?

At this point, all reasonable men of faith know the answer, even if they cannot bring themselves to admit it. This is a terrible reality to witness to be sure, but it is also a blessing.

“And we know that to them that love God all things work together unto good…” (Romans 8:28)

As Pope Francis continues his unprecedented assault on the Catholic faith, a veritable spotlight is being shown upon those who likewise place top priority on serving their own particular brand of mammon before Christ.

Think about it; by their refusal to confront this brutal attack on the Church from within at the hands of Pope Francis, how many in the sacred hierarchy have been exposed for the spineless, faithless cowards they have always been? How many supposedly intrepid Catholic media types have had their true aspirations revealed? How many among the laity have been forced to trot their Ultramontanism into the full light of day?

For this, I suppose, we can be thankful.

All of this having been said, even as Francis’ hatred of things Catholic is daily becoming more difficult to deny, there is another underlying truth that seems to be coming into increasingly sharper focus.

No doubt, whatever heat I have taken in the past for suggesting that Francis hates the Catholic faith will pale in comparison to what the following will invite. So be it…

At the end of the day, it seems objectively evident to me that Jorge Bergoglio is operating under demonic influence.

To be very clear, this is not a subjective judgment. I am not claiming that Jorge Bergoglio has made a conscious decision to “sell his soul” to the Evil One. I am not suggesting that he is truly possessed, or that he worships Satan.

And yet, neither am I saying that he is merely a victim of everyday temptations and human weakness such as men have been known to quip, “the Devil made me do it.”

No, Jorge Bergoglio’s unmitigated contempt for sacred things – doctrine, liturgy, devotions, and those who cleave to them – goes well beyond this.

It is the hallmark of that which is demonic in nature.