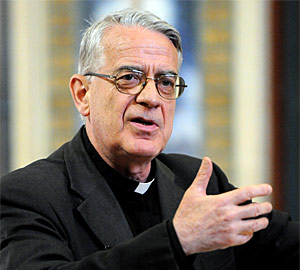 According to Brian Stiller, Global Ambassador of the World Evangelical Alliance, Pope Francis told him directly:

“I’m not interested in converting Evangelicals to Catholicism. I want people to find Jesus in their own community.  There are so many doctrines we will never agree on. Let’s not spend our time on those. Rather, let’s be about showing the love of Jesus.”

Fr. Federico Lombardi, Director of the Holy See’s Press Office, has confirmed the veracity of Stiller’s report, by his deafening silence.

He also managed to confirm the twisted priorities of the current regime.

Consider the swiftness with which Fr. Lombardi went about clarifying (if you can call it that) the latest Eugenio Scalfari interview of Pope Francis. The topics that demanded such an immediate response concerned the number of pedophiles in the clergy and the Bishop of Rome’s attitude toward celibacy.

OK, I agree, these are pretty important matters for Catholics the world over, but I ask you:

What is more important than the mission that Jesus gave to His Church; a mission that absolutely concerns an interest in converting heretics to the Catholic faith?

Brian Stiller’s quote of Pope Francis has been lingering for five days now and it remains unaddressed.

The answer is simple: Pope Francis has no interest in converting Evangelicals, or anyone else for that matter, to Catholicism.

Salza: “Ratzinger has been a double dealer for decades”