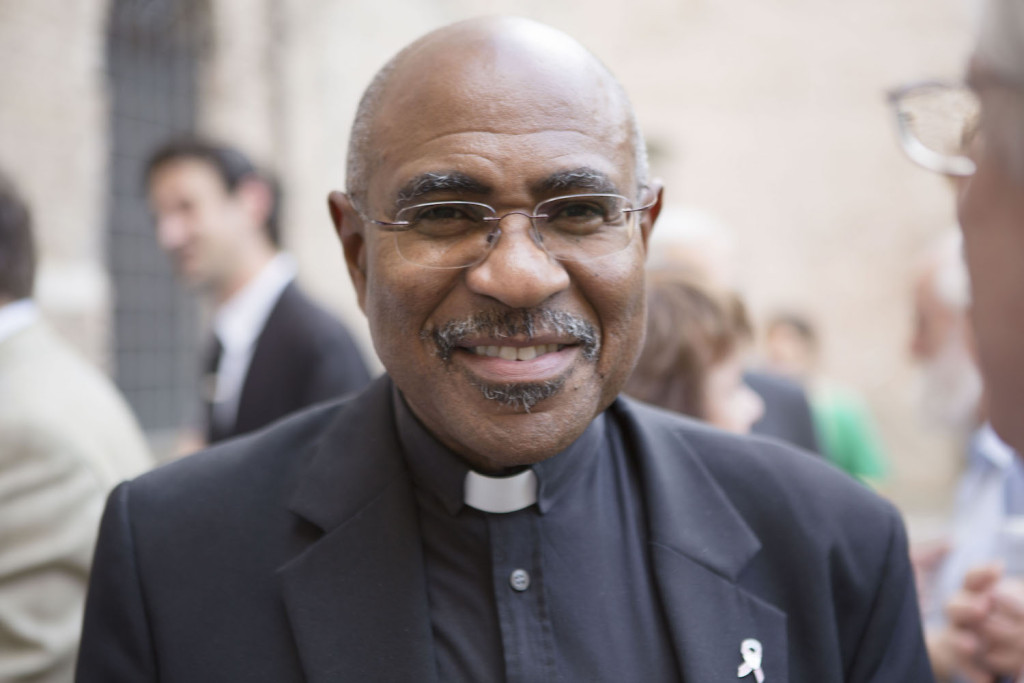 Several weeks after the publication of Amoris Laetitia, Fr. Linus Clovis, spiritual director and chairman of Family Life International NZ, published a brief, and rather anemic, response wherein he stated:

Fr. Clovis went on to say that the “nuances, implications and applications” of the document “will require time, study and prayerful reflection in order to unravel all of its implications.”

Well, it would appear that he has unraveled at least some of its implications and the scales are beginning to fall from his eyes.

In a talk given at the Rome Life Forum on May 18th, Fr. Clovis issued a scathing assessment, not only of the text of Amoris Laetitia, but of its author as well.

Some of his comments are very bold; among the most straight-forward a high-profile cleric has ever delivered in these dark Bergoglian days. Others, unfortunately, are misleading and even dangerously so.

Here, we will address both the good and the bad.

As I suggested in my last post, I am pleased to applaud that which is true when it is proclaimed, but I also intend to call attention to those things that are untrue.

Let’s begin with an example of the latter.

In his presentation, Fr. Clovis touches on Fatima, Amoris Laetitia and the antics of Francis; all in relation to the “anti-Church” about which Cardinal Karol Wojtyla forewarned in 1976. Fr. Clovis quoted the future Pope John Paul II as saying:

“We are now facing the final confrontation between the Church and the anti-Church, of the Gospel versus the anti-Gospel.”

From our vantage point some forty-one years later, it is clear that the cardinal was correct. It is also quite clear on which side he, as pope, served – it was the “anti-Church” – that conciliar bastion of humanism, ecumenism and indifferentism that gives no quarter to Christ the King, the mission that He gave to His Church, much less the message delivered by His mother at Fatima.

Even so, Fr. Clovis opened his talk by saying:

“Pope St John Paul II’s first words, on appearing on the loggia of St Peter’s Basilica, on 16th October, 1978, the day of his election, were “Be not afraid”. Now, thirty-nine years later, in light of the events that have overtaken contemporary Catholicism, his first words seem to be, not only prophetic but more, a clarion call in preparation for battle.

Whenever the pendulum of human and salvation history swings through a period of encroaching darkness and turmoil, God often inspires prophets to speak so that some light may be cast to dispel the darkness and, that the turmoil may be assuaged with hope. These prophets appealed for more trust in God’s active and caring concern for His people.”

The idea that John Paul the Great Ecumenist was a prophet sent by God to prepare the faithful for battle is not only absurd; it’s dangerous.

This pope was without question one of the men most responsible for sending “the pendulum of human and salvation history” hurtling toward the present period of darkness and turmoil.

As for him encouraging “more trust in God,” this is the same pope who over a reign of more than a quarter-century couldn’t muster up enough trust to do as the Lord asked through Our Lady at Fatima.

Later in his talk, Fr. Clovis practically admits as much, saying:

“In 1929, Our Lady specifically promised a period of world peace if the Pope, in union with the bishops of the world, would consecrate Russia to Her Immaculate Heart.  This specific consecration has not yet been done and, I believe, that, this has contributed to the present crisis … At present we are experiencing recurring afflictions and uncertainties causing fear which can be attributed to the willful neglect of the Virgin’s warning.”

God bless Fr. Clovis for stating plainly that the consecration has not yet been done. Bravo!

That said, we must not forget that John Paul II, rather than carrying out this simple request, crafted the Assisi abominations for the purpose of achieving the world peace that Our Lady promised.

Any discussion of Fatima and John Paul II must include the fact that this is the pope on whose watch the Vatican’s magnificent Third Secret deception took place, as well as the campaign to promote the outright lie that the consecration of Russia was done in 1984 according to Our Lady’s satisfaction (as if her promise of peace was itself a lie).

Heaven forbid the naïve should look to John Paul II and his disastrous pontificate as inspired by God!

Moving on to a brighter note, Fr. Clovis outlined any number of ways in which Francis oppresses the faithful; even going so far as to quote the insults that he has hurled at priests.

“In regard to their [faithful priests] persons, they are labelled as little monsters throwing stones at poor sinners, or who reduce the sacrament of reconciliation to a torture chamber or, hide behind the Church’s teachings, sitting on the chair of Moses and judging at times with superiority and superficiality.

As clerical sons, they see themselves as less deserving of a papal embrace than Italy’s arch-abortionist Emma Bonino and even less worthy of rehabilitation than renowned false prophet and global population and abortion advocate, Paul Ehrlich.

As priests, they are told they owe an apology to gays and that the “great majority” of Catholic marriages they would have blessed are invalid; in addition, they are called sayers of prayers and, for considering Mass attendance and frequent confession as important, are branded Pelagians.”

Fr. Clovis went on to call Francis out (albeit not by name) for his blasphemies against Our Lady:

“As Catholics, knowing that the Five First Saturdays were requested in reparation for blasphemy against our most Blessed Lady, they are personally affronted by the scurrilous musings that, on Calvary, where She became the Mother of all those redeemed by Christ, the Holy Virgin of Fatima perhaps, desired in Her heart to say to the Lord “Lies! Lies! I was deceived.”  As “trees of the forest shake before the wind,” so clerical hearts quake with fear at the possibility that they could actually be more Catholic than the Pope!”

He even suggested that people like me, who do not see in Francis a member of the Body of Christ much less her Head, are justified in drawing such a conclusion:

“One can hardly be blamed for judging like Isaac, mutatis mutandis that ‘Although the voice is Jacob’s, the hands are Esau’s.'”

Fr. Clovis publicly stated, in Rome no less, that we very well may have in Francis a deceiver and an imposter!

These are strong words for which I suspect Fr. Clovis will be repaid. We must pray for him.

“The advent of Pope Francis has, in the divine order of things, proved a great and true blessing.  A hidden conflict has been raging in the Church for over one hundred years: a conflict explicitly revealed to Pope Leo XIII, partially contained by St. Pius X, unleashed at Vatican II.”

Lest there be any confusion as to what Fr. Clovis is saying, he elaborated a bit later:

“St. Pius X was the first to clearly identify Modernism, that subversive rebellion against fixed moral norms and religious belief, as the synthesis of all heresies and as the hidden enemy within the Church.”

Taken as a whole, these comments are remarkable. Fr. Clovis is daring to go where very few other “full communion” clerics will. He is plainly acknowledging that the Church’s enemies and the synthesis of all heresies were “unleashed at Vatican II.”

While even the best and brightest of the cardinals continue to look to the Council as an answer to the present crisis; Fr. Clovis rightly identifies it as part of the problem.

He went on to say that modernism “has metastasised into the anti-Church,” and even went so far as to define “the conciliar Church” albeit without using the phrase:

“It is self-evident that the Catholic Church and the anti-Church currently co-exist in the same sacramental, liturgical and juridical space. The latter, having grown stronger, is now attempting to pass itself off as the true Church, all the better to induct, or coerce, the faithful into becoming adherents, promoters and defenders of a secular ideology (44).  Should the anti-Church succeed in commandeering all the space of the true Church, the rights of man will supplant the rights of God through the desecration of the sacraments, the sacrilege of the sanctuary, and the abuse of apostolic power.”

Here he sounds very much like Bishop Tissier de Mallerais.

Fr. Clovis hasn’t yet entirely connected the dots, but it is obvious:

The Council is indeed that event wherein the anti-Church, like a cancerous tumor, took hold in the Body of Christ, and the entirety of the pontificate of John Paul II was ordered toward, and succeeded in, “implementing Vatican II;” i.e., making the disease spread.

It occurs to me that one of the reasons men like Fr. Clovis and Cardinal Burke are blind to this reality, or at the very least are unwilling to address it, may lie in the fact that he is now called “Saint” – the same title by which we address the Apostles and Martyrs.

In other words, to plainly acknowledge the damage that John Paul II has done necessarily exposes his farcical canonization for what it always was; a propaganda tool used to further advance the anti-Church.

Apparently, shedding light on this reality is a bridge too far for them; at least for now.

In any case, Fr. Clovis did not hesitate to identify Amoris Laetitia with the anti-Church, saying:

“At this point, if Amoris Laetitia is interpreted “in continuity with the doctrine of the Magisterum” the conflict will continue surreptitiously as anti-Church not only flourishes best in double speak, ambiguities and uncertainties but also fears the sensus catholicus.”

So far so good, but then he added:

“On the other hand, should it be interpreted as actually contrary to the perennial Magisterum, it is difficult to conceptualise how an open break can be avoided and even more difficult to predict the fall out.”

Here, Fr. Clovis is posing questions of “interpretation” where none exist. The objective sense of the text is perfectly plain; one need only read it in order to discover that it is blasphemous and heretical.

As for “the fall out” that might proceed from declaring as much, we are not called to predict the future; we simply have a duty to remain faithful in the present no matter the challenge:

Be that as it may, Fr. Clovis provided the following answer:

“It falls to Pope Francis, whose charism is to confirm his brethren, to resolve the doubts rising in the wake of Amoris Laetitia…”

In contrast to his boldness in other areas, this is a cop out.

It is patently obvious at this point that Francis, in spite of failing to provide a formal response to the dubia, has already “resolved the doubts” in more ways than one can count. (Remember “there are no other interpretations”?)

“We will not give in where we must not give in.  We will fight, not hesitantly but, with courage; not in secret but, in public; not behind closed doors but, in the open. Audemus fidem nostram defendere! Non timemus!”

All in all, Fr. Clovis has come a long way. And yet, he still has a way to go.

Let us pray for this priest; that he will be granted the grace to complete the journey.