Home
Blog Post
‘Fatima’ the Movie: Was it worth the wait? 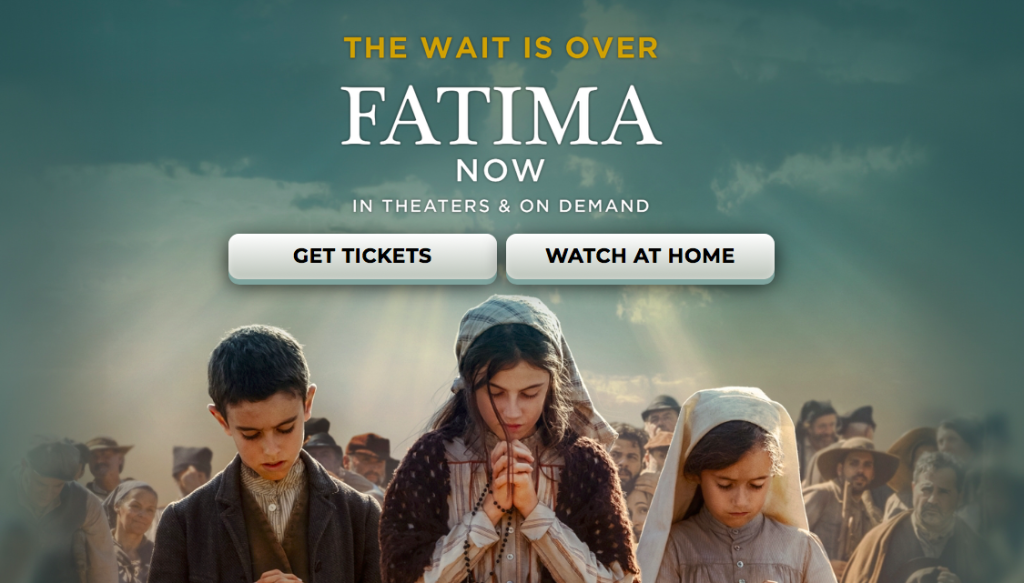 Originally slated for release in 2017 to coincide with the 100th anniversary of Our Lady’s appearances in Portugal, the movie simply named, Fatima, is finally available in theaters and streaming on-demand.

Was it worth the wait?

Admittedly, I have not seen the film, nor do I have any plans to do so (for reasons I will soon make plain), but this much I can confidently report: If you’re expecting the film to live up to its billing, all indications are you’re going to be sorely disappointed.

According to producer Natasha Howes, as reported in the Press Notes provided to the media by the filmmakers:

Part of my role on this film was to ensure that we retained the historical authenticity of the story.

We had the pleasure of working with Natasha on a previous Origin project and her keen understanding of the story and deep roots into this community made her an integral member of our team.

With the help of Howes’ unique knowledge and expertise, the filmmakers wove some lesser known details into the narrative and corrected a number of longstanding misapprehensions.

In spite of these lofty words of praise for the producer and the high expectations they invite, Fatima is about as historically accurate as the Broadway production, Hamilton.

What’s more, it gives every appearance of having been deliberately crafted to play to precisely the same audience; namely, left-leaning social malcontents with an appetite for quasi-historical fiction that serves to validate a distorted worldview that is divorced from objective reality.

Whether they truly experienced the apparitions or not, whether the miracle happened or not, we continue to relate to Lúcia and her quest.

Given that the “expert” producer of Fatima places no importance whatsoever on whether or not the supernatural events even happened at all, it only stands to reason that those most deeply immersed in the project came away with an utterly false understanding of Our Lady’s message.

For example, Croatian-American actor Goran Višnjić, who plays the mayor of Lúcia’s hometown, said that the message at the heart of the film is quite simple: As human beings, we have to be good to each other. He explained:

In other words, the Blessed Virgin’s message has nothing to do with her, you see, much less does it concern her Son’s desire to establish in the world devotion to her Immaculate Heart, as she said; rather, it’s truly nothing more than an imbecilic catchphrase:

Given that such empty slogans often appear alongside those ubiquitous “COEXIST” bumper stickers, it should come as little surprise that the filmmakers have reimagined the Fatima apparitions as an invitation to engage in Vatican II style ecumenism.

According to Director, Marco Pontecorvo:

Believers and nonbelievers can find something in this film. It carries a universal message of peace — the idea that we must all change our behavior to end violence and the madness of war.

As James Volk, a partner at Origin Entertainment and a co-producer of the film, said:

This story can be a universal bridge between people of all faiths. The innocence of these three kids helped spread a message of peace and hope to an entire generation. Perhaps it can do that again today.

The message of the film is perhaps summed it up best on the original Fatima movie website as captured above:

There has been no call for peace voiced as clearly as the message proclaimed at Fatima in 1917. The message is universal. It is a call for everyone, regardless of faith, to actively seek peace in the world through prayer.

So, if you’re in the market for a film that twists Our Lady’s message at Fatima into a prescription for such affronts to Our Lord as the Assisi abominations, invite your closest heathen, heretic, Muslim and Jewish pals to come over; get yourselves a few big buckets of popcorn and a couple of six packs, livestream the movie and make a night of it.

If, however, you’re looking for an accurate retelling of this miraculous manifestation of God’s grace – a story as yet still unfolding – do yourself a favor and avoid it at all costs.

Covid-19 and the Art of Brainwashing – Part IV