– While she has always had wolves in sheep’s clothing in her midst, the Church is under attack from within in our day in an unprecedented way.

– The current ecclesial crisis can be likened to a revolution; a modernist coup d’état that began in earnest at the Second Vatican Council. Today, the conciliar teachings, in spite of being both non-binding and demonstrably fallible, are treated by the authorities in Rome as the non-negotiable standard by which all things are measured.

– One of the primary planks that form the foundation upon which the Council’s novelties rest concerns an overblown sense of human dignity and the glorification (nay, deification) of man as summed up in the following statement:

“According to the almost unanimous opinion of believers and unbelievers alike, all things on earth should be related to man as their center and crown” (Gaudium et Spes 12).

– Having embraced the Council’s anthropocentrism (man-centeredness) as their principle guiding light, those who have exercised authority in the Church ever since, up to and including the popes, have abandoned the mission of Christianizing the world in favor of ecumenism, inter-religious dialogue, and a whole host of social justice and diplomatic activities aimed at promoting an earthbound sense of peace; all in service to man.

– Since the time of the Council on forward, the Roman authorities have all but ceased to preach objective truth, in particular, religious truth; placing top priority on matters merely natural, over and above that which concerns the supernatural.

– At the very heart of this crisis lies a Christological heresy, the adherents of which, while exploiting the language of tradition, ultimately preach a false Christ; a “diminished and distorted Christ” (cf Pope St. Pius X, Notre Charge Apostolique) effectively reduced to a mere man, stripped of His Social Kingship, made to stand shoulder-to-shoulder with idols and treated as if He has no more rights and prerogatives in society than the many false gods of this world.

– All of the above served to fuel the creation of the Novus Ordo Missae – a theologically deficient rite (in places, even demonstrably heretical) deliberately stripped of numerous venerable sacred signs in deference to the sensitivities of heretics and Jews.

– Supplanting the Traditional Latin Mass with the Novus Ordo Missae has resulted in a devastating loss of Catholic faith among clergy and laity alike in the following areas: the Real Presence of Jesus Christ in the Eucharist, the Sacrificial nature and proper ends of Holy Mass, the unique identity and role of the priest as alter Christus, and the unique identity of the Holy Catholic Church, to name just a few.

– Inherently, the Novus Ordo Missae lends itself to being a feminized, personality-driven rite that is far more adept at inspiring fleeting emotions than conveying immutable theological truths, much less a sense of the sacred. This is one of the primary reasons that Mass attendance has plummeted over the last fifty years (especially among men) and a severe vocations crisis has ensued.

– At Fatima, Our Blessed Lady foretold of these dangers in the still as yet unrevealed portion of the so-called Third Secret wherein she issued “a divine warning against the suicide of altering the Faith, in Her liturgy, Her theology and Her soul” (Cardinal Eugenio Pacelli – future Pope Pius XII).

– In addition to these warnings, Our Lady of Fatima made a request: For the pope to order the bishops of the world to join him in consecrating Russia to her Immaculate Heart; at which time humankind would be granted an unprecedented period of peace. As of this writing, this simple request has yet to be met.

– The crisis in the Church will continue until such time as the Church is blessed with a pope who will condemn the Second Vatican Council and its errors and ambiguities outright, proclaiming the Sovereign Rites of Christ the King once more, and carrying out the consecration of Russia to the Immaculate Heart of Mary according to her wishes. 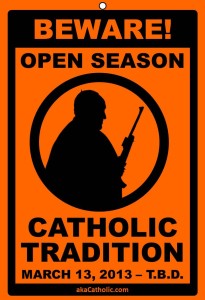 – Jorge Bergoglio is a product of the Council through and through; having been formed exclusively in its ways, he is thoroughly imbued with its narcissistic fixation on man.

– Pope Francis is determined to aggressively press the conciliar revolution forward. He has arguably done more over the last thirty months (and counting) to obscure the truth about Jesus Christ and His Holy Catholic Church than all of his post-conciliar predecessors combined.

– Pope Francis, by virtue of his words and his deeds, represents what is by far the greatest threat to the spiritual welfare of mankind present in the world at this very moment. His heterodoxy and the confusion he is creating must be met head on. “The security of the Catholic name is at stake. Wherefore, we must now break silence.” (cf Pascendi 3)

This is by no means an exhaustive treatise on life in the Church today, but if you believe as I believe that all of this is true…

I’ll go out on a limb and say that you also believe that it is imperative for people like us, who by the grace of God can see the crisis for what it is, to marshal our resources in defense of our Holy Catholic faith against every and all attacks, both for our own good and for the benefit of those who seek the truth.

For my part, it would seem that the Lord, who in His inscrutable wisdom calls upon the foolish to confound the wise, wills not only for me to forgo more worldly concerns in order to continue writing and speaking on matters of faith, but also for me to dedicate my own resources to maintaining this space as a venue for all of us to stand up for the Truth, and to edify, strengthen, and encourage one another along the way.

No doubt about it, being so called upon is a privilege that I don’t deserve, but now comes the difficult part: I have to humble myself and admit that without your financial support I will not be able to respond as I ought.

So, my friends, if you believe as I believe that this blog serves an important purpose, please prayerfully consider joining me in sustaining this effort by contributing some of your own resources in defense of Catholic tradition.

Ninety days ago I made an appeal for financial support, and I cannot even begin to express my gratitude for those of you who responded.

While only a small percentage of our regular readers did so, apart from this, discerning the Lord’s will for the future would have been all the more difficult for me – Harvesting the Fruit would have folded, akaCatholic would never have gotten off the ground, and none of us would be here right now. Even so, the future remains in question. 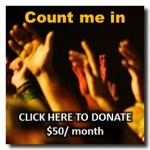 The great majority of those who have responded thus far have done so with a one-time donation. Such are always greatly appreciated. Truly. It would seem that in order to endure, however, there’s no substitute for regular monthly donations. Planning ahead and fending off unforeseen technical issues is almost impossible without them. So too is avoiding having to constantly ask for help. 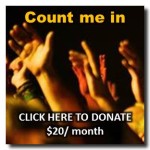 Individually, it doesn’t take much; it just takes enough of our readers deciding that this effort is worth roughly one cold beer, a McDonald’s Happy Meal, or a peperoni pizza a week. (If you live nearby, I’ll take the beer… or maybe the pizza.)

Only you know what you get out of this blog, but I can tell you that I’ve received countless 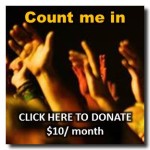 emails from clergy, religious and laity letting me know that this effort – including the comments offered by readers – is a source of enlightenment and encouragement, along with the occasional laugh, in these dark days of crisis. Priceless.

Clicking the linked images will take you to our PayPal page. If you don’t have a PayPal account, just look for the link on that page that will allow you to use any credit or debit card of your choosing.

At this, I entrust this plea and the future of this effort to the care of the Blessed Virgin Mary, that her Son may be glorified whatever the outcome may be.

A new tradservative hero is born