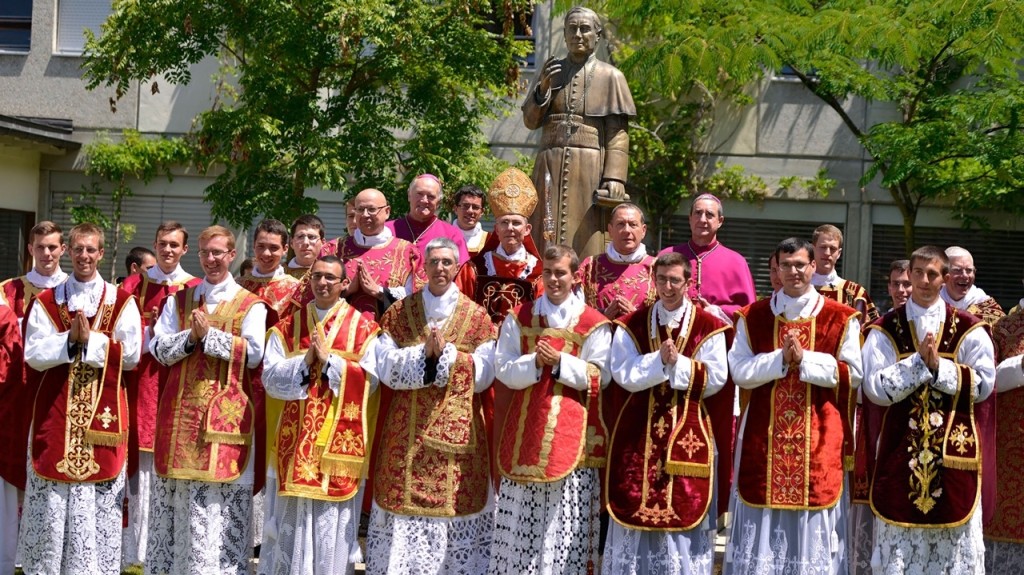 You’re not going to believe this…

The latest public statement made by the Society of St. Pius X – a communiqué issued at the conclusion of their recent four day meeting of the major superiors – is garnering criticism from the resisters.

In other news, Francis just issued his “universal prayer intention” for July and it has nothing whatsoever to do with Jesus Christ.

Seriously, if Bishop Bernard Fellay quoted a portion of the Bible verbatim, some of these folks would find a reason to accuse him of impropriety.

The communiqué is concise enough to publish here in its fullness:

The purpose of the Society of Saint Pius X is chiefly the formation of priests, the essential condition for the renewal of the Church and for the restoration.

In less than 300 words, this statement seems to sum matters up about as well as anyone could have possibly expected – it articulates the Society’s purpose; the necessity of denouncing errors, even those of the pope; calling attention to humanism’s usurpation of divine worship; the Social Kingship of Christ; the need for prayer and penance…

There’s not much here to criticize.

Unless, of course, one’s default position with respect to the SSPX is to complain and accuse; like a certain Fr. Girouard (don’t feel bad, I never heard of him until now either), a “resisting” priest whose letter of response crossed my Facebook page whining that the “communiqué doesn’t reveal any practical resolution.”

As the communiqué suggests, the resolution to the present crisis isn’t going to be the fruit of some clever strategy formulated on the part of mere men. Rather, it will only be realized at such time as the triumph of the Immaculate Heart of Mary occurs – the requirements of which were given by Our Lady at Fatima, and the hastening of which is addressed in the communiqué.

As for more “practical” matters, the communiqué has plenty to offer. (See list above.)

And then there’s the resisters’ favorite topic; the matter of the Society’s canonical recognition…

How many more ways does Bishop Fellay have to say it?

“The Society does not seek primarily a canonical recognition.”

“If we’re put in a choice between keeping the faith or making their compromise, it’s clear: I’m not going to compromise.”

Can we please put to rest all of the calumnies claiming that Bishop Fellay is interested in negotiating the terms of a surrender at the cost of tradition?

Now let’s talk about what the communiqué does not say.

Some commentators are suggesting that the Society has stated that it will reject any and all offers of canonical regularization unless it comes from “a Pope who concretely favors the return to Sacred Tradition.”  (See communiqué item #3.)

Father Z, for instance, wrote, “This sounds as if they won’t agree to any kind of unity until this or a future Pope behaves in the way they determine is acceptable.  Peter must conform to their expectations.”

No, the communiqué simply says that “a Pope who concretely favors the return to Sacred Tradition” is going to be necessary in order “to restore all things in Christ.”

It also says that the Society will use “the means that Divine Providence gives to it” to spread “the social reign of Our Lord Jesus Christ.”

As I read it, this statement does not preclude the possibility that these “means” just might include a unilateral action on the part of Rome granting canonical recognition.

The question has been asked (and it is a fair one) how the highly suspect validity of the conclave that gifted the Church with the human wrecking ball known as Francesco factors into the matter.

In the present case, canonical recognition amounts to formal acknowledgement of that which is already objectively true – the SSPX is entirely Catholic.

As the communiqué suggests, the Society is due this canonical recognition by right as a matter of justice. Whether or not that acknowledgement ever comes, however, the fact remains – the SSPX is entirely Catholic.

The reason this recognition matters so much is that souls are at stake.

The faithful deserve to know the objective truth about the Society’s relationship with the Church; so they may have no reservations about receiving the spiritual aid that the SSPX administers unto their salvation.

If canonical regularization without compromise should come from some action prompted by the blasphemous Argentinian heretic in white, so be it.

But, he’s a blasphemous heretic!

You bet he is, but think of it this way:

If a tornado is heading for your house, does it really matter whether that crucial bit of information reaches you and your loved ones via a state-of-the-art HD TV or a beat up old AM radio that barely functions?

No, of course not. What matters is that the information is made known so you can save yours and your family’s lives.

In the present case, what matters is that the Catholicity of the SSPX be made widely known so souls can seek refuge therein in order to save their eternal lives.

(NOTE: The risks and rewards of canonical recognition have been discussed at length elsewhere on the blog. I don’t wish to rehash them in their entirety. At present, we are discussing the impact Benedict’s whimsical designs for the Petrine Office, and Francis highly questionable validity, may have on the matter.)

It is my belief that the Society will accept that recognition; even if it comes from a Pope who does not concretely favor a return to tradition, provided, of course, that adequate measures are put in place for its protection moving forward.

It is also my belief that the Society should accept such recognition.

Again, at the end of the day, all that this would mean is that the objective truth of the Society’s Catholicity is being formally acknowledged and made more widely known.

Indeed, an argument can be made that acceptance of a “papal” act unilaterally recognizing the Society, even without any compromise on its part, might in some way lend legitimacy to the alleged pontificate of Francis (about which I have made my own thoughts clear).

I don’t dismiss these concerns. I think they are entirely valid.

That said, let’s be clear:

The confusion that exists in our day with respect to the present state of the Petrine ministry has nothing to do with the Society’s canonical status; something it is owed by right as a matter of justice.

Perpetuating the injustice toward the SSPX wherein the objective truth about its relationship with Eternal Rome (the Church) is left unacknowledged will do absolutely nothing to remove the confusion that exists concerning the papacy.

Furthermore, if the SSPX was to reject unilateral canonical recognition because the pope (or alleged pope) is a scoundrel, it would only serve to further deprive souls of the aid needed to attain to Heaven.

Look, I get it… There are many moving parts that are contributing to the present ecclesial crisis, thus giving rise to confusion and disagreement.

It seems to me that the task of discerning what is best in any situation is always made easier when we recall that the mission that was given to the Church by Our Lord involves the salvation of souls.

That’s the crux of the matter.

Forget all the “what ifs…”  No matter what may come in the future, it is clear that the SSPX has a duty to respond by continuing to defend the true Faith; just as it has from its inception.

In the present case, one need only ask what impact the canonical regularization of the SSPX will have on the salvation of souls; will it be positive or negative?

I’ve stated my opinion. What’s yours?

The Case Against “ABORTION CONSENSUS”  – The Prolife Movement at the Crossroads