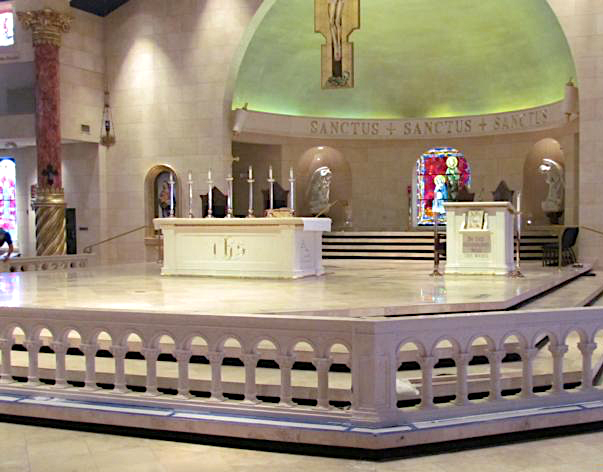 In his “Open Letter to Confused Catholics,” Archbishop Marcel Lefebvre discussed the scandalous nature of the Novus Ordo, writing:

Furthermore it can be said without any exaggeration whatsoever, that the majority of Masses celebrated without altar stones, with common vessels, leavened bread, with the introduction of profane words into the very body of the Canon, etc. are sacrilegious, and they prevent faith by diminishing it. The desacralization is such that these Masses can come to lose their supernatural character, ‘the mystery of faith,’ and become no more than acts of natural religion.

At this, I am reminded of a daily Novus Ordo Mass that I often attended some years ago, where the priest always used common vessels (made of crystal) and introduced profane words into the Canon (“He took bread and, giving thanks, broke it, and gave it to his ‘friends’ saying…”).

Such Masses, according to the Archbishop, prevent faith and are sacrilegious. He also said that they can even lose their supernatural character – a very serious charge, indeed.

Think about this for a moment. If, during the celebration of a Novus Ordo Mass, Our Blessed Lord is truly made present in the Most Holy Eucharist, then it is safe to say that the “supernatural character” of the rite remains; in spite of whatever offenses against the Faith may be present therein.

If what the Archbishop states is true (and in my opinion it most certainly is), however, then it is reasonable for the faithful to harbor reservations on this point; i.e., they may reasonably entertain doubt as to whether or not Christ is truly present in a Novus Ordo Communion.

Lest anyone imagine that this describes an exceptional situation, Archbishop Lefebvre went on to broaden his commentary concerning the faithful’s reservations to include every Novus Ordo Mass, stating:

The New Mass, even when said with piety and respect for the liturgical rules, is subject to the same reservations since it is impregnated with Protestantism. It bears within it a poison harmful to the faith.

Archbishop Lefebvre was simply pointing out what every so-called traditional Catholic today most certainly realizes; the Novus Ordo Missae, no matter how holy the priest, regardless of how reverently he offers it, and in spite of his sincerity of intention to do what the Church does, is poisonous and therefore a mockery of the Sacrifice of Christ.

So, dear reader, do you agree with Archbishop Lefebvre’s assessment of the Novus Ordo?

If so, consider the following common scenario: A diocesan Traditional Latin Mass that is celebrated at a parish that also offers the Novus Ordo.

Question: Does the priest at the Traditional Mass take care to consecrate a sufficient number of hosts for those present, or does he also make use of what is reserved in the tabernacle; including hosts that remained after a Novus Ordo?

If the latter, then there is reasonable cause for concern that some of the faithful at that Traditional Mass may be receiving ordinary bread. In other words, in such a situation, the faithful – the thoughtful ones, anyway – cannot help but harbor reservations similar to those that are attached to the Novus Ordo itself.

Bear in mind, here we are simply discussing reservations. In other words, it is not necessary for one to conclude with certitude that the Novus Ordo hosts are mere bread; rather, our concern stems from the presence of doubt, which is well-justified based upon the grave deficiencies of the rite itself.

In the above scenario, more specifically, the faithful who assist at the Traditional Mass would have no way of knowing if the Novus Ordo priest used common vessels, introduced profane words into the consecration, or performed any other acts that could serve to render the rite devoid of supernatural character.

For those individuals who find themselves in this situation and are inclined to dismiss this concern because the Novus Ordo Mass is “valid,” Archbishop Lefebvre would suggest otherwise. He writes to confused Catholics:

Your perplexity takes perhaps the following form: may I assist at a sacrilegious Mass which is nevertheless valid, in the absence of any other, in order to satisfy my Sunday obligation? The answer is simple: these Masses cannot be the object of an obligation; we must moreover apply to them the rules of moral theology and canon law as regards the participation or the attendance at an action which endangers the faith or may be sacrilegious.

Here, the Archbishop makes plain the fact that validity alone does not render other reasonable concerns about the Novus Ordo null.

Question: In the case where the priest offering the Traditional Mass does take care to consecrate enough hosts for all present, does he also take care to keep any undispensed Sacred Hosts separate from those “Novus Ordo” hosts that may be reserved in the tabernacle?

If the priest in question also celebrates the Novus Ordo, chances are very good that he does not, as doing so would be tantamount to admitting his own doubts concerning whether both constitute the Real Presence of Christ. And yet, if the Sacred Hosts are commingled, without distinction, with what may be just ordinary bread, then surely Our Lord’s Body is not being handled with due reverence.

Consider the following question as well:

Question: Does a church building wherein the Novus Ordo is routinely celebrated stand in need of being rededicated?

This question may be reworded to ask whether or not a church has been desecrated by virtue of the fact that a sacrilegious rite, one that makes a mockery of the Sacrifice of Christ, is routinely celebrated within.

According to the new Code of Canon Law:

Sacred places are violated by gravely injurious actions done in them with scandal to the faithful, actions which, in the judgment of the local ordinary, are so grave and contrary to the holiness of the place that it is not permitted to carry on worship in them until the damage is repaired by a penitential rite according to the norm of the liturgical books. (Canon 1211)

Sacred places lose their dedication or blessing if they have been destroyed in large part, or have been turned over permanently to profane use by decree of the competent ordinary or in fact. (Canon 1212)

Recall the words of Archbishop Lefebvre who said that the Novus Ordo is impregnated with Protestantism, bears within it a poison harmful to the faith, and is subject to reservations even when said with piety and respect for the liturgical rules.

This certainly sounds like what the Code of Canon Law describes as a gravely injurious action, contrary to the holiness of the place, that does scandal to the faithful.

And while the routine celebration of the Novus Ordo in a church building does not constitute it having been turned over permanently to profane use, one may rightly insist that a religious rite that poses as the Sacrifice of the Mass, in spite of bearing “a poison harmful to the faith” (to quote the Archbishop once more), is by far the more scandalous.

The Ceremonial of Bishops states that a church building stands in need of rededication, which would follow a penitential rite as an act of reparation, when:

Crimes committed in a church affect and do injury to the entire Christian community, which the church building in a sense symbolizes and represents. The crimes in question are those that do grave dishonor to sacred mysteries… (cf Ceremonial of Bishops, no. 1070)

Yes, Canon Law does state that it falls to “the judgment of the local ordinary” to determine whether or not a church has lost its dedication, and clearly no bishop that approves of the Novus Ordo will draw that conclusion.

Even so, the local bishops’ failure to recognize the above-mentioned crimes in no way makes the Novus Ordo any less sacrilegious, any less poisonous, or any less scandalous; i.e., it still does dishonor to sacred mysteries and is a grave offense against Christ. Is this not the very reason why “traditionalists” would not be caught dead at a Novus Ordo?

And yet, many of us assist at the Traditional Latin Mass in a parish or chapel that routinely plays host to this rite; not infrequently, celebrated on the very same altar.

Now, please don’t get me wrong. I am not suggesting that one should avoid such Masses. I am simply raising some uncomfortable questions that I’ve not seen addressed elsewhere, but which merit our consideration; the most pressing of which concerns Holy Communion.

These questions are perhaps not easily answered, but such is the sad state of affairs in our day when refuge is sought by many and found by relative few.