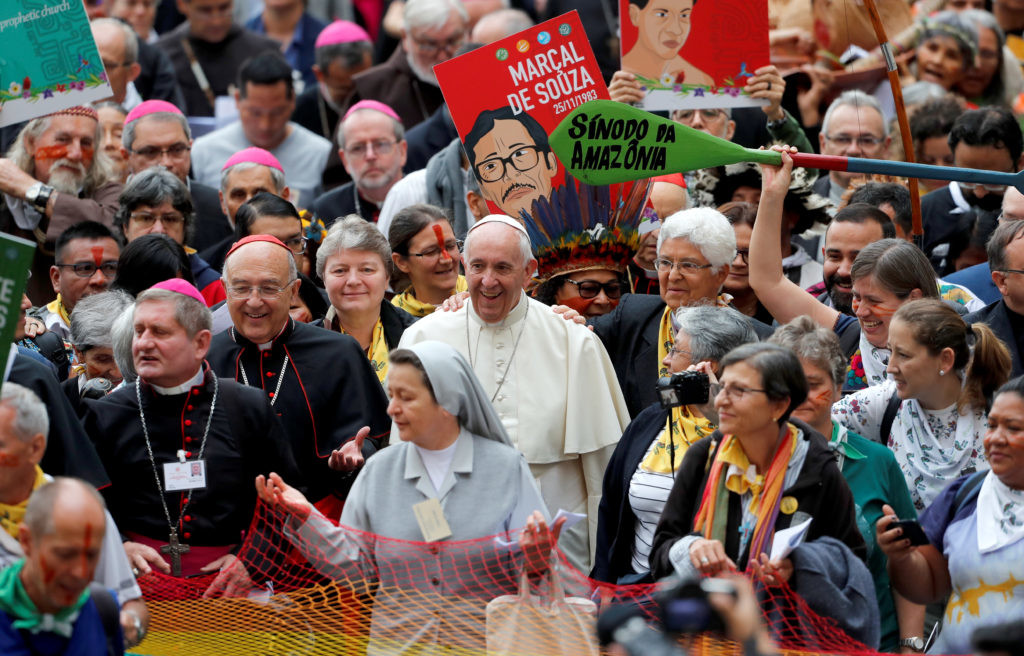 In yesterday’s Amazon Synod briefing, Vatican News reported on a presentation given by Bishop Wilmar Santin, O.CARM., of Itaituba, Brazil, in which he recounted a conversation with His Hereticalness:

The Pope said he [Santin] should start with what the Church already allows: the permanent diaconate.

Acording to the Vatican News report:

They developed a plan with an Italian priest who had worked in the indigenous missions in Amazonia all his life. The first step involved creating Ministers of the Eucharist, then ministries that Deacons perform in order to move toward being ordained as Deacons.

NB: The purpose of this program has been plainly revealed; namely, to move candidates toward ordination. The report continues:

They chose to begin with the Ministry of the Word, as the Eucharist cannot be preserved in these territories for very long. Formation for Ministers of the Word began in November 2017. 20 men and 4 women were appointed and began preaching the word of God in their own language.

Get that? Under the direction of an unnamed Italian priest, whom one can be certain operated with the blessing (if you will allow) of conciliar Rome and the God of Surprises (aka Jorge Bergoglio), the diocese developed and began a formation process for future deacons in 2017, the first class of which includes four women!

Longtime readers may recall a post in this space (which, if I may say so, is well worth revisiting) in February 2017 stating:

There are even rumors coming out of Rome that it has already been decided that the diaconate for women will be a reality as early as November 2017.

Well, then, it is a rumor no more; even the starting date was correct if we understand the “reality” mentioned to mean women in diaconate formation.

The Vatican News report goes on:

This past March, Bishop Santin said he returned to that village and found another 24 Ministers of the Word, making a total of 48, who preach in their local language.

Though the report doesn’t tell us how many of the twenty-four more recent candidates are female, if the ratio holds, there are now more than a dozen women on the fast track to “ordination” in just this one village alone, and there’s no reason to imagine that this charade is limited to only one place.

This will help the people very much, concluded Bishop Santin and in the future, hopefully, the ordination of deacons will be possible.

This information comes one day after Bishop Emeritus Erwin Kräutler of Xingu, Brazil went on record telling Edward Pentin of National Catholic Register, “Many of the bishops [at the synod] are in favor of women deacons.”

When asked whether he sees the Synod as a means to achieve the ordination of women to the priesthood, Kräutler replied, “Maybe a step to.”

The jig is up, folks; the conciliar church is going to “ordain” women to the diaconate with an eye toward eventually creating women priests. The only question that remains concerns at what point in the future this will happen; provided, of course, that Our Lord doesn’t destroy the counterfeit church first.

Assuming that He does not, just imagine the lot of our conservative friends who dwell in Novus Ordo Land and the shock value of women all gussied up in their vestments reading the Gospel, assisting at the altar, imparting their blessings…

I say bring it on. The sooner this happens, the sooner more eyes will be opened to the fact that neither the Novus Ordo Missae nor the conciliar church are the least bit Catholic.

As Bishop Santin said, this will help the people very much!