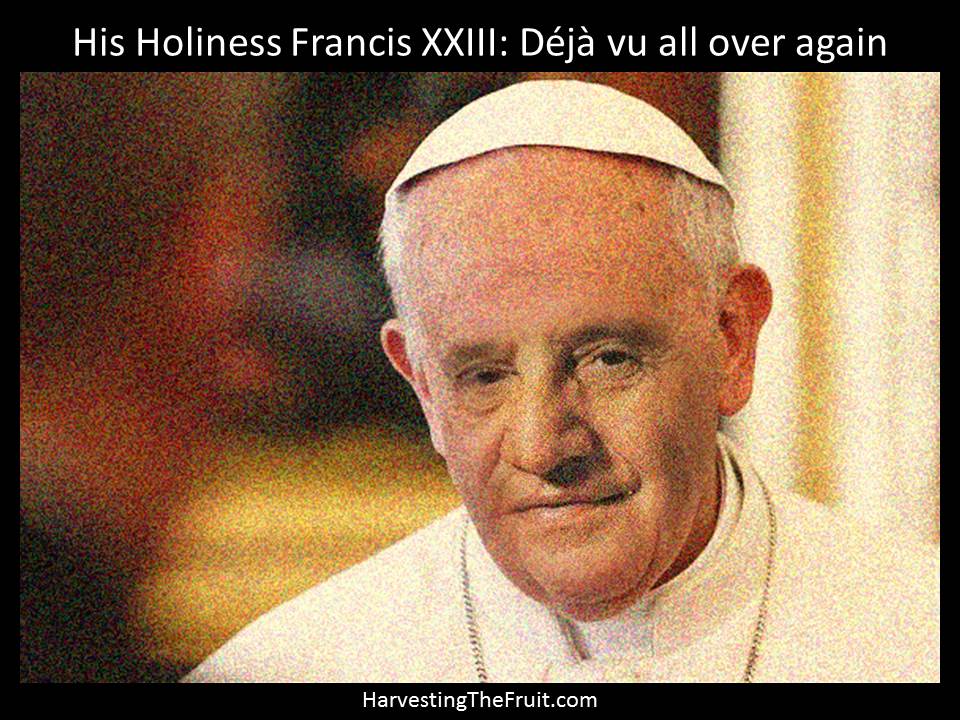 This just in: Pope Francis had no idea that the Relatio was going to the media; in fact, the poor Pontiff was entirely unaware of its contents. And if you believe that, please, send me a postcard from Lalaland; I hear it’s beautiful this time of year.

Seriously folks, we’ve seen this movie before; back in 1959, January 25th to be exact.

Pope John XXIII, while celebrating Holy Mass at the Basilica of St. Paul Outside the Walls, with seventeen cardinals present, announced his plan to convene the Second Vatican Ecumenical Council. Unbeknownst to the stunned clerics at the time, media outlets around the world had already broken news of the Council’s calling. In fact, Roman cab drivers knew about the Council even before they did.

As a result, any intentions the cardinals may have had about consulting with the Holy Father (that is, after all, their role) about the relative wisdom of such a convocation absent the presence of a doctrinal crisis were effectively put to rest; by the time they left the church building, it was already too late to put the toothpaste back in the tube.

A similar thing took place on Monday with the publication of the Synod’s Relatio.

Fr. Lombardi can obfuscate and deny all he wants, but I don’t believe for a moment that the same pope who fawned over Cardinal Kasper’s presentation given at the Consistory of February 2014, almost as if he had written the text himself (and for all intents and purposes he may as well have) somehow lost his handle on the proceedings.

From the very first days of his pontificate, Pope Francis has been channeling his inner John XXIII; almost to the point of appearing to live out a secret little dream of being an updated version of the “Good Pope John.”

From his down to earth “every man” persona all the way to his new found plumpness, Francis gives every impression of imagining that he is the next great reformer of the Catholic Church after the model of he who opened the windows of St. Peter’s thereby allowing the modernist winds to blow about the sanctuary at will.

If I were a betting man, I’d wager that Pope Francis not only knew very well the contents of the Relatio prior to its release to the worldwide media, he insisted that it be so released prior to sharing it with the Synod participants themselves.

Otherwise, the humble Bishop of Rome, the same who has no problem dictating such papal details as his living quarters, modes of transportation, and even the kind of passport he carries, would have denounced these goings on. He has not for the simple reason that they have gone, thus far, according to his very own plan.

In any case, whether or not I am correct, an appreciable amount of damage has most certainly been done.

The Relatio has not only ratcheted up global expectations, it has effectively guaranteed that those expectations will be met in local churches the world over.

You see, by greeting the travesty of Monday, October 13th with silence, Pope Francis has given every self-respecting modernist a veritable wink-and-nod, and you can bet your favorite Neo-Pelagian rosary that none of them missed it. This is far more than they ever needed in order to feel entirely justified in carrying out their own gay-friendly, adultery-embracing, mission of mercy.

That said, no matter how many Cardinal Burke’s come forward in the days ahead, short of divine intervention there is no scenario by which Pope Francis is just going to quietly allow authentic Catholic doctrine and discipline to derail his mission to build upon the “profound and serene” theology that was dispensed from the mouth of his proxy Cardinal Kasper back in February.

The only questions that remain concern how he will go about enforcing his will on the Church, and whether or not Our Lord will allow it.

Say what you will about Francis, at least he has integrity