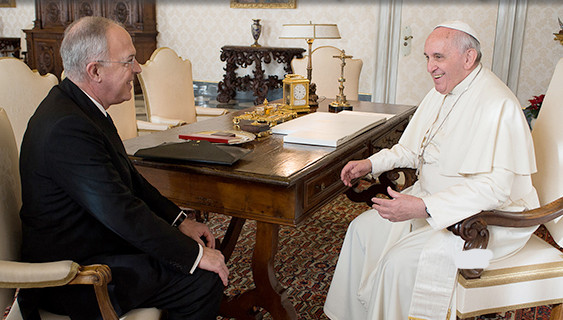 The Knights of Columbus just concluded their Supreme Convention in Philadelphia where Vatican Secretary of State, Pietro Cardinal Parolin, offered a greeting from Pope Francis which read in part:

The cornerstone of these [American freedoms that the Holy Father considers worthy of defense] is religious freedom, understood not simply as the liberty to worship as one chooses, but also, for individuals and institutions, to speak and act in accordance with the dictates of their conscience.

To the extent that this right is menaced, whether by invasive public policies, or by the growing influence of a culture which sets alleged personal rights above the common good, there is need for a mobilization of consciences on the part of all those citizens who, regardless of party or creed, are concerned for the overall welfare of society.

The degree to which the current crop of leaders in Rome is diabolically disoriented is utterly staggering.

In their minds, infected with conciliar improprieties, every individual human being has a God-given right to worship whatever false deity their corrupted little consciences can conjure up; a proposition clearly and consistently condemned by numerous popes.

While the undernourished might find in the above statement a praiseworthy counter to the strategy, popular among liberals, to supplant “freedom of religion” with “freedom of worship,” notice that the liberty of the Holy Catholic Church is reduced in this treatment to that which must only be tolerated, her doctrines to little more than opinions, and her precepts to acceptable modes of behavior that are strictly optional.

All doubt as to the new regime’s determination to treat all “conscience-driven” religious convictions as equals apart from some ill-defined notion of the common good (regardless of their relationship to the truth – read: Jesus Christ), is all-too-evident in the call for the “mobilization of consciences on the part of all … regardless of party or creed.”

So, your Jewish creed contends that Jesus Christ is merely a man?

Your Muslim conscience tells you that the Qur’an is divinely inspired?

You’re of the party of those who worship Mother Earth?

These apparently petty differences in religious belief matter little to the men of newchurch who speak as if “the overall welfare of society” can be well-served when the enemies of Jesus Christ and their deeply held “convictions” are granted equal status with that of those who are faithful to Him.

In fact, they’ll even go so far as to argue for the right of false religionists to thumb their nose at the Almighty provided only that they’re willing to stand up for the right of Catholics to similarly act according to their chosen beliefs.

As for the Knights of Columbus themselves, Cardinal Perolin said:

[Pope Francis] asked me to convey his warm good wishes to all present, together with the assurance of his closeness in prayer.

As he prepares to visit Philadelphia next month for the Eighth World Meeting of Families, the Holy Father expresses deep appreciation for the steadfast public witness which your Order has borne to our Christian understanding of marriage and the family.

Let’s talk about that “steadfast public witness” relative to marriage and family, shall we.

The fact of the matter is that American “catholic” political candidates that support the abominations of abortion and so-called “gay marriage” have long been able flaunt their membership-in-good-standing in the Knights of Columbus as evidence of their Catholic bona fides with nary a peep from the “Order.”

These are the same godless frauds who then ascend to public office to cast their votes in favor of the homosexual takeover of society, while also earmarking more than half-a-billion tax payer dollars per year for Planned Parenthood’s use so that they can continue procuring “intact fetal cadavers” for sale like common commodities.

One might argue that this particular petty detail is unworthy of notice in Rome thanks to the fact that the Knights pour so much cash of their own into the Holy See’s coffers as to have effectively purchased a pass, but this is to miss the central point.

Truly, the voice of Holy Mother Church, established by Christ the King to teach the nations “all things whatsoever that He commanded,” has fallen all but silent in our day; her leaders so weak-kneed and soft bellied that they dare not proclaim the unadulterated truth with clarity lest they fail to find favor with the men of this world.

In short, the preponderance of the sacred hierarchy simply has no intention whatsoever of carrying out the mission that Christ gave to His Church. The “Order” of the Knights, in their darkness (in spite of having certain faithful individual members), is precisely the sort of organization that rises to prominence under such dreadful circumstances.

Surely, Our Lord will bring this mutiny to an end at some point, and rest assured, it will be painful for both the guilty and the innocent when He does.

The “God of Surprises” strikes again – or not