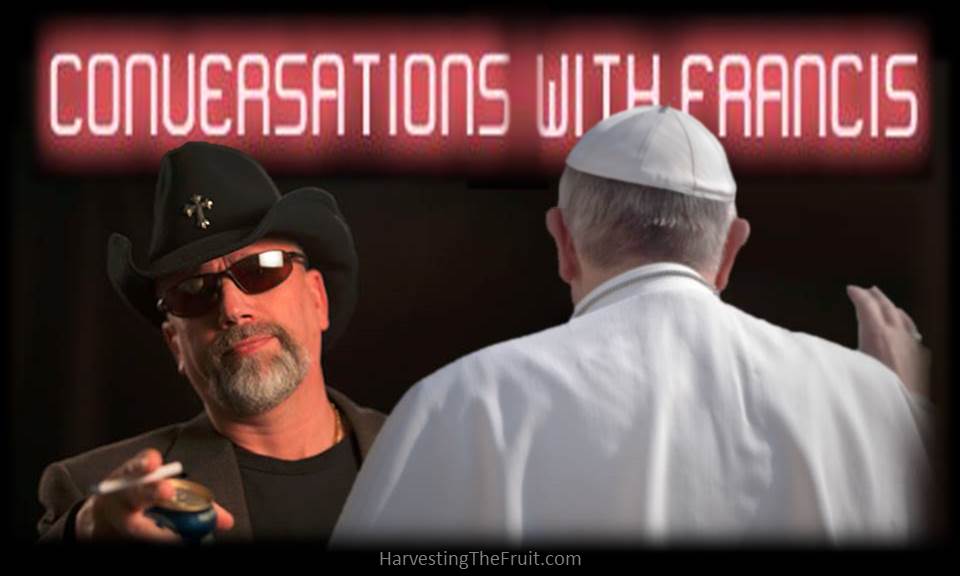 Today I’d like to launch a new feature called Conversations with Francis. Whether it’s a one-time thing or not remains to be seen.

For better or worse (and we all know which one), we have a pope who frequently expresses himself with the kind of theological precision that one might expect from a guy in a bar mixing it up religious with his buddies over a couple of cold ones.

Thanks to the efficiency of global communications, the pope’s words are almost immediately broadcast to the waiting ears of impressionable people worldwide, and this on a near-daily basis.

As you well know, it’s not uncommon for these informal one-way “discussions,” which often pertain to important matters of faith and morals, to contain ideas that are ambiguous, misleading and sometimes even flat out erroneous.

With this in mind, it occurs to me that injecting a reasonably well-formed Catholic voice into these papal soliloquies just might provide a degree of clarity for those who are listening in, sincerely seeking the truth.

At this, I’ll take my place on the other side of the table to chat with Pope Francis about today’s Santa Marta homily, and we’ll see how it goes.

Francis: It’s true, Jesus has saved us all, but not in a general fashion. All of us, each one with their name and surname. And this is our personal salvation.

Louie: Jesus has saved us all? Papa, please! Being “saved” refers to the work of salvation; a work still unfolding in the lives of individual people here in this vale of tears. That’s why St. Paul could encourage the Philippians, and us, “work out your salvation in fear and trembling.”

Francis: I am truly saved, the Lord looked at me, gave his life for me, opened this door, this new life for me and each of us can say ‘For me.’

Louie: As Ronald Reagan would say, there you go again! Seriously though, and with all due respect, you’re confusing salvation with redemption – which, by the way, is a work as yet still being carried out in the life of the Church, in a most profound way in the Holy Sacrifice of the Mass, but we’ll save that for another conversation.

Look, Holiness, by His Cross and Resurrection, the Lord redeemed us; that’s what it means to say, “He opened this door.” And yet, one may either walk through that door, or not. Those that do are saved; those that do not are lost.

Francis: But there’s a danger of forgetting that He saved us individually but at the same time as part of his people or community.  His people.  The Lord always saves his people.  From the moment he calls Abraham and promises to make them his people. And the Lord saves us as part of this community.  That’s why the writer of this Letter (to the Hebrews) tells us: ‘Let us be concerned for each other.’

Louie: OK then, I’m concerned for you. No more Châteauneuf-du-Pape! No, seriously, want another one? I got this.

Anyway, in his Epistle to the Hebrews read at Mass today, St. Paul is telling his fellow Jews that they are not saved! So much for “always saving His people,” eh! He tells them that in order to be saved, they must leave behind the Old Law and embrace the New Covenant established by Christ, since this is the only means of salvation.

Louie: It’s true that there is no salvation outside the Holy Catholic Church, this Mystical Body of Christ of which we are called to be members. So, if by “privatizing” you’re referring to the protestant who behaves as a free agent, detached from the Church and her visible head, that’s you big guy, confident that he is saved, then you’re entirely correct.

Louie: Hahahahha! Sorry. For a minute there I thought you said “communicate clarity.”

Alright, I think I get it now. Faith, hope charity… You’re speaking specifically of the baptized, since it is in baptism that we receive these theological virtues, right? You’re saying that we must be concerned for the other baptized individual’s salvation as well as our own, right? Well then, yes, I agree! We must communicate the faith, striving like St. Paul did to convince others to accept the promise of salvation made available only through Christ in His Holy Catholic Church. One might even say that we are called to proselytize. Is that what you’re saying? Please tell me it is!

Francis: If within a particular community there is no communication between people and no encouragement is given to everybody to practice these three virtues, the members of that community have privatized their faith. Each of them is looking for his or her personal salvation, not the salvation of everybody, the salvation of their people.

Louie: Are you saying that “communicating the faith” means doing so only “within our own particular community” or “whatever it is”? You’re losing me again.

Francis: And Jesus saved all of us but as part of his people, within a Church.

Louie: Well, again, it’s more accurate to say that Jesus offers salvation to all through the Church, but I have to say, Holy Father, now I’m encouraged! I can’t wait to hear you call the heathens, heretics, and Jews to enter the Church so they might be saved!

You do mean to speak of the Catholic Church, right? In any case, can you give us an example of how people who “privatize” salvation behave? I’m not sure I ever met one.

Louie: Oh, I see now! You’re referring to people like me; those “self-absorbed Promethean, neo-Pelagians,” otherwise known as those who hold firm to the doctrines of the faith, think and feel and live according to the mind of the Church as expressed throughout the centuries, and who long to worship as did their ancestors for many generations, etc. Gotcha.

Francis: When these small groups are created within the community of God’s people, these people believe they are being good Christians and also are acting in good faith maybe, but they are small groups who have privatized salvation.

Louie: Really, Holy Father? All of this simply to tell me and other tradition-minded Catholics to let go of the rich doctrinal and liturgical heritage that nurtured so many previous generations? Seriously? In exchange for precisely what; the warm and fuzzy feeling that comes from replacing evangelization with endless dialogue, and acting as if the mission of the Church extends no further than meeting the temporal needs of the poor?

No thanks; I have a better idea. How about you leave all of that earthbound nonsense behind and join us!

Alright, bottoms up. I have an early day tomorrow.