Home
Blog Post
Concerning Russia’s errors: What are we to do now? 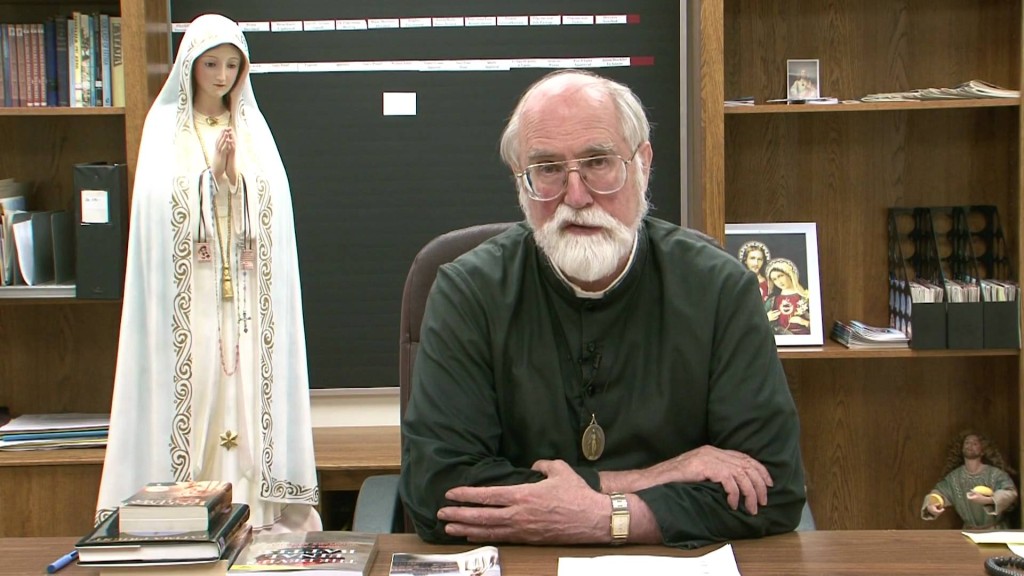 Shortly after publishing Cornelia Ferreira’s article, Fatima Through the Lens of Vatican II: As Illustrated by Raymond Cardinal Burke, I received an email from a longtime supporter voicing his sincere opinion that doing so was a mistake.

It occurs to me that expounding upon our exchange here may prove helpful as the substance of his opinion appears to be shared by any number of others; including some persons well-known.

The centerpiece of his argument is as follows:

You and I might recognize the Council, the New Mass, and the New Evangelization as dangerous, but we both know that this is a very difficult reality for most conservative Catholics to accept. They’ve been lied to for so long that they have no idea what to believe. So rather than alienating them from Fatima even further, wouldn’t it make more sense to set those arguments aside for now and to treat Cardinal Burke, a man admired by many, as an ally in calling for the Consecration? I mean, this is what all of us want, isn’t it?

Obviously, the argument has some appeal as both the Remnant and the Fatima Center seem to be on board with it (as my interlocutor was pleased to point out).

In a nutshell, one of the problems with the approach outlined above is that Our Lady’s message at Fatima was much broader than just a request for Russia’s consecration.

In addition to being a call to prayer, sacrifice, penance and reparation (i.e., that which has been exhorted by the Church in all ages), Our Lady’s message also contains certain elements that are uniquely suited to the specific dangers facing the Church and the world in our time.

This includes certain warnings and requests, the Consecration of Russia being but one of them; albeit one of great importance.

Speaking of the request for the Consecration (formally presented in 1929 as the will of God), Our Lord said to Sr. Lucia in August of 1931:

“They [an unnamed future pope in union with the bishops of the world] will do it, but it will be late. Russia will already have spread her errors throughout the world.”

At this, let’s take a brief timeout for a word from Captain Obvious:

We are living in the “late!”

And what are the errors of Russia?

Though they are manifold, one immediately thinks of atheistic Communism and all of its inglorious components. In short, we are speaking of an overthrow of the Christian social order; a form of messiansim that proposes to create a utopian ideal apart from God who, in the Person of Christ the King, reigns over all things.

[NOTE: We must also consider as a component of the “errors of Russia” the schism of 1054 whereby religious autonomy was asserted over and against the authority that rightly belongs to the Vicar of Christ alone.]

Indeed, it can be said that the errors of Russia have overtaken not only the world, but humanly speaking, the Church herself – in particular as made evident during the present Bergoglian occupation.

I would encourage anyone who may doubt the degree to which this is the case to carefully examine “the principles of atheistic Communism” as described by Pope Pius XI in the 1937 Encyclical, Divini Redemptoris, wherein the Holy Father went on to expound upon the Church’s role in combatting this evil.

“We wish also to indicate its [Communism’s] method of action and to contrast with its false principles the clear doctrine of the Church, in order to inculcate anew and with greater insistence the means by which the Christian civilization, the true civitas humana, can be saved from the satanic scourge, and not merely saved, but better developed for the well-being of human society.”

Indeed, it is the very mission of the Church to preach her doctrine concerning the Christian social order, in season and out, as she goes about “baptizing” the nations; that they may reflect in their very ordering everything whatsoever that Jesus taught.

As such, we might say that the Church’s response to the “errors of Russia” is well summed up in her doctrine concerning the Social Kingship of Our Lord Jesus Christ; the same having been articulated very beautifully by this same Holy Father in the 1925 Encyclical Quas Primas.

As I’ve written in the past, it only stands to reason that a Church that no longer takes the Kingship of Christ very seriously (as has been the case since Vatican Council II), also has little or no time for the requests issued by the Queen Mother at Fatima.

NB: The Holy Catholic Church, as Divini Redemptoris indicates, has ever been endowed with the means necessary to confront “the satanic scourge” known as Communism; with all of its constituent parts and rotten fruits so aptly described as the “errors of Russia.”

Be that as it most certainly is, God in His benevolence and wisdom, in order to promote devotion to the Immaculate Heart of Mary, has provided His Church with an “extraordinary” response to this evil, if you will; namely, the Consecration of Russia – the same, if only it had been done as requested, would have prevented the spread of her errors in the first place.

Again, we are living in the “late,” and the question we must ask, therefore, is simply this:

How is the Church called to respond to “the satanic scourge” now that it has most certainly spread?

Take a moment, dear reader, to answer this question for yourself before proceeding…

I would venture to say that many of you, in particular those who have a particular devotion to Our Lady of Fatima, answered almost immediately and very sincerely:

The only answer now is the Consecration of Russia!

If you answered thus, congratulations! This is the correct answer; unfortunately, however, to the wrong question…

Russia has been chosen by God in the manner well described by Fr. Nicholas Gruner who wrote:

“Russia, out of all the nations in the world, has been chosen to be specially blessed and set aside for the service of Our Lady. Russia is a vessel of election chosen by Heaven for our time, whether for mercy or for justice.”

At present, having ignored Heaven’s request, we are living through a chastisement brought about by God’s justice in a very real way. The fruits of Russia’s errors span the entire globe and are even embraced within the halls of power in the Church herself!

Again, we turn to Fr. Gruner:

“The sins of the world carry a great debt of punishment, which God’s justice will not overlook. This debt will either be exacted at the hands of Russia, the nation chosen by God to scourge the whole world for its sins, or it will be satisfied by the superabundant merits of the Immaculate Heart of Mary, again through the instrumentality of Russia.  But in this latter case, Our Lord will ensure that His Mother’s Immaculate Heart gets the credit for making that satisfaction. The conversion of Russia will be accomplished  only  through  its  Consecration  to  the  Immaculate  Heart  of  Mary…”

With this having been said, one might recognize that the answer, “Only the Consecration of Russia,” properly corresponds to such questions as:

How will the conversion of Russia take place? How is it that Russia will come to be an instrument of mercy? How will the Church and the world be spared the rotten fruits of her errors so prevalent in the world today? How will the period of peace promised by Our Lady come to be realized, etc.?

These questions are quite different than the one that I had asked previously; a question that we may rephrase as follows:

What are we to do as we await the Consecration of Russia to the Immaculate Heart of Mary?

Please, stick with me here… I realize that this exercise is a bit laborious, but we are zeroing in on a matter about which many sincere persons seem genuinely confused.

We know that the Consecration “will happen.” Our Lord said so. What we do not know, however, is when it will happen.

We also know that until such time as the Consecration is done, many souls will be lost due to the “great apostasy in the Church [that] will begin at the top as predicted,” according to Cardinal Mario Luigi Ciappi, “in the Third Secret of Fatima” – the text of which was to be read in 1960 in order to preempt “a bad council and a bad Mass.”

Among so-called “Fatimists,” there is no disagreement: We are living through a manifestation of that “great apostasy” at this very moment.

Let us be equally as certain that those who do not recognize as much; i.e., the “conservative Catholics” (both lay and ordained) that my interlocutor hopes not to alienate any further, are the very souls most at risk as a result – not, properly speaking, because they aren’t invested in the message of Fatima, but because having accepted the conciliar imposter, its new rite and its new “saints,” they do not know the Faith.

My friends, we must ever remain focused on our duty to labor for the salvation of souls. This is the very mission of the Church to which each of us is obligated to contribute according to our station in life.

As such, our primary Christian duty (beyond our own sanctification) is not to recruit as many persons as possible to the message of Fatima; even less so is it to garner signatures on a petition seeking the Consecration of Russia.

Sure, there is a place for these things, and those who know the message of Fatima have a duty to promote it.

And yet, we must not lose sight of that which takes precedence even over this – the number one priority of the Church and her children in every age – namely, to borrow from the words of Pope Pius XI:

To contrast the satanic scourge – the false principles that lead souls to perdition – with the clear doctrine of the Church; denouncing the former while insisting upon and defending the latter regardless of personal cost.

This is the answer to the question:

What are we to do as we await the Consecration of Russia to the Immaculate Heart of Mary?

As I’ve stated before in this space, doing so is rather simple; we need only applaud that which is good and true, while at one and the same time condemning that which is dangerous and false. We can and we must do both.

This means that we can never justify ceasing – even if only for a time – to warn against the danger posed by those who might seduce others into embracing the Second Vatican Council, the New Mass, the New Evangelization, the pontificate of “Saint” John Paul II, etc. – no matter who they may be.

It is especially foolish to believe that doing so in some way honors Our Lady as these are the very evils that she came to preempt at Fatima; that her children not be deprived of any of the graces that her Son wishes to provide unto salvation.

In conclusion, while I wrote this article for the benefit of all readers, I especially hope that those who have been generously blessed by God with a voice in so-called “traditional Catholic” media will likewise take heed and carry out their duties accordingly.