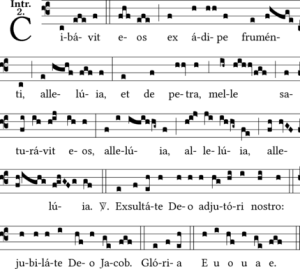 {With my priestly blessing to the readers, +Father José Miguel}

What with the postconciliar crisis in the Church going full steam ahead, with blasphemy, heresy, and apostasy being propagated unashamedly and practically unhindered at all levels (but for brave traditionalist {aka Catholic} bloggers here and there)—and all indications are that things are going to get much worse before they get any better—from time to time it’s good to take a breather and cherish what the Holy Catholic Church really is… and what it sounds like when she, the Spouse of Christ, prays to her Lord and God.

Thought to share with the kind readers of akaCatholic this rather magnificent Antiphon taken from Psalm 80, in Gregorian Chant, beautifully sung by a boys’ choir, accompanied by the gentle chords of the organist, in honor of the Most Blessed Sacrament, for the Feast of Corpus Christi, the Mystery of Faith:

He fed them from the fat of the wheat, Alleluia,
And filled them with honey out of the rock, Alleluia.
Rejoice in God our help,
Be joyful in the God of Jacob.
Glory to the Father and to the Son and to the Holy Spirit,
As it was in the beginning and now and forever,
And unto ages of ages. Amen.

Is Chris Ferrara sliding into conservatism?

Saint Peter and His Successor