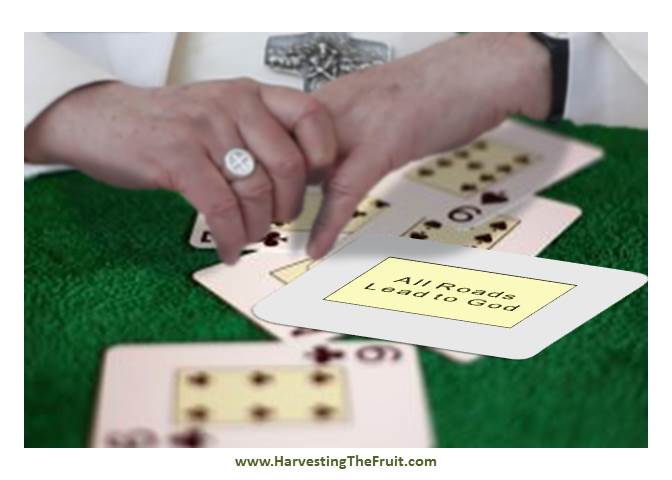 Several months ago, I wrote in reaction to the now infamous Scalfari interview,”We have entered a new phase in the post-conciliar destruction of the Church. The days of pretense and nuance are over.”

Well, I hate to say “I told you so,” but Evangelii Gaudium offers any number of gems that serve to confirm precisely this.

If it’s at all possible to sum up the general theme of this 50,000 word tome in just a couple of sentences, Pope Francis himself seems to have done so back on August 7th when he said (as reported by CNS):

You see, at the very heart of Pope Francis’ vision for the Church lies an impoverished notion of her mission, one that reflects no desire whatsoever to seek converts to the Holy Catholic faith, be it among the heathens, the heretics or the Jews.

Now, let’s not pretend that his immediate predecessors were any different; they weren’t, but Francis does appear to be blazing new trails as it relates to the candor with which he makes the case for abandoning the mission of the Church as Our Blessed Lord gave it.

Non-Christians, by God’s gracious initiative, when they are faithful to their own consciences, can live “justified by the grace of God”, and thus be “associated to the paschal mystery of Jesus Christ”. But due to the sacramental dimension of sanctifying grace, God’s working in them tends to produce signs and rites, sacred expressions which in turn bring others to a communitarian experience of journeying towards God. While these lack the meaning and efficacy of the sacraments instituted by Christ, they can be channels which the Holy Spirit raises up in order to liberate non-Christians from atheistic immanentism or from purely individual religious experiences. (EG 254)

Think about what we’re being told…

The invincibly ignorant non-Christian, moved by grace to seek God and yet embracing a false religion just the same, tends to engage in pagan rituals that serve to create a community of pagans. So far so good, but notice exactly who, at least insofar as the pope believes, “raises up” these so-called “sacred expressions,” it’s the Holy Spirit!

If that’s not troubling enough, we are told that this urge to engage in pagan rites is “due to the sacramental dimension of sanctifying grace.” Sanctifying grace!

While Pope Francis’ post-conciliar predecessors were content to behave as if all roads lead to God, Baptism or not, this pope is willing to put his cards face-up on the table: There is no urgency to Baptize non-Christians for the simple reason that sanctifying grace is already operative in their lives!

This explains a lot, doesn’t it?

This is why the pope feels justified in calling religious diversity “a gift”  and can write about a “healthy religious pluralism” (cf EG 255).

As he sees it, from the earth worshipers to the humanists and everyone in between, the whole kit and kabodle is nothing less than the Holy Spirit moving the whole of mankind toward God; a process that takes place quite apart from the participation of modern day churchmen whose primary concern is social justice; having long since outgrown the Great Commission.

And this is the man chosen by the College of Cardinals to “reform the Roman Curia,” or to borrow an ominous phrase from Evangelii Gaudium, to “open us up to the future, lest we cling to a nostalgia for structures and customs which are no longer life-giving in today’s world” (EV 108).