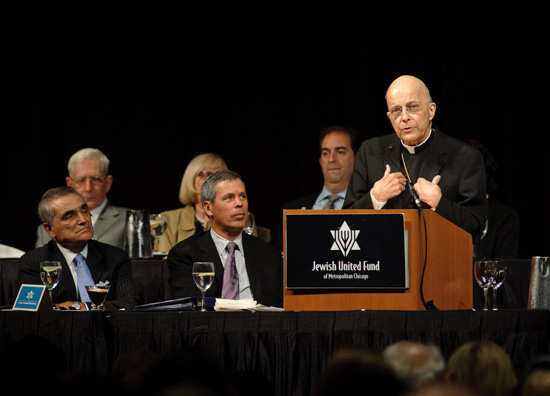 With the appointment of Blasé Cupich to the Archdiocese of Chicago, so-called “conservatives” are lamenting the departure of Cardinal Francis George as if he’s a modern day St. Augustine.

At a recent speech to the Jewish Federation of Metropolitan Chicago, Cardinal George revealed himself to be just another blathering Judas in red, not entirely unlike the pandering paliaccio in New York, who also enjoys basking in the fleeting earthly rewards that come from forming chummy relationships with Our Blessed Lord’s enemies.

Throughout his speech (excerpted below), Cardinal George dutifully played the role of the contrite little goy, no doubt to the utter delight of his audience.

Those with eyes to see, however, cannot but be disgusted by the realization that Cardinal George is as much a part of the present day crisis in the Church as his successor.

… I’m going to make reference to a document that some of you have heard of and, perhaps, some have not.  In Latin, its official title is Nostra Aetate.  Sometimes people outside the Church don’t understand what is stable and what is policies.  A document from an ecumenical council is not just a statement of policies, it’s not even midrash.  It is perhaps closer to Torah.

Torah, for those who do not know, refers to the first five books of the Old Testament; it’s Sacred Scripture, the divinely inspired Word of God. This is what Cardinal George considers an apt comparison to the decrees of Vatican II!

As such, he explains:

It is something that we have to make reference to not only when it is published but for generations to come. It is a constant part now of a rather small book that contains the decrees of ecumenical councils from the fourth century up to the present time.  Those aren’t reformable – they can be interpreted – but they are always there as a constant point of reference.

This is unadulterated hogwash. The text of Vatican II cannot be lumped together with the decrees of the other ecumenical councils, like Nicaea, Constantinople and Trent, as if to suggest that all are of equal, or even similar, weight.

The idea is so entirely ludicrous as to effectively discount everything that follows, but let’s continue just the same…

So it’s not a question of examining a policy statement that can be reversed.  Nostra Aetate can’t change as a point of reference.

OK, so let me get this straight…

Nostra Aetate could change that which predated it (as the cardinal will explain in a moment), but this particular text from a council that produced exactly zero binding statements and de fide definitions is the irreplaceable be-all-end-all position paper to which all are bound in perpetuity, and this in spite of the fact that the document makes no such lofty claim for itself.

Further tickling the assembly’s itchy ears with what amounts to a mea culpa for the Church’s sinful past, the cardinal continues:

I say that because sometimes people remain uneasy:  “We’re fine right now.  What happens in the future?  Will the Catholic Church change back to its being a carrier of anti-Semitism as it has been in some places over many years?”  Should that happen, then it will happen in some group that is no longer living within the terms of Catholic identity as it has been defined for us by Vatican II.

Cardinal George is essentially saying that Jewish allegations of an institutionalized Catholic anti-Semitism are accurate! The man is either an ignoramus, a liar, or some miserable combination of both.

And what exactly are the “terms of Catholic identity” to which he refers?

They are the terms of the Apostolic cease fire set in motion at Vatican II wherein the Jews are no longer called to conversion. (Neither is anyone else, for that matter.)

While much of the work of the Council was aimed, therefore, at the renewal of the inner life of the Church: “Who are we?” – other aspects, equally important, involved turning the Church toward an engagement with the world in both mission and service.  Who are we vis.-a-vis. others?  We don’t know who we are as Catholics unless, in some fashion, we talk to everybody else.

I smell a load of Argentinian horse dung. He sounds remarkably like another Francis, does he not?

How pathetic. Here’s a supposed “Prince of the Church” effectively whimpering in self-doubt like a pimple faced college kid about to go backpacking through Europe on a journey to find himself.

I have a radical idea for Cardinal George…

Imagine a Church confident in her self-identity as the Mystical Body of Christ; a confidence reinforced every time she ponders her Founder and her Head (remember Him?) and sets about carrying out her divinely given mission to invite “everybody else” to embrace Him and the salvation that He alone offers.

Or would that be considered just a bit too “triumphalistic” under the current regime?

This way of seeing the world [at the Council] through these circles of dialogue provided a basis for the Fathers when they went on to express the religious significance of the Catholic Church’s relationship to the Jewish people. You have to understand that, from the beginning of the time of modernity and even a little before that, the stance of the Church vis.-a-vis. Others was much more defensive.  It wasn’t dialogical.  It was a stance generated by fears from the French Revolution and other movements that were obviously anti-Catholic and had resulted in persecution.  This defensive reaction to the development of atheistic modernity had to be broken down.

To hear Cardinal George speak one would imagine that the Church never pronounced a single anathema prior to 1789 when it got all defensive up in here.

This garbage might sell well in room full of Jews looking for confirmation that the Catholic Church no longer imagines herself to be the voice of Him who said, “He who rejects me, rejects Him who sent me,” but no one with even a shred of sensus Catholicus is buying it.

The movement from defensiveness to dialogue was the purpose of the Council.  Of particular importance was dialogue with the Jewish people, because that is a unique relationship.  It always will be unique even though we ourselves haven’t totally determined it because we haven’t talked enough, even, perhaps, to one another.

We haven’t talked enough? He can’t be serious.

In any event, apart from his choice of words, Cardinal George is right about one thing: The Council did indeed have as its purpose the creation of a newchurch that would cease speaking in the name of Christ who calls all men to conversion. As a result, spineless churchmen of today, like himself, are content to chat it up with heathens, heretics and Jews in the language of humanism.

One of the elements of Nostra Aetate is its intentional focus on remembering.  When applied to the Jewish people, Catholics are called upon to remember the anti-Judaism which was often customary among Christians throughout history, to remember anti-Semitism as a racist philosophy, and, of course, most profoundly, to return to the Shoah itself, which must never be forgotten.

Oh, yes, one must ever remember the Shoah, especially when pandering to a gathering of people whose common identity revolves around but one non-negotiable article of faith that must be embraced by all who call themselves “Jewish;” a belief not in God, but in the Holocaust.

Funny how the call to “remember” never seems to include the cries of the Jewish people for the death of their Messiah as recorded in Sacred Scripture. This, we must forget.

Nostra Aetate also extends the notion of remembering in another direction, calling on Catholics to remember the spiritual bonds which unite Jews and Christians.   That remains the basis of our ongoing conversation, ensuring that neither party co-opts the other.

Exactly what “spiritual bonds” is Cardinal George talking about?

The overwhelming majority of self-identified Jews in this country, and no doubt in that very room, have exactly no spiritual patrimony with authentic Judaism much less the Holy Catholic Church.

In addition to plainly rejecting Christ (oh, yea, there’s that insignificant detail…) most modern day Jews have effectively renounced the faith of Abraham, Isaac and Jacob as evidenced by their overwhelming support for abortion-on-demand, LGBT activism and earth worship.

As for the Jewish Federation of Metropolitan Chicago itself, with its nearly $1.5 billion in assets, this is a group that leverages its considerable influence in such laudable ways as joining Planned Parenthood as cosignatories to an ACLU appeal to the U.S. Senate to block increased funding for abstinence-only-until-marriage programs.

And yet, Cardinal George continues:

Speak for yourself, Eminence.

Respect and rejoice in what, the perfidy of a people whose most noteworthy distinguishing characteristic is their rejection of Christ?

This is what passes for a champion for the Faith in the eyes of most “conservative” Catholics.

A second phase involved rethinking the relationship of Jews and Christians in the light of renewed biblical studies …  Biblical scholarship has helped us to understand more clearly that the first century of the Common Era was more complex than either Jewish or Christian writers of that age usually admit.

Isn’t that cute how Cardinal George so politely refers to the Year of Our Lord, Anno Domini, as the “common era” so as not to offend the sensibilities of his esteemed hosts?

Cardinal George then gets to the punchline:

Rather than the simplistic framework which saw Christianity replacing Judaism, the historical fact was that Rabbinic Judaism was already evolving, so that when the destruction of the Temple occurred in 70 C.E., Rabbinic Judaism became the form of Judaism for the new millennia and the form that we live with now and what we understand as Judaism.

Allow me to give a Catholic understanding of what Cardinal George is talking about.

Rabbinic Judaism, before Christ, grew out of the faithlessness of those stiff necked people who found themselves, as a matter of justice, in exile; removed from the Holy Land and the Temple of sacrifice that was entirely central to their covenant relationship with God.

Today, rabbinic Judaism continues to be nothing more than a dead monument attesting to the infidelity of these same people who are as yet in an infinitely greater exile; this one born of their rejection of Christ and hence of the God of Abraham, Isaac and Jacob.

The bottom line is that rabbinic Judaism never was, and never will be, God’s will for His people; it is a manmade twist on what was once the one true faith but is no more.

The only “form of Judaism for the new millennia” ordained by God is the Holy Catholic faith, the same that the likes of Cardinal Francis George haven’t the wherewithal to preach.

Is it any wonder that a parish in the Archdiocese of Chicago, Holy Family in Inverness, recently made news by covering every image of Christ therein so Jews could use the facility for their High Holy Day liturgies?

So long, Eminence. May you be granted the grace to repent of your denial of Christ before it’s too late.

Summorum Pontificum under attack: How soon we forget