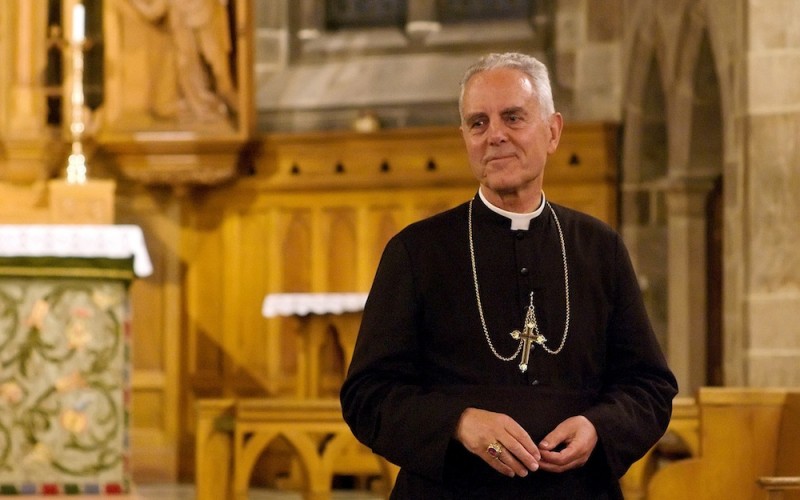 “The Archbishop [Lefebvre] died, twenty-five years ago. Have his successors followed faithfully?”

To which he immediately provided the answer, “No.”

Bishop Williamson went on to say of the “Archbishop’s successors,” meaning Bishop Bernard Fellay and those priests and bishops of the Society who haven’t joined ranks with the mutineers of the so-called “resistance”:

While they were going down to Rome in pursuit of some political agreement, by which, as became clear at the latest in the spring of 2012, they were ready to compromise doctrine, on the contrary the Archbishop only ever went down to Rome for the good of the Faith and the Church.

This raises some important questions:

– How exactly did it “become clear” to him that Bishop Fellay was “ready to compromise doctrine”?

– What “doctrines” in particular was he supposedly prepared to compromise?

– Most importantly, what objective evidence does Bishop Williamson have to support such gravely serious allegations?

These, my friends, are not just rhetorical questions.

Justice demands that Bishop Fellay’s accusers meet them with concrete answers; apart from which, we will have no choice but to conclude that Bishop Williamson, and those who repeat his allegations, are guilty of calumny.

As it is, there can be little doubt that if Archbishop Lefebvre was alive today to witness this sad spectacle he would most certainly reprimand Bishop Williamson for overstepping his bounds.

Even as the Society’s namesake, Pope St. Pius X, severely condemned the modernists for their duplicity and wickedness in Pascendi, even he saw fit to “leave out of consideration the internal disposition of soul of which God alone is the judge.”

Bishop Williamson, by contrast, boldly presumes to have so much insight into the internal disposition of others’ souls that he has no problem accusing Bishop Fellay of being motivated by something other than “the good of the Faith and the Church.”

Look, it’s one thing to find cause for disagreement concerning matters of prudential judgment; it’s quite another to question Bishop Fellay’s motives and his commitment to the good of the Faith. There may be room for one to engage in the former; the latter, however, is just plain sinful.

As if Bishop Williamson hadn’t given us enough reason to question his reliability in the matter, he continued:

False ‘obedience,’ preferring Authority to Truth, now crept back at the top of the Society from which the Archbishop had exorcised it, and within a few more years his Society was hardly recognisable as its misleaders went to Rome, cap in hand, begging for official recognition from the Church Authorities

Even the Kool-Aid drinkers among the “resistance” have to recognize this as hype.

If the Society is “hardly recognizable” today as compared to years past it is only in the degree to which it has grown. Its commitment “to all that has been believed and practiced in the faith, morals, liturgy” (cf Archbishop Lefebvre’s 1974 Declaration) remains unchanged; with every indication being that it is alive and well in its conferences, chapels and schools.

As for the idea that Bishop Fellay went running to Rome with cap in hand, if this was truly the case, then where is the official recognition that he supposedly begged of the Church Authorities?

The truth of the matter is that the primary instigator of the 2012 doctrinal discussions was none other than Benedict XVI, and they failed to result in any “official recognition” of the SSPX for the simple reason that Bishop Fellay was not then, and is not now, “ready to compromise doctrine.”

If Bishop Williamson’s accusations were true, including the contention that the Society’s leadership “prefers Authority to Truth,” then they would enjoy some regular canonical standing this very day. The reason they don’t is obvious – they refuse to abandon the true faith.

So, what is my dog in this fight?

To be very clear, it’s not that I’m on “team SSPX” or “team Fellay.” I’m on “team Catholic.” It just so happens that the Society of St. Pius X, under the leadership of Bishop Bernard Fellay, is on the same team. That’s it.

That said, if a day should ever come when it becomes objectively clear that the Society is compromising doctrine, or putting false obedience above Truth, then rest assured that I will spare no effort in condemning their errors.

If you, dear reader, happen to be among the “resisters” and have any doubts about that, try me by producing something more substantial than blind conjecture.

In the meantime, as it concerns Bishop Williamson and the so-called “resistance” one has to wonder, resistant to what?

All indications are that these persons are at war with nothing more than their own suspicions; at least, that’s where it seems to begin. Sadly, and as these latest Eleison Comments of Bishop Williamson indicate, they end up at war with the truth, perhaps even unknowingly; treating supposition as reality, engaging in calumnies, and sowing the seeds of sin and division.