Home
Blog Post
Bishop Morlino: “Have nothing to do with SSPX” 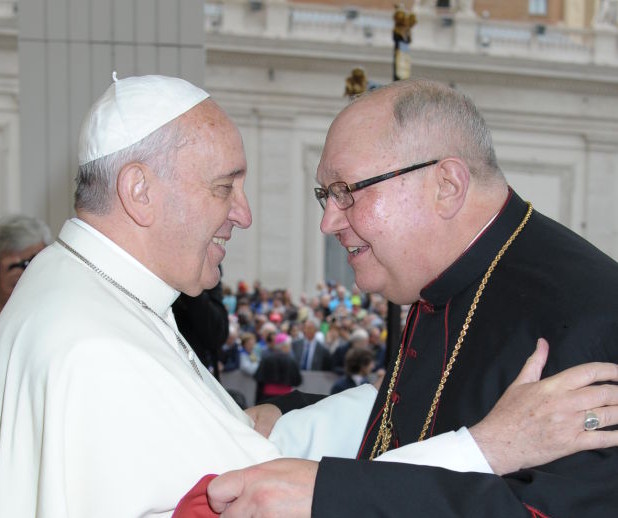 Writing in his diocesan newspaper and prompted by God only knows what, Bishop Robert Morlino of the Diocese of Madison issued, “A word of caution about the Society of Saint Pius X.”

I will provide commentary on key excerpts, but please follow the link to read it in full.

The 50 years since the close of the Second Vatican Council have been tumultuous for the Church. Forces both inside and outside of the Church tried to distort and exploit the council and the post-conciliar liturgical reforms to create a new Church after their own image.

A new Church after their own image…

In other words, a Church that bears little resemblance to the Holy Catholic Church.

Indeed, this is true enough, but what Bishop Morlino leaves unsaid is that among those who have so exploited the Council (not only liturgically, but otherwise as well) is every pope who has reigned ever since; a point that will prove noteworthy later.

Making his way to the SSPX, Bishop Morlino continues:

Most of the faithful Catholics who saw this happening fought hard for a “reform of the reform.” Sadly, others decided that the only way forward was to work outside of — and sometimes against — the hierarchical Church and its structures. This was the choice made by the Society of Saint Pius X (SSPX), a worldwide society of priests best known for its strong opposition to the post-conciliar reform of the Mass…

At this, two points must be made.

Number one, the decision “to work outside of the hierarchical Church” to which Bishop Morlino inadequately refers concerns the episcopal consecrations of 1988, the resulting excommunications of which have been lifted.

In other words, this matter is, in a sense, a non-issue save for the grave injustice of withholding formal jurisdiction from a priestly Society that is not excommunicated, not heretical, and of which he himself says, “it would be inaccurate to call it a schismatic group.”

The question that remains (and which Bishop Morlino dares not even attempt to answer) is this: Of exactly what crime is the SSPX guilty such that jurisdiction continues to be withheld?

I shall never tire of providing the answer until such time as this injustice is rectified:

The SSPX refuses to sign off on the proposition that “Vatican Council II is an integral part of the Tradition of the Church,” (the price of admission for so-called “full communion” set by Benedict XVI) for the simple reason that it most certainly is not.

This is the elephant in the room that Bishop Morlino, who enjoys Golden Boy status in the eyes of many marginally tradition-minded conservatives, must tiptoe around in order to preserve his own membership in the “full communion” club.

Secondly, while it may well be the case that the SSPX is “best known” by many “for its strong opposition to the post-conciliar reform of the Mass,” this is a gross mischaracterization of the actual situation.

The reality is far more complex, especially given the “liberation” of the (never abrogated) traditional rite in Summorum Pontificum.

In reality, the Society’s “opposition” also concerns the Council’s treatments of ecumenism, religious liberty, collegiality, and the relationship of the Church to non-Catholics.

“I want to be cautious and fair about the SSPX,” Bishop Morlino continued.

Well, I have some bad news for you, Excellency, even at this early point in your missive you have failed.

Many of their [SSPX] concerns are legitimate. Many of their values and aspirations are admirable, and their zeal is impressive. Their priests wish to serve the Lord and His people. The people who attend their chapels are fervent. We should always be cordial, respectful, and welcoming to them as brothers and sisters in Christ. Yet, their relationship with the Church is complex and developing … Having said that, all is not well with the SSPX, and my advice, my plea to the traditionally-minded faithful of the diocese is to have nothing to do with them.

If indeed the Society’s relationship with the Church is complex (and it is, as I stated above), why does the bishop insist on treating it as if it is not?

It’s perplexing given that Bishop Morlino plainly acknowledges that many of the Society’s concerns are legitimate.

If this is what he sincerely believes, then he must also believe that those faithful in his care who share their concerns have legitimate motivation for being attracted to, and joining, the SSPX.

This being the case, his issuance of a generalized “word of caution” to “have nothing to do with” the Society, while deliberately avoiding the “legitimate” concerns shared specifically by those to whom he writes, is highly irresponsible, weak, and unbefitting a true father.

From here, Bishop Morlino plays the “jurisdiction” card as if it somehow magically trumps each and every one of the Society’s legitimate, and mysteriously unnamed, concerns:

The priests of the SSPX are validly ordained priests, but because for the most part they were ordained illicitly (i.e., by a bishop who had no jurisdiction over them and no permission to ordain), they are suspended ipso facto from the moment of their ordination (c. 1383); that is to say, even though they are ordained, they have no permission from the Church, which is necessary, to exercise priestly ministry.

This argument is less-than-sufficient and apparently the bishop knows it.

Of the SSPX priests, he makes it a point of saying that “for the most part they were ordained illicitly,” and he does so because he knows very well that among their ranks are men who joined them after they were ordained by bishops like himself. (In fact, it would come as no surprise if he personally ordained one or more of them.)

Moving on, Bishop Morlino ultimately gets to the heart of his plea:

If you take nothing else away from this letter, at least hear this — the SSPX’s marriages and absolutions are invalid because their priests lack the necessary faculties … do you want to take that kind of a risk with your marriage or even with your soul?

I hear ya, Excellency, and frankly, I am embarrassed for you. Is this really the best you can do as a spiritual father; to tell the members of your flock to hedge their bets?

Apparently, Bishop Morlino understands that the Society’s position does not truly lend itself to being dismissed out of hand; meriting at least superficial mention, saying:

The SSPX argues for the validity of their marriages and absolutions based on the canonical principle that the Church supplies the faculty in cases of doubt or common error. In certain rare and exceptional cases that might apply to their situation, especially with regard to confession, but for the most part their arguments are not persuasive.

He then very quickly absolves himself of the duty to actually address the concerns of his flock, the same that he acknowledges as being legitimate, by declaring:

This is the stuff of neo-conservative stardom, folks. It’s like declaring a heartfelt desire to plant a garden while refusing to pick up a shovel.

As Bishop Morlino continues, it becomes rather clear (to those with eyes to see, at any rate) why he is unwilling to address those concerns directly; namely, he has nothing of substance to offer in response:

Part of their [SSPX] argument hinges on the faithful erroneously believing that the SSPX priests have the requisite faculty; well, if you were in error about that up until now, you are not in error anymore.

And why does the bishop think that this belief is erroneous (have a seat lest you fall down laughing):

The SSPX also makes the argument that they have permission because the Church is in a state of “emergency.” However, 1) the Legislator (the Pope) and the bishops with him don’t think there is a state of emergency, and 2) the sacraments offered by the SSPX are already widely available at legitimate parishes and chapels, i.e., no one is being denied the sacraments.

Yes, he really wrote this, so let’s humor him by looking at his… ahem… insights… a bit more closely.

1) Pope Francis the Disastrous and the likes of Cardinals Kasper, Maradiaga and Marx don’t think there’s an emergency in a Church the majority of members of which have little time for Holy Mass and support gay marriages, abortions, and adultery.

2) The sacraments are available in the very same parishes where the above mentioned apostates lost their faith.

Bishop Morlino should have stuck with his “This is not the place…” declaration and left it at that. At least then his flock would have been left wondering if their bishop can be taken seriously; now they know he cannot.

Toward the end of his grossly inadequate “word of caution,” Bishop Morlino offered the only real gem to be found in the entire thing.

While speaking of frequent attendance at SSPX liturgies, he unwittingly provided an outstanding argument for avoiding the Novus Ordo Missae:

But as you attend more and more, it ceases to become something you tolerate and starts to become a mark of identity, even a badge of pride. You adopt a fixed posture of separation from the Church. That is a perilous position for any soul to be in.

Thank you, Excellency. I’ll keep this last point well in mind if ever I find myself tempted to visit one of those legitimate parishes or chapels of which you speak.

If you think interreligious ‘dialogue’ is a joke…