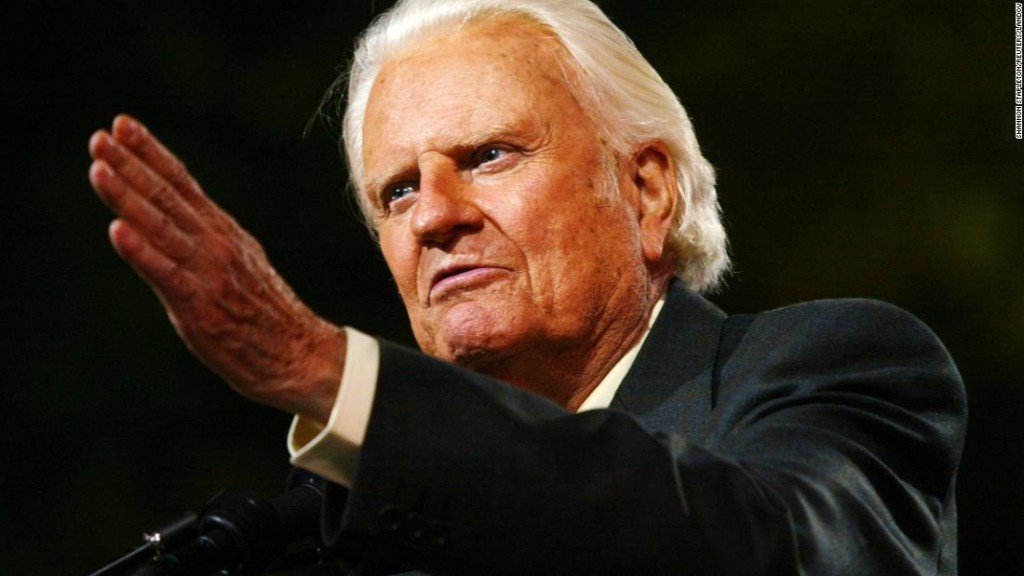 Famous American “evangelist” Billy Graham has died. Let us pray for him, confident that Our Lord will render perfect justice unto this man who enriched himself by preaching a false gospel; one that encouraged countless souls to die as he did without the aid of the sacraments, outside the one true Church of Christ.

Though I’ve not yet read any statements from members of the hierarchy commenting on Graham’s death, I am certain that many of them will amount to a call to commence his cause for canonization.

This is precisely what happened when another so-called “evangelist,” Robert Schuller of Crystal Cathedral fame, died in 2015.

Readers may recall that Bishop Vann of the Diocese of Orange, where the deceased heretic ran his Christo-business, issued a statement saying:

Schuller showed the light of Christ to people all over the world [via] his inspiration to so many in his preaching of the Word of God … giving of his entire self to the mission of Christ in the world.

Seriously, folks, would anyone really be surprised if a formal cause for the canonization of Billy Graham is actually undertaken? 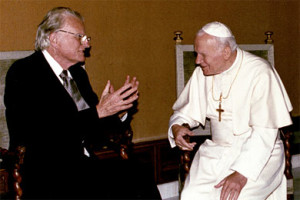 In fact, it wouldn’t surprise me one iota if the man is eventually raised to the altars; that is, in the same manner as men like Karol Wojtyla.

If we’re honest, we have to admit that according to the new and improved process for canonization – which renders “sainthood” little more than a Lifetime Achievement Award in Service to the Conciliar Revolution – Graham is no less deserving than John Paul II.

I think that everybody that loves or knows Christ, whether they are conscious of it or not, they are members of the body of Christ… [God] is calling people out of the world for his name, whether they come from the Muslim world, or the Buddhist world or the non-believing world, they are members of the Body of Christ because they have been called by God. They may not know the name of Jesus but they know in their hearts that they need something they do not have, and they turn to the only light they have, and I think that they are saved and they are going to be with us in heaven. – Billy Graham (cf Interview with Robert Schuller, Evangelicalism Divided (2000), pp. 73–74)

This man is the way for the Church-a way that, in a sense, is the basis of all the other ways that the Church must walk – because man – every man without any exception whatever – has been redeemed by Christ, and because with man – with each man without any exception whatever – Christ is in a way united, even when man is unaware of it: Christ, who died and was raised up for all, provides man – each man and every man – with the light and the strength to measure up to his supreme calling.  – John Paul II (Redemptor Hominis 14)

In these quotes, we find summarized in just a few sentences one and the same false gospel; the perversion of the “good news” that both Wojtyla and Graham preached to the nations throughout their “evangelical” careers.

With this in mind, I invite neo-conservative, JPII Catholics, to repeat after me in light of Graham’s passing, Santo Subito!

I would be delighted to see Billy Graham “canonized,” not because I delight in seeing God mocked, but because such would presumably awaken some of those who are pleased to call John Paul II “saint,” opening their eyes to the true extent of the present crisis.

On the abdication of Benedict XVI