Home
Blog Post
Bergoglio’s Call to Prayer: Will you participate? 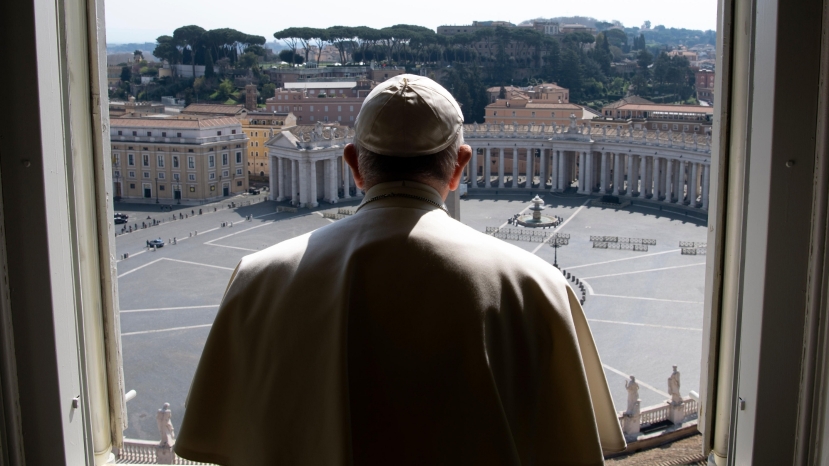 During his Angelus address this past Sunday, Jorge Bergoglio (stage name, Francis) announced:

In these trying days, while humanity trembles due to the threat of the pandemic, I would like to propose to all Christians that together we lift our voices towards Heaven. I invite all the Heads of the Churches and the leaders of every Christian community, together with all Christian of the various confessions, to invoke the Almighty, the omnipotent God, to recite at the same time the prayer that Jesus, our Lord, taught us. I, therefore, invite everyone to do this several times a day, but all together, to recite the Our Father this coming Wednesday, 25 March, at noon, all together.

He went on to issue a similar call to unite in prayer, this event scheduled to take place two days later:

With this same intention, this coming Friday, 27 March, at 6:00 pm, I will preside over a moment of prayer on the sagrata of Saint Peter’s Basilica, before the empty square. I invite everyone to participate spiritually through the means of communication. We will listen to the Word of God, we will lift up our supplication, we will adore the Blessed Sacrament, with which at the end, I will give the Urbi et Orbi blessing, to which will be connected the possibility of receiving the plenary indulgence.

“To the pandemic caused by the virus,” Jorge continued, “we want to respond with the universality of prayer, of compassion, of tenderness.”

So, are you thinking of accepting Bergoglio’s invitation to join in his global initiative and inviting others to do the same?

Before you answer, consider the following:

What Jorge is proposing is, at best, an ecumenical affair, one that is designed to include the prayers of “all of the various confessions” of self-identified “Christians.”

Big deal? You bet it is.

This means that it will be an amalgam of prayers, some directed to the one true God, commingled with prayers that most certainly will not “invoke the Almighty;” rather, they will be directed to various false gods; e.g., the Methodist false god who has blessed the world with abortion clinics, the Presbyterian false god that approves of homosexual sex pacts, the false god that most of the heretics share whose only begotten Son was born of a sinner, etc.

And then there is the most dangerous fake deity to be invoked among them all; namely, the Bergoglian false god, the “God of Surprises,” the unjust god whose law is too difficult for some persons to keep, the lying god who wills even those religions that explicitly reject Jesus Christ, the fickle god who wills at times that we should break the sixth commandment.

This is what the “universality of prayer” that Jorge has in mind looks like, folks. He didn’t invent the idea. We saw this same brand of apostasy in action at the Assisi abominations, wherein it was supposed that all “prayer,” regardless of to whom it is directed, is fruitful. As such, we might even think of Bergoglio’s event as Assisi IV. Sure, no invitation to join in (yet) has been extended to Jews, Muslims, Buddhists, etc., but it just as well could have been.

Lastly, all of the prayers to all of the false gods mentioned are intended to implore God to come to our aid in the midst of the Coronavirus, a malady that Jorge Bergoglio suggests may be Mother Earth’s way of “reckoning with us … so that we will take care of nature.”

Now, with all of that having been said, I’ll ask again:

Are you thinking of joining Jorge in his global initiative and inviting others to do the same?