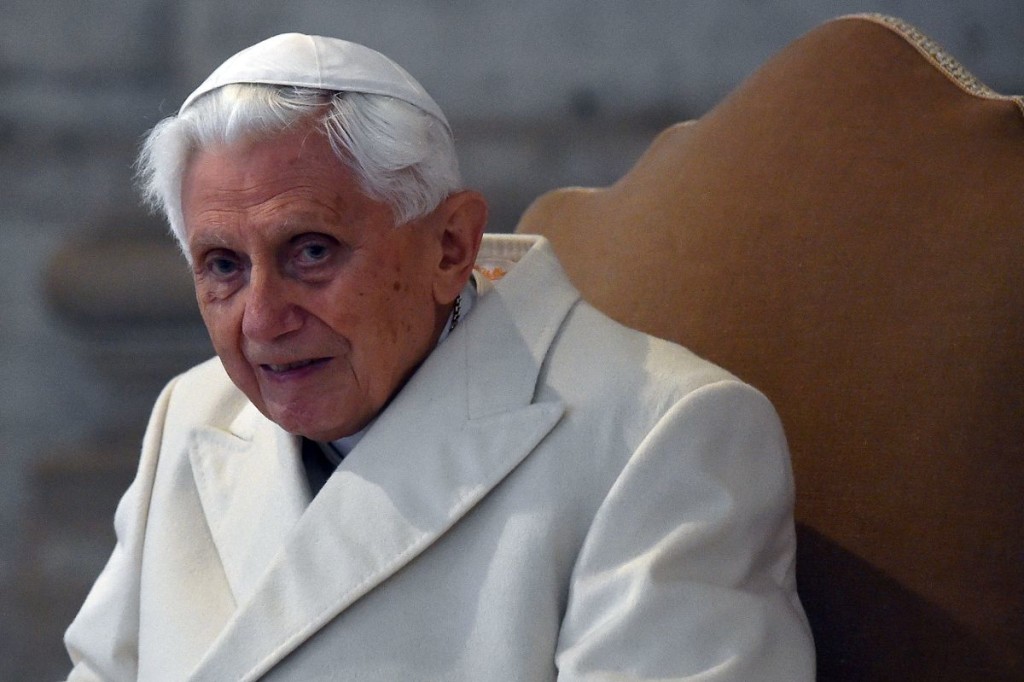 Benedict XVI, who some believe enjoys the non-existent ecclesial rank of “Pope Emeritus,” has issued an essay on the Church’s homo-clerical crisis.

Written in a fashion typical of clerics who have not a Catholic compass, the text is rather lengthy; weighing in at over 6,000 words. It is linked above. Feel free to suffer through it in its entirety if you wish; it is, after all, Lent.

Here we will take a closer look at one especially noteworthy portion of the text that, in my reading, has been overlooked by others. We may (or may not) examine other parts of the text in a separate post.

Benedict informs readers “that in the 1960s an egregious event occurred, on a scale unprecedented in history.”

An egregious, unprecedented event indeed! If you’re expecting him to identify it correctly, however, forget about it. He continued:

It could be said that in the 20 years from 1960 to 1980, the previously normative standards regarding sexuality collapsed entirely, and a new normalcy arose that has by now been the subject of laborious attempts at disruption … Among the freedoms that the Revolution of 1968 sought to fight for was this all-out sexual freedom, one which no longer conceded any norms.

It is true enough that the broader culture underwent a substantial moral collapse in the decades noted, however, Benedict writes as if sexual immorality was invented in the 1960s and somehow took the Church by surprise. One need only consider the culture of the ancient Romans and Corinthians and St. Paul’s Epistles to each, however, to see that the Church, even from the earliest days, has been faced with such things, and what’s more, she admirably rose to the duty of addressing them.

At the same time, independently of this development, Catholic moral theology suffered a collapse that rendered the Church defenseless against these changes in society.

Independently of this? Hardly. Consider by contrast the words of Pope Pius XII:

For Christ alone is the “Corner Stone” on which man and society can find stability and salvation. On this Corner Stone the Church is built, and hence against her the adversary can never prevail: “The gates of hell shall not prevail”, nor can they ever weaken her! Nay, rather, internal and external struggles tend to augment the force and multiply the laurels of her glorious victories. On the other hand, any other building which has not been founded solidly on the teaching of Christ rests on shifting sands and is destined to perish miserably (SummiPontificatus, nos.103-105).

A number of things may be taken from these verses: One, the stability of society is very much dependent upon the activities and influence of the Catholic Church; not vice versa. Built as she is upon Christ the Corner Stone, the Church alone provides the sure foundation necessary for the construction of a just and moral society.

More importantly, note very well the Holy Father’s firm conviction that neither external nor internal struggles can ever weaken the Church’s forces. In fact, he insists that as such struggles may increase, all the more will the Church emerge strengthened in her ability to prevail.

How can he say this? Simple:

Now the law entered in, that sin might abound. And where sin abounded, grace did more abound. That as sin hath reigned to death; so also grace might reign by justice unto life everlasting, through Jesus Christ our Lord. (Romans 5:20-21)

And how does Christ reign even amid increasing evils? Through, with and in the Holy Catholic Church, the same that He established such that he who hears the Church hears Christ. Again, we listen to Pope Pius XII, who wrote:

As Bellarmine notes with acumen and accuracy … Christ so sustains the Church [and] in a certain sense lives in the Church, [such] that she is, as it were, another Christ.

[St. Paul] without further qualification calls the Church “Christ,” following no doubt the example of his Master who called out to him from on high when he was attacking the Church: “Saul, Saul, why persecutest thou me?”

The Church is, as it were, another Christ!

This is why neither internal nor external struggles can ever weaken her; ever, no more than anything whatsoever can weaken Christ Jesus, King of kings and Lord of lords!

And yet, whether he realizes it or not, Benedict XVI makes a stunning admission when he states: “Catholic moral theology suffered a collapse that rendered the Church defenseless against these changes in society.”

The importance of this admission cannot be overstated:

My friends, the Holy Catholic Church – that is, what Archbishop Marcel Lefebvre often called “Eternal Rome” – can never be rendered defenseless against sin; no matter how pervasively it may abound either inside, or outside, the Church!

If what has been said by Benedict thus far is not stunning enough, consider the following admission:

What must be done? Perhaps we should create another Church for things to work out? Well, that experiment has already been undertaken and has already failed.

The only reasonable conclusion that one can reach, therefore, is that the post-conciliar “Church” of which Benedict speaks – by his own admission, and whether he fully appreciates it or not – is but an imposter. It is, in the words of Pope Pius XII cited above, “another building which has not been founded solidly on the teaching of Christ [but rather] rests on shifting sands and is destined to perish miserably.”

Those “shifting sands” are nothing other than the novelties and errors of Vatican Council II, and that “other building,” which arrogantly usurped the Catholic name, is the church-of-man presently headquartered in modernist Rome; an edifice that, praise God, is perishing miserably right before our very eyes.

And guess what folks, there is nothing that anyone can do to prevent it.

Passion Week is upon us. Please help us continue our efforts to denounce usurpers and imposters in defense of the one true Church of Christ.

Benedict’s Avvenire interview: A man of the Council speaks