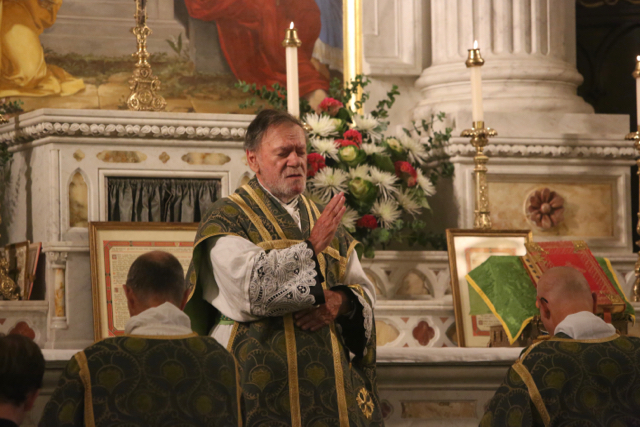 A recent four part series of blog posts written by Fr. John Hunwicke (an Anglican convert of the Ordinariate of Our Lady of Walsingham) under the title “Is the Pope a heretic?” are being hailed, even by certain tradition-minded persons, as an example of keen analysis.

Readers will most certainly recall the multi-part series of articles written by Fr. Jean-Michel Gleize, SSPX, which proposed to answer the same question; ultimately concluding that Francis’ stated intent in Amoris Laetitia simply to offer material for “reflection and dialogue” effectively exonerates him from the charge of heresy.

“To this question there can only be one answer: NO. And NO means, as Mrs Brexiteer May might put it, NO. Pope Bergoglio has NEVER, to my knowledge, formally enunciated doctrines which are unambiguously heretical.”[Emphasis in original.]

Is Amoris Laetitia – an Apostolic Exhortation disseminated to the entire Church – somehow “informal;” as if tantamount to a casual conversation between friends in a local coffee shop?

I’m not entirely certain what Fr. Hunwicke means by “formally,” but it appears that he means to speak of an infallible act.

“The claim one sometimes hears, to the effect that he has formally, as if from his chair, made doctrinal assertions which the Church has formally defined as heretical, is NONSENSE.”

From his chair; i.e., ex cathedra?

There isn’t even one moderately credible person making this claim. If Fr. Hunwicke “sometimes” hears it – as in, more than once – he’s apparently keeping company with idiots.

As we all know (well, most of us anyway), the Holy Ghost will not allow the pope to teach error ex cathedra.

“When such assertions tip over further, into the idea that he has ceased to be pope because of his alleged errors, the mistake is even more grievously EVIL because it runs the risk of detaching souls for whom Christ died from the Ark of Salvation, from the One Fold of the Redeemer.”

If a pope promulgated heresy in the form of an ex cathedra pronouncement, this would not so much mean that by that act he ceased to be pope; rather, it would be a matter of him providing proof positive that he is not pope.

In any case, this particular argument is a straw man as, again, no one of any regard whatsoever is even making this claim.

At this, Fr. Hunwicke comes to the heart of his argument:

“One easy reason for being confident that the Sovereign Pontiff has not formally taught heresy is the simple fact, confirmed pretty well every time he opens his mouth, that he despises theology and holds doctrine in not-even-barely-concealed contempt.”

Talk about NONSENSE! Heck, this might even be solemn nonsense.

Seriously, since when does one’s hatred of doctrine mean that one cannot formally hold and enunciate heresy?

I think it’s fair to say that every formal heretic harbors a certain hatred for the Church’s doctrines; in particular, the ones they obstinately contradict.

“To be a heretic, or, more precisely, to be a formal heretic, it is in practical terms necessary to operate within the respectable constraints of propositional discourse.”

Maybe it’s a British thing, but I don’t know for certain what is meant by “respectable restraints of propositional discourse.” It would seem that what Fr. Hunwicke means to say is that the only way Francis can prove himself to be a formal heretic would be if he promulgated something like the following:

“We declare, pronounce, and define that the doctrine which holds that God, at certain, times asks that we persist in adultery and fornication, is to be believed firmly and constantly by all the faithful.”

We’ve already covered the fact the Holy Ghost will not allow a pope to do such a thing.

“The fact that Bergoglio does not do this is proved by the fact, written large over this whole pontificate, that nobody ever quite seems to be sure what he means.”

This is absurd. In reality, there are those who simply refuse to believe that “Bergoglio” means what he says; Fr. Hunwicke obviously among them.

In the case of Amoris Laetitia, the text speaks for itself. One need only read it in order to discover the blasphemy and heresy therein.

“The DUBIA which the four Cardinals put forward provide a good example of this. Four men of erudition (not to mention seniority) thought they needed to ask the Bishop of Rome what he meant.”

Fr. Hunwick writes as if Francis hasn’t given anyone any indication whatsoever “what he meant” since Amoris Laetitia was published, or at the very least, since the dubia was submitted to him.

This is just factually incorrect (e.g., “there are no other interpretations.”)

“His tardiness, so far, in exercising the Petrine Ministry of Confirming his Brethren demonstrates his resolute determination not to be tied down by propositions. I do not believe that it is possible to convict such a man, operating such a policy, of being a formal heretic.”

Not be tied down by propositions?

Excuse me, but much of this dust up concerns Francis’ resolute determination to put forth heretical propositions in an Apostolic Exhortation under his own name; even going so far as to manipulate the Syonds in order to pave the way!

No one forced him to do so; he owns every last word of that dreadful document, and those words have an objective meaning.

As for the matter of being “tied down,” by which Fr. Hunwicke appears to be speaking of “material” vs. “formal” heresy:

By his reasoning, the only thing one needs to do in order to avoid conviction of formal heresy (in the case of a pope, judging and revealing himself as such) is to refuse all inquiries subsequent to having publicly proclaimed and disseminated teachings that are objectively heretical.

This simply isn’t the case.

An individual’s resolute refusal to affirm dogmatic teaching upon inquiry in the face of having published objectively heretical propositions most certainly does tie one down to the latter.

In the final part of his series, Fr. Hunwicke says that those who believe that Francis is a heretic “are guilty of a genre-error.”

“The analysis of ‘language games’ is every bit as necessary now as ever it was. Having a sensitive nose for differences of literary genre is as important for those who examine papal documents as it is for analysts of Horace and Ovid.”

In the end, this is little more than a less-sophisticated twist on Fr. Gleize’s approach. In both cases, the subjective is being used as a “get out of jail free” card that somehow trumps the objective meaning of a text that clearly contradicts defined truth.

For Fr. Hunwicke, it concerns Francis’ “resolute determination” to avoid being “tied down;” e.g., by answering the five simple questions posed in the dubia.

I, for one, find it interesting that both men are making the same fundamental error upon which much of Amoris Laetitia – Chapter Eight is constructed as its humble author insists that the subjective (“concrete complexities of one’s limits”) can turn objective mortal sin into “the most generous response which can be given to God” and even “what God Himself is asking” (cf AL 303).

The simple truth lost on both Francis and his excuse-makers is that the Church simply does not have the faculty to weigh subjective matters in such a way as to effectively excuse objective evil; whether it be adultery, fornication or heresy.

May it please the Lord to open their eyes.

I will give you the keys to the Council…

Is Francis a heretic?