In the aftermath of Cardinal Raymond Leo (the Lion) Burke’s initial response to Amoris Laetitia, wherein he offered an “interpretive key” to the text while suggesting that the nearly 60,000 word tome carries about as much magisterial weight as an entry in Francis’ personal diary, many Catholics expressed varying degrees of disappointment.

[NOTE: I encourage you to check out this post by a Fr. Ignotus at Rorate Caeli challenging the idea that Amoris Laetitia is not given with magisterial intent.]

Others, apparently less willing to admit that they had perhaps overestimated Cardinal Burke’s resolve, rushed to his defense; often suggesting that he would have more to say in the near future.

Well, they were right on at least one note.

Knowing full well that his beleaguered flock is under attack at the hands of the ferocious Bergoglian wolf, Cardinal Burke once again commented upon Amoris Laetitia.  This time, however, he did so without even bothering to mention the document by name; offering the faithful a mere wink-and-a-nod and no small amount of sheer hypocrisy.

In a speech given on May 7th at the Rome Life Forum – a gathering of pro-life and pro-family leaders – Cardinal Burke revealed himself to be among the most pitiable of characters; even more so arguably than Cardinal Walter Kasper who at least has the backbone to state his case plainly and to accept the consequences like a man.

Decrying the “secular understanding of the divine realities” so commonplace in our day, Burke said:

For example, today in the Church, there are those who refer to the objective reality of the grace of marriage as merely an ideal to which we more or less seek to conform ourselves. The mundane vision, which, because it is not true, leads to confusion and division within the Body of Christ, ends up by denying the fundamental principle of right reason, called the principle of non-contradiction, namely the law that a thing cannot be and not be in the same respect at the same time.

Psssst… He’s talking about Francis and his Love Letter to Lucifer! Hehehe…

If you think that’s pathetic, get this…

The Prince who is unwilling to risk any comfort whatsoever by plainly identifying (much less condemning) “those” who are threatening to lead souls to Hell went on to propose:

I present to you a reflection on the martyrdom which is inherent to our life in Christ … Martyrdom is a most compelling manifestation of the reality of Christ’s life within us, of the unity of our hearts with His glorious pierced Heart …

Cardinal Burke continued, making frequent reference to the writings of Fr. John Hardon on the topic:

Father Hardon developed his teaching on martyrdom to show the essential relationship of all forms of Christian witness to Christian martyrdom. A study of the Servant of God’s teaching will show how all witness involves a certain dying to self, a certain oblation of self to Christ for the sake of His saving work …

He expressed the call to the new evangelization most fittingly as a call to witness and ultimately to martyrdom. So many faithful, including myself, continue to follow the inspiration and direction which the Servant of God gave to us.

In precisely what way has Cardinal Raymond Burke – among the most well-traveled of international clerical celebrities – ever demonstrated a willingness to walk in the direction of martyrdom?

Sorry, but enduring the scornful gazes of his faithless confreres on those rare occasions when the College of Cardinals or broader body of bishops gather in the comfortable confines of the Eternal City doesn’t count.

And please don’t tell me that losing his position as Prefect of the Apostolic Signatura represented a form of martyrdom; it was no such thing.

Burke’s appointment to a figurehead position with the Knights of Malta was truly nothing less than a blessing, and a timely one at that.

No longer fettered by the daily demands placed upon those who serve in the Roman Curia, he was given a magnificent opportunity to leverage his credibility in service to those who are being deceived. How? Simply by condemning the errors of the present pontificate.

And what has he done with this opportunity?

Sure, Cardinal Burke offers the Traditional Latin Mass in various places throughout the year, but while this is a blessing for the faithful to be sure, it is also his privilege. In fact, knowing what he knows about liturgy, we may even say that it’s his duty to make himself so available.

I would also suspect that he gives wise counsel to people he knows and interacts with on a personal level, but again, this is his duty. 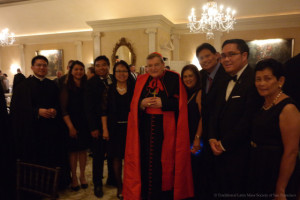 Beyond this, let’s be honest:

Raymond Burke is essentially a Banquet Bishop; a bon vivant and frequent flyer who moves about the globe from gala to gala and conference to conference, not infrequently as a pampered guest of well-heeled Catholic neo-conservatism.

Don’t get me wrong, I don’t begrudge the lifestyle of Cardinal Burke (or any Prince of the Church for that matter), but I adamantly denounce the degree to which he is failing to leverage his privileged position in defense of the faithful at this historic moment.

The most dangerous attacks being leveled against the Church in our day are coming directly from the Office of Peter!

This is no time for generic references to “there are those who…” It is time for all – laymen and clerics alike – to make their mettle known, and on this note, Cardinal Raymond Burke has, at least to this point, shown us very little.

In his address to the Roman Life Forum, the best Cardinal Burke could muster on behalf of the “many faithful who express to me their profound concerns for the Church in the present time,” was to say:

I urge them to deepen their understanding of the constant teaching and discipline of the Church and to make their voices heard, so that the shepherds of the flock may understand the urgent need to announce again with clarity and courage the truths of the faith and to apply again with charity and firmness the discipline needed to safeguard the same truths.

What in the Hell is talking about, you ask?

This is an example par excellence of the “diabolical disorientation” about which Our Lady forewarned, and make no mistake about it – its roots run directly back to the Council.

The problem here is twofold.

One, there is a palpable lack of manliness, not just on the part of Cardinal Burke, but every shepherd who sees the wolf at the gate and yet cannot bring himself to plainly warn the flock.

This virtual castration of our bishops began the very moment the Council decided that it was expedient to forgo proclaiming the Sovereign Rights of Christ the King.

I will have more to say on this relationship in an upcoming post, but for now suffice it to say that apart from a firm recognition of Our Lord’s Social Reign and a willingness to defend His rights and prerogatives, “soldiers for Christ” and “Princes of the Church” are nothing more than empty slogans.

Secondly, and more obviously, Cardinal Burke suffers from the failed conciliar mindset that imagines the truth to be so singularly compelling that faithfulness to the mission of the Church requires nothing more than professing and witnessing to the truth amid the cacophony of falsehoods apart from condemning error.

This amounts to a tacit denial of man’s fallen nature and the fact that we are drawn to sin.

That Cardinal Burke’s mind is well infected with this fallacy was made even more obvious in a recent interview with Dr. Thomas Stark, the complete video of which can be viewed at Catholic Family News.

Predictably enough, Cardinal Burke is being hailed by some for the content of the interview. In truth, however, it’s really just more of the same weak-kneed nonsense we’ve already heard.

As the interview progressed, I was hoping that Dr. Stark would ask the obvious question:

Since you clearly recognize the danger Amoris Laetitia represents, why not simply condemn it out of hand?

The question was never asked, but that doesn’t mean that we know not the answer…