Home
Blog Post
Who is “all Israel” of whom St. Paul speaks? 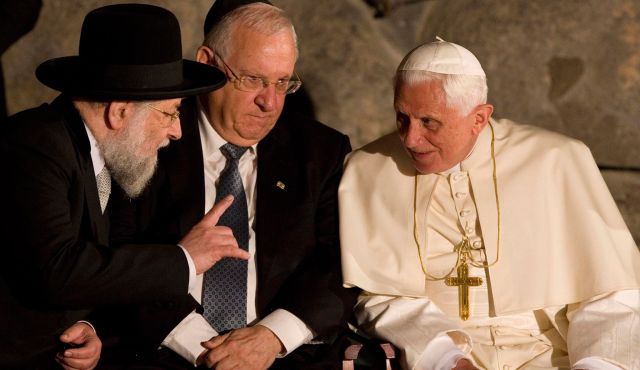 Based on some private conversations I’ve had regarding the content of the post, Nostra Aetate and Ephesians 2, it is apparent that additional clarity is necessary concerning St. Paul’s statement:

Lest you be wise in your own conceits, I want you to understand this mystery, brethren: a hardening has come upon part of Israel, until the full number of the Gentiles come in, and so all Israel will be saved; as it is written, “The Deliverer will come from Zion, he will banish ungodliness from Jacob”; “and this will be my covenant with them when I take away their sins.” (Roman 11:25-27)

A false, and unfortunately common, interpretation of this text leads one to believe that the unbelief of the Jews is little more than a Divine strategy for the benefit of the Gentiles; with the unfortunate punchline being that in spite of their unbelief the Jews will be saved.

Apparently, this thought has wide appeal (even among popes!), but that leaves one to ask what we are to make of the Lord’s own words, “He who rejects me rejects Him who sent me?” (Luke 10:16)

Are we to believe that one can at once reject Christ and yet embrace His offer of salvation?

Of course not; the Lord’s words are very clear.

So, what then shall we make of St. Paul’s assurance, “And so all Israel should be saved?”

In order to truly understand what St. Paul is saying, we must ask ourselves, who exactly is this “all Israel” of whom St. Paul is speaking?

For the answer, we need only refer back to a statement made a handful of paragraphs earlier when St. Paul made it clear that “all Israel” is not synonymous with the descendants of Abraham, or to use the Council’s language, “Abraham’s stock.”

This having been established, it is clear that when St. Paul says that “all Israel will be saved,” he is not referring to those among “Abraham’s stock” (his descendants in the flesh) who reject Christ and the New Covenant; rather, he is speaking of Abraham’s spiritual descendants through faith.

That St. Paul is referring to the “people of the New Covenant” (to quote Nostra Aetate once more) is further clarified when one makes note of his allusion to the Hebrew Scriptures in verse 27:

…and this will be my covenant with them when I take away their sins.

The Old Covenant was powerless to take away the sins of the people, only the Lamb of God, Jesus Christ, can do that. Reject Him and your sins remain; i.e., you are not to be numbered among the saved.

Again, folks, this is Catholicism 101.

Therefore, it is manifestly obvious that “all Israel” (Romans 11:26) refers to the members of the Church, “the children of God,” be they from among the Gentiles, or from among the Jews (like St. Paul himself), but in all cases, he is speaking of the followers of Christ.

Adding to the confusion for many is the Church’s traditional understanding that a large scale conversion of the Jews will take place in the last days.

In other words, there is a convolution of ideas taking place wherein the anticipated conversion of Israel in the latter days is treated as some sort of grandfather clause that allows the Jews of today to thumb their nose at Christ the King even as they are somehow assured a place in His everlasting Kingdom.

Among the confused is Josef Ratzinger, who citing the authority of a German nun, Hildegard Brem, wrote in his book, Jesus of Nazareth:

In the light of Romans 11:25, the Church must not concern herself with the conversion of the Jews, since she must wait for the time fixed for this by God, ‘until the full number of the Gentiles come in.’

Israel is in the hands of God, who will save it ‘as a whole’ at the proper time.

This utterly preposterous notion makes a fool of Our Lord who said (and it obviously bears repeating) “He who rejects me rejects Him who sent me.”

It also stands in direct opposition to the words of St. Paul who plainly admonished the unbelieving Jews:

And the Jews, seeing the multitudes, were filled with envy and contradicted those things which were said by Paul, blaspheming. Then Paul and Barnabas said boldly: To you it behooved us first to speak the word of God: but because you reject it and judge yourselves unworthy of eternal life, behold we turn to the Gentiles. (Acts 13:45-46)

Clearly, St. Paul was not under the impression that the unbelieving Jews were going to be saved “as a whole;” on the contrary, he plainly let them know that they had judged themselves “unworthy of eternal life” for having rejected Christ.

Even within the very same chapter of Romans that Josef Ratzinger misappropriates, St. Paul speaks of the unbelieving Jews as those who had been cut off by their unbelief and stand in need of being grafted in again (cf Romans 11:22-23).

One is hard pressed to overlook the diabolical nature of the conciliar approach to the Jews.

It’s as though the Evil One is saying to Our Lord, “So, these ‘chosen ones’ over which you wept are still dear to you? I will lead your own Vicar to abandon them!”

Recalling the impassioned preaching of St. Peter on the day of Pentecost, when he exhorted the Jews to baptism that they may be saved, one notes that the champions of Vatican II – the same who applaud the grave errors enshrined in the document Nostra Aetate – speak very well when they refer to the Council as “a New Pentecost,” as indeed something entirely new was thus born; a faith unrecognizable as having any connection with the faith of the Holy Catholic Church.