The best (or worst) thing about having a blog is that it can be used as a platform for sharing random thoughts; some serious, some not so much. To wit: 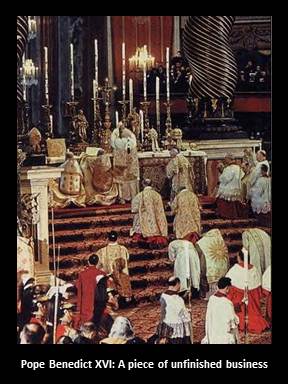 • The Holy Father is not abdicating simply because he is old, tired and weak and needs his rest. Don’t get me wrong, he is old, tired and weak, and could probably use as much rest as any man his age, but to narrow one’s understanding of yesterday’s announcement to this alone is essentially to say that the pope is being selfish. Rest assured he is not. He believes before God that the battles that must be fought in order to defend Holy Mother Church and Her children in this day are best fought by another. Someone with more physical strength, yes, but the war at hand is just as it  has ever been; an essentially spiritual one.

• While outright alarm is the wrong reaction, many seem to be treating Pope Benedict’s abdication almost too lightly. Clearly, the Holy Father considers the needs of the Church pressing, and likewise he seems to understand the necessity of a more vigorous pope to meet those needs somewhat urgent. Another way to say this is that he apparently believes that the Church is facing challenges that are so substantial, that delaying the transfer of power he desires to effect would not be prudent.

• If Cardinal Dolan is elevated to the Chair of St. Peter, perhaps we might look forward to seeing him bestow the honor of a papal knighthood upon Barack Obama just as he prepares to run for his third term.

• While some commentators are convinced that John Paul II set a non-negotiable precedent for the papacy in our day, such that it henceforth requires a man who can meet the physical demands of extensive global travel and an intense schedule of public events, I’m not one of them.

• On a related note, there is nothing endemic to the nature of the papacy that requires the degree of mobility to which we’ve become accustomed in recent decades. Indeed, one can reasonably argue that a “stay-at-home” pope might perhaps be more effective in managing a curia that all too often works against the Supreme Pontiff. As for the times and how they’ve changed, modern day communications make it all the easier for a stationary pope to effectively govern from Rome.

• If Cardinal Daneels is elevated to the Chair of St. Peter, one wonders if we should expect him to continue beating the drum for “collegiality” and the democratization of the Church.

• Not to rain on anyone’s papal parade here, but the Holy Spirit will not choose the next pope; the cardinals gathered in conclave will do so. Sure, we can be confident that the Lord will assist the cardinal-electors in the process, but there is no guarantee that they will collectively carry out His will.

• If Cardinal Mahony is elevated to the Chair of St. Peter, Archbishop Gomez might look forward to a new assignment.

• Any time between now and February 28th would be most opportune for the Holy Father to conduct at least one bit of unfinished business by celebrating a Solemn Pontifical High Mass according to the usus antiquior. (I might suggest doing so for the intention of a holy and intrepid successor.) As things stand today, Pope Benedict’s unwillingness to give public witness (not to mention episcopal example) to the infinite and enduring value of the ancient rite, has left the door open for a future pontiff, who may very well lack an appropriate love for the Tridentine Mass, to justify treating the contents of Summorum Pontificum and the Instruction that followed four years hence as if they are little more than the glorified personal sentiments of Josef Ratzinger.

• Some well intentioned folks in the more traditional-minded world are seeking comfort in the idea that no pope would dare undo the programs put in place by their immediate predecessor; e.g., Summorum Pontificum.  While I don’t expect the next pope to formally reject his predecessor’s intentions in this regard, he could do harm enough simply by doing very little or nothing to promote them, or by deliberately consecrating bishops and creating cardinals of men who are ambivalent toward the ancient rite.

“All the religions, we want peace…”

Happily not in Communion with Francis