Home
Blog Post
Urbi et Orbi: For unto us a vaccine is born! 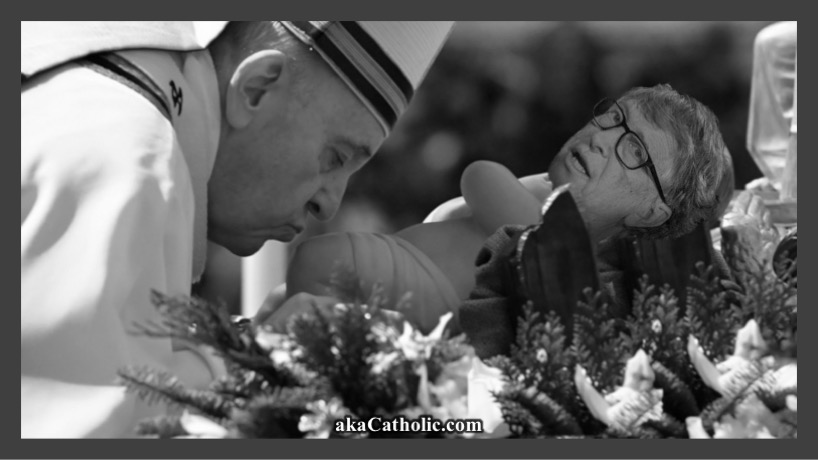 On Christmas Day, Jorge Bergoglio (stage name, “Francis”) delivered an Urbi et Orbi message and, as has been his custom since 2013, it was music to humanist ears.

Throughout the text of roughly 1,400 words, he invoked the theme of human fraternity more than half-a-dozen times, while repeatedly stressing that all people, regardless of their religion, are now brothers and sisters.

This, he insists, is what “the Church proclaims” in light of the birth of Jesus Christ. As for which church actually proclaims as much, stay tuned.

Jorge declared of Our Lord:

Those with even a passing knowledge of Sacred Scripture realize that this isn’t exactly true.

Is this the return thou makest to the Lord, O foolish and senseless people? Is not He thy father, that hath possessed thee, and made thee, and created thee? (Deuteronomy 32:6)

For thou art our Father, and Abraham hath not known us, and Israel hath been ignorant of us: thou, O Lord, art our Father, our Redeemer, from everlasting is thy name. (Isaiah 63:16)

Have we not all one Father? Hath not one God created us? Why then doth every one of us despise his brother, violating the covenant of our fathers? (Malachi 2:10)

These are just a few of the Old Testament citations whereby the inspired Word of God speaks of the Creator as the Father of all, and each man, therefore, as brother.

With this in mind, one comes to the horrible realization that Jorge Bergoglio, whom the naïve consider to be the Vicar of Christ, is essentially professing and leading others to believe that “this Child” changed absolutely nothing; at least, nothing of eternal significance.

Francis continued by providing insight into the false doctrine on redemption according to the counterchurch for which he speaks:

God has made this fraternal unity possible, by giving us his Son Jesus. The fraternity he offers us has nothing to do with fine words, abstract ideals or vague sentiments. It is a fraternity grounded in genuine love, making it possible for me to encounter others different from myself, feeling compassion for their sufferings, drawing near to them and caring for them even though they do not belong to my family, my ethnic group or my religion. For all their differences, they are still my brothers and sisters. The same thing is true of relationships between peoples and nations: brothers and sisters all!

Pay close attention to the way in which Francis and his kind imagine that the condition of mankind has been impacted by the birth of “this Child.”

He tells us that it concerns a flourishing of such things as fraternal unity, encounter, feeling compassion, drawing near, caring, relationships between peoples, and this explosion of human emotion misrepresented as “genuine love” is presently available to us because God made it possible. How? By giving us his Son Jesus.

As is often the case, Francis tells us what the church for which he speaks actually holds to be true, first, by denying it: In truth, theirs is a doctrine that has only  “to do with fine words, abstract ideals and vague sentiments.”

NOTE: For the record, the Holy Catholic Church, by contrast, teaches that true human fraternity and divine sonship are conferred (that is, made possible) in the waters of Baptism; i.e., these things belong exclusively to the members of Christ.

The Roman Catechism (or Catechism of the Council of Trent), for example, tells us that it is by rebirth in Christ, through the Sacrament of Baptism, that “our souls are replenished with divine grace, by which we are rendered just and children of God and are made heirs to eternal salvation.”

No Urbi et Orbi message delivered by Francis, in this the Year of Our Lord Two-Thousand and Twenty, would be complete without a blatant shout out to globalism.

Ever the obedient son of the United Nations, he made it a point to condemn “the various forms of nationalism.”

Then, just as one would expect, he turned his attention to the COVIDS – the globalists’ current weapon of choice – by saying, “Nor can we allow the virus of radical individualism.” (See what he did there?)

“Today, in this time of darkness and uncertainty regarding the pandemic,” he continued, “various lights of hope appear, such as the discovery of vaccines.” He then made it a point to stress the necessity of “vaccines for all.”

The people that walked in darkness have seen a great light! For unto us a vaccine is born! Happy Coviday!

In a transparent attempt to provide his earthbound, purely humanistic message with the veneer of Catholic tradition, Jorge concluded with prayers ostensibly addressed to Our Lord under a litany of titles; e.g., Child of Bethlehem, Infant Jesus, Babe of Bethlehem, Son of the Most High, Divine Child, and Eternal Word of the Father.

He wrapped up his prayerful petitions (more appropriately, supplications to Satan) by invoking Christ under the title “King of Heaven,” not earth, mind you, just Heaven.

In this, the world was provided with catechesis on the kingship of the “diminished and distorted” Christ of the counterchurch that was born at Vatican Council II. (See Pope St. Pius X, Notre Charge Apostolique)

In conclusion, I’d have to say that Jorge hit it out of the park in his latest Urbi et Orbi message, for those who have ears to hear, at any rate.

Are we in the last days?