For those who were unable to attend their local parish’s Pancakes for Patriotism or Fish Fry for Freedom (COPYRIGHT © 2013 United States Conference of Catholic Bishops – ALL RIGHTS RESERVED) and as yet may still be in the market for some Fortnight for Freedom / “religious liberty a la Vatican II” madness, a recent story in the Diocesan newspaper of Arlington, VA, the Catholic Herald, should do the trick.

According to the Herald:

It was an unusual sight June 27 at the Cathedral of St. Thomas More in Arlington. Catholics, Mormons, Lutherans and Anglicans joined chanting saffron-robed Buddhist monks, a Hindu man who read from the sacred Rig-Veda in Sanskrit and a Muslim who quoted passages from the Quran. All were there to show common support for religious liberty.

Attendees of the event, which was sponsored by the Diocese’s Ecumenical and Interreligious Affairs Commission (EIAC), may not have been served any fish, but they did have their appetite for religious indifferentism whet when they were treated to such delicacies as “Korean Won-Buddhist ministers and Theravada monks chanting from their sacred texts.”

They were even given an opportunity to be lectured on the ways of tolerance by a Muslim who exhorted, “we must not stand against any religion,” a fare that exceeds even the finest crème fraîche in overall richness.

According to the Herald, “It was not an evening of praying together, said Father Rooney [Chairman of the EIAC], but gathering to pray in one another’s presence.”

With that unwelcome hair in the soup duly split, the evening would have been incomplete without the local ordinary paying public homage to human conscience while extolling the virtues of United States Constitution, and indeed, this one didn’t disappoint.

In his closing remarks, Bishop Loverde said that the importance of religious freedom is emphasized by its being the first amendment to the Bill of Rights. He called it our first freedom. The bishop quoted from a USCCB document on religious liberty, “This is our American heritage, our most cherished freedom. If we are not free in our conscience and our practice of religion, all other freedoms are fragile.”

Fittingly, according to the Herald, the “prayer service” concluded with participants engaging in the anthropocentric ritual typically known as the “sign of peace.” 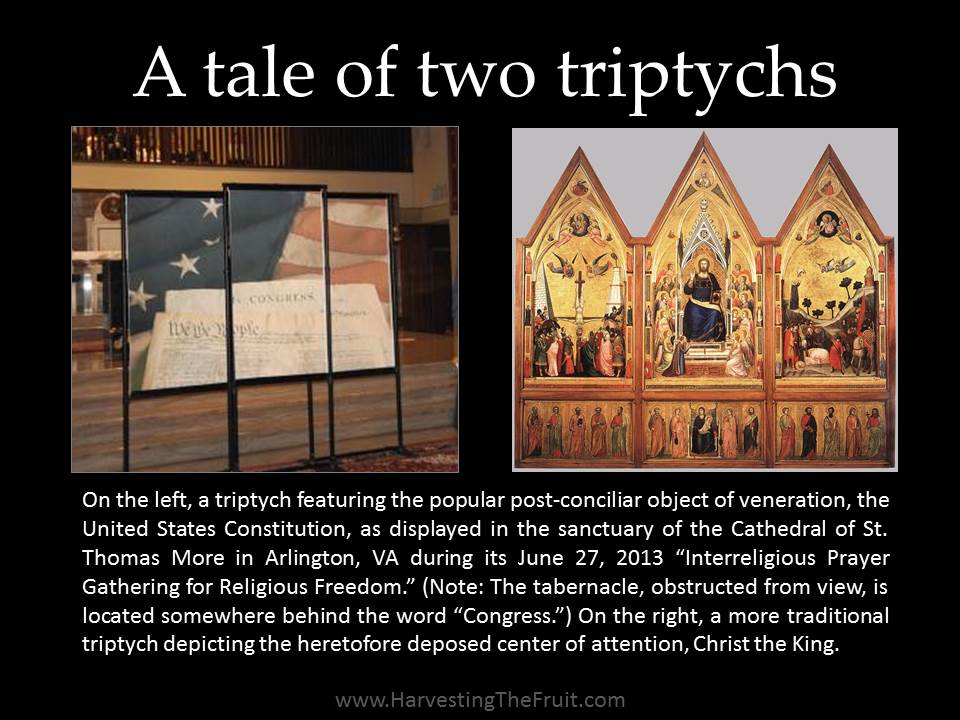 Some timely reminders from Cornelia Ferreira

Another politico-papal plea for peace