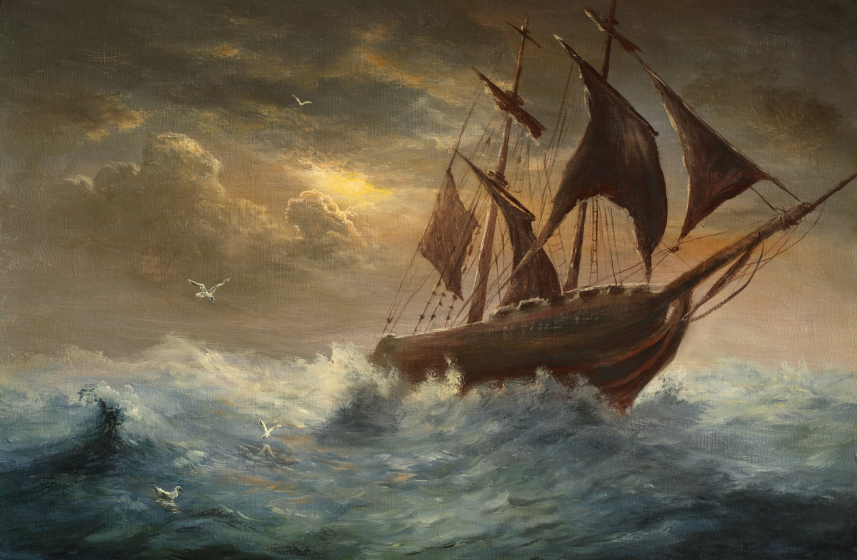 Vatican Insider is reporting that Pope Francis’ infamous interview with the founder of the Italian newspaper La Repubblica, Eugenio Scalfari, has been removed from the Holy See’s website.

How wonderful! The pope is finally coming to appreciate the power of his words and the damage they can cause when poorly chosen. Right? Well, not exactly.

While this is certainly welcome news, the details point directly to the burgeoning crisis that began in earnest the moment the Barque of St. Peter emerged from the conciliar dry dock stripped of nearly every outward sign of her God-given purpose, the Council Fathers having lowered from her mast the banner of Christ the King, hoisting in its place a pennant to the human person; her true identity as the solitary Ark of Salvation obscured from the sight of countless a perishing soul as she gives forth every appearance of yet another rudderless ship helplessly tossed about on the tempestuous seas of mere earthly concerns.

According to Vatican Insider:

In response to journalists’ questions about the reason for this decision, the Holy See’s spokesman, Fr. Federico Lombardi replied: “The information in the interview is reliable on a general level but not on the level of each individual point analysed: this is why it was decided the text should not be available for consultation on the Holy See website. Its removal is a final update on the nature of this text. Some mistakes were made regarding its value, which was questioned. The Secretariat of State took the decision.”

Is there any among us who could possibly mistake this public relations doublespeak for the preaching of churchmen determined to convert the world to Christ?

What Fr. Lombardi is saying is that the Holy See isn’t so much disturbed by the humanistic rhetoric contained in the interview as it is by the scrutiny of those who would dare to examine its individual claims in the light of tradition.

The message, along with its invitation to religious indifferentism, will remain, even as the text itself will not; i.e., we will have our cake and eat it too.

The interview, as readers may recall, contained any number of baffling, and frankly, embarrassing statements (like that twice-repeated bit about the greatest challenge facing the Church being youth unemployment and lonely old folks), but the most egregious assault on Catholic doctrine was the pope’s treatment, also twice-repeated, about conscience.

“Each one of us has his own vision of the Good and also of Evil. We have to urge it [the vision] to move towards what one perceives as the Good,” the pope said, you know, on a general level.

A statement – completely compatible with the Catechism of the Catholic Church – regarding the importance of conscience issue gave rise to many debates and discussions. Lombardi denied that the decision to remove the interview from the Vatican website was taken at the request of the Prefect of the Congregation for the Doctrine of the Faith, Gerhard  Ludwig Müller.

It’s not immediately clear whether Fr. Lombardi himself stressed this notion of “complete compatibility” (in the Italian original, tutto compatibile) or if the writer is editorializing, but in any event, the Holy See’s position is clear enough:

Let there be no mistake, the Vatican PR apparatus is at pains to make it clear that we should not consider the present action an acknowledgement that doctrinal concerns relative to the Scalfari interview are justified, which is precisely why Fr. Lombardi made it a point to say, bizarre though the claim may be, that the decision to remove the text from the Vatican website was made by the Secretary of State, not the CDF.

So, more than two weeks after Italian journalist Antonio Socci reported that Pope Francis “regretted” the publication of the Scalfari interview in L’Osservatore Romano and had “complained of it to the director, Gian Maria Vian, in Assisi on Oct. 4,” the, ahem, Secretary of State decided to pull the dreadful screed from the Vatican website; all of this and still not a peep from the pope who is allegedly concerned that his words may have been misunderstood.

Forgive me for robbing you of any optimism that this story may have engendered, but if this entire affair doesn’t paint a portrait of a rudderless ship helplessly tossed about on the tempestuous seas of earthly concerns nothing does.

The plain truth is that until either this or a future pope wakes up and preaches the objective truth entrusted to his care, rebuking the prevailing winds of secular humanism in the name of Christ, there will be no calm, and the Barque of St. Peter will continue to take on water as she is tossed to and fro on the watch of men of little faith.

Roman Rite Q&A: The Tone of Voice at Mass

Reform of the Roman Curia