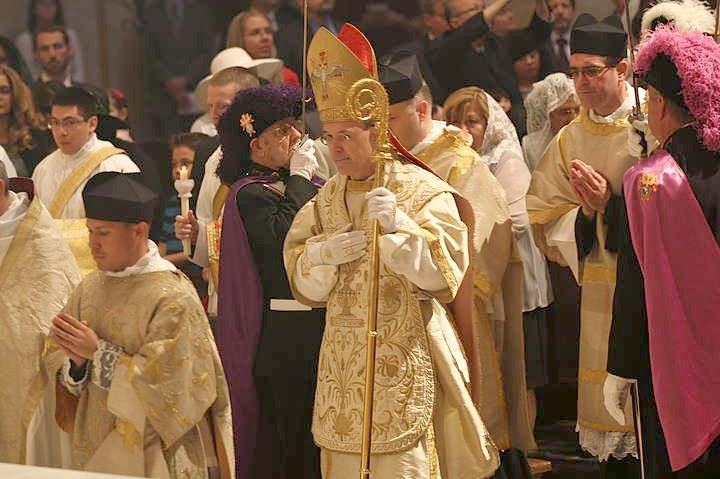 The interview of Bishop Athanasius Schneider recently published on the website Adelante la Fe (the Spanish language partner of Rorate Caeli) is quickly making its rounds in traditional (aka Catholic) circles, and for good reason.

In reviewing reactions, it occurs to me that we are very much a pendulum people; given to extremes and far too quick to grant hero status to better-than-average clerics at the drop of a biretta.

No doubt, Bishop Schneider offered some praiseworthy commentary in the interview, but a little perspective may be in order to prevent us from getting carried away.

Much of the attention (and praise) being given to His Excellency concerns his assessment of the Society of St. Pius X, a topic on which he is rather well qualified to speak after having recently visited two of the Society’s seminaries as an envoy of the Holy See.

Of the SSPX, Bishop Schneider said (among other things):

I am keeping a good impression of my visits. I could observe a sound theological, spiritual and human reality in the two Seminars … To my knowledge there are no weighty reasons in order to deny the clergy and faithful of the SSPX the official canonical recognition, meanwhile they should be accepted as they are …

Apparently, Bishop Schneider and I are in practical agreement, even though I am at liberty to say it more directly:

The withholding of formal canonical recognition of the SSPX, and likewise formal jurisdiction from their bishops and priests, is a grave injustice.

Bishop Schneider also seems to acknowledge that such recognition and jurisdiction is being withheld from the SSPX due to their unwillingness to endorse the Second Vatican Council as an “integral part of the Tradition of the Church.”

On this note, Bishop Schneider states:

I think the issue of Vatican II should not be taken as the “condicio sine qua non”, since it was an assembly with primarily pastoral aims and characteristics. A part of the conciliar statements reflects only its time and possesses a temporary value, as disciplinary and pastoral documents do.

So far so good.

When he gets down to articulating the reasons why lockstep acceptance of the Council (as an “integral part of Tradition”) should not be the necessary condition for the Society’s recognition, however, we find evidence that Bishop Schneider, for all of his laudable attributes, is himself infected with no small amount of the conciliar disease:

When we look in a two millennia old perspective of the Church, we can state, that there is on both sides (Holy See and the SSPX) an over-evaluation and over-estimation of a pastoral reality in the Church, which is Vatican II. A part of the conciliar statements reflects only its time and possesses a temporary value, as disciplinary and pastoral documents do.

While one can rightly say that Vatican II, according to every pope who has reigned during and since, formally enjoys no status beyond that of “a pastoral reality” (as Bishop Schneider puts it); the fact of the matter is, the conciliar texts are not the benign, blameless, time-bound decrees he paints them to be; rather, at the very least they contain grave invitations to doctrinal error (if not outright error in its own right).

Two brief examples concern the Council’s treatment of the Church’s relationship with the Jews, and its assessment of the heretical communities vis-à-vis salvation.

In other words, it simply is not reality to say that such “parts of the conciliar statements” possess “value,” temporary or otherwise.

As such, simply consigning the conciliar text to that which had value in a day-gone-by is not by any means a way forward; rather, the ambiguities and errors must be identified and condemned outright.

Furthermore, the Holy See, properly speaking, has not “over-estimated” the Council; rather, the post-conciliar popes (and those in positions of authority in the Church in union with them) have simply accepted the conciliar text for what it says and acted upon it.

In other words, it was in allowing the conciliar text to inform their words and deeds almost exclusively for nearly five decades that the popes gave rise to a new church that scarcely resembles the Holy Catholic Church, even as it operates under its name.

Likewise, it is untrue that the SSPX has in any way “over-evaluated” the Council’s importance. On the contrary; the damage that the Council has done is so immense as to be truly incalculable!

In short, denying, or at the very least downplaying, the central role of the Second Vatican Council in creating the current ecclesial crisis is a dead end that will only serve to perpetuate said crisis. This, unfortunately, is precisely the position Bishop Schneider appears determined to promote.

This much becomes clear when he says:

[The Society’s current condition] should suffice for a canonical recognition of the SSPX on behalf of the Holy See. Otherwise the often repeated pastoral and ecumenical openness in the Church of our days will manifestly loose its credibility and the history will one day reproach to the ecclesiastical authorities of our days that they have  “laid on the brothers greater burden than required” (cf. Acts 15:28), which is contrary to the pastoral method of the Apostles.

While the overall sentiment is admirable, I beg to differ with the suggestion that “the often repeated pastoral and ecumenical openness in the Church of our days” has ever had, much less has, any authentic Catholic credibility to lose.

And let’s not beat around the bush: That “history” is going to reproach the Holy See for withholding recognition from the SSPX should be the least of anyone’s concern; the far more breathtaking reality is that Almighty God will one day demand recompense of the popes who so denied them.

Moving away from the SSPX to broader concerns, Bishop Schneider was asked to address what he had labeled:

The five wounds in Christ’s liturgical mystical body: the priest turned towards the congregation, Holy Communion taken in the hand, the new Offertory prayers, the disappearance of Latin in liturgical celebrations and the performing of some ministries, such as those of lector and acolyte, by women.

As for how these wounds have been produced, Bishop Schenider insisted:

None of these liturgical wounds can even remotely be supported by “Sacrosanctum Concilium”, the Constitution on Sacred Liturgy of the II Vatican Council.

Once again, we see evidence of an untenable tendency to hold the Council practically harmless.

While it is true that Sacrosanctum Concilium does not directly call for any of the aforementioned five “wounds,” it did most certainly open the door for these unthinkable innovations (even if the majority of the Council Fathers could not foresee it) by virtue of the fact that the document is constructed upon the dangerous notion that the sacred liturgy is rightly considered a tool to be leveraged in the work of ecumenism.

This much is made clear in Art. 1 wherein the reason for “undertaking the reform and promotion of the liturgy” is stated thus:

Each one of the five liturgical innovations cited by Bishop Schneider was motivated by a desire to make Holy Mass a more comfortable experience for Protestants, and the unsavory truth is that the Council endorsed that misguided desire as if it were inspired by the Holy Ghost.

As a remedy, Bishop Schneider suggests (among other things):

While the restoration of the traditional Offertory to the Novus Ordo and encouraging traditional liturgical practices may sound wonderful at first blush, these suggestions begin with a false and decidedly dangerous premise; namely, that this bastard rite is by absolute necessity here to stay.

In spite of Benedict the Abdicator’s creative verbal posturing, the Novus Ordo Missae is not simply one form of the ancient Roman Rite; it is a brand new rite that was created in the 1960’s by a select group of impious men that met around a conference table to haggle over its contents; even going so far as to pen “Eucharistic Prayers” to replace the Canon of the Roman Mass as it had existed almost completely unchanged for some 1,500 years.

The solution to this unprecedented encroachment on holy ground is not to appoint a different group of men to gather around yet another conference table to hash out a reform-of-the-reform (which promises to be an endless endeavor), but to return to the Mass of Ages that developed organically like a pearl of great price over the course of two millennia.

Look, I get it; neither Bishop Schneider nor any other cleric who wishes to retain his “full communion” status is going to issue a public call for the abrogation of the Novus Ordo.

I offer these observations just the same to lend a bit of perspective to this dreadful situation wherein, difficult as it is to admit, even the shining stars of modern day Rome, including Bishop Schneider (whose views on ecumenical dialogue and religious liberty are thoroughly conciliar), obviously haven’t escaped the diabolical disorientation of which Our Blessed Lady forewarned.