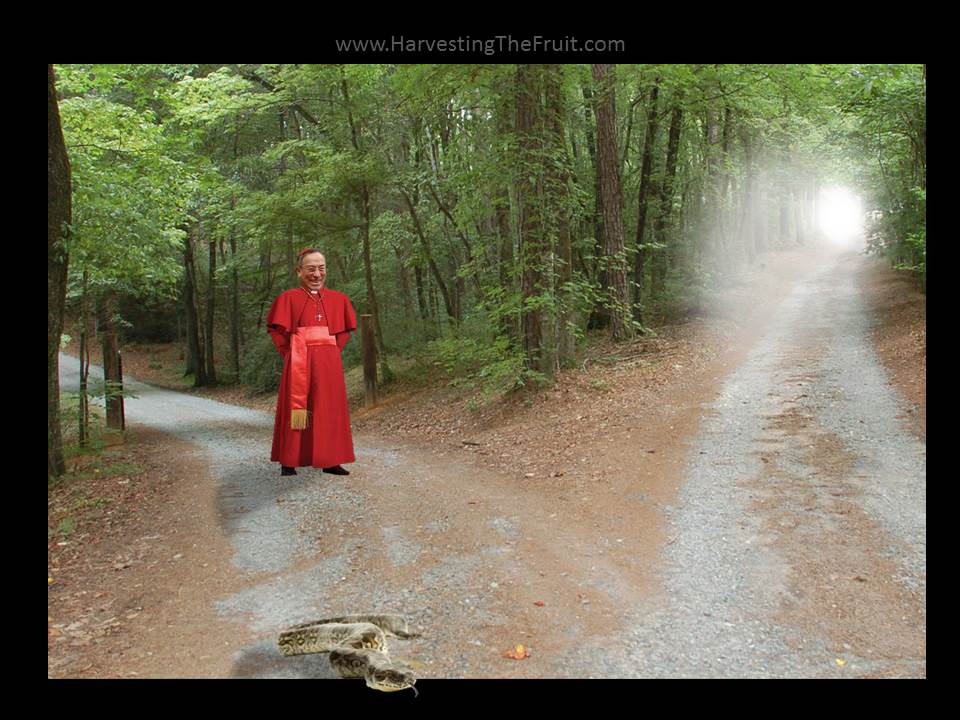 As I stated in a previous post, the modernist by definition is a cunning creature, a duplicitous sort who deals in nuance; deliberately moving about in the shadows, employing a vocabulary of familiar words but with an entirely different meaning.

And yet, the heart of the modernist is so swollen with pride, his ego so hungry for human acclaim, that he can resist the urge to brag of his grand designs in the full light of day for only so long. Given that the modernist, whether he knows it or not, is driven by the influence of the Evil One, this is to be expected.

We know that the Master Deceiver, he who once tempted Eve with sleight and subtlety, will one day, in the person of the Antichrist, offer to mankind a far more stark proposition, “It’s either me or the Lord, choose this day who you will serve.”

In other words, over time, Satan and his instruments, willing and otherwise, eventually grow bolder, bothering less and less to cloak their nefarious designs under the mantle of fidelity.

Enter once more Cardinal Óscar Andrés Rodríguez Maradiaga and his now infamous speech delivered at the University of Dallas on October 25th:

The Church could not continue posing as a reality facing the world, as a parallel “perfect society,” which pursued her own autonomous course, strengthening her walls against the errors and the influence of the world. This antithesis of centuries needed to be overcome.

And why did the traditional understanding of the Church as an autonomous perfect society, divinely endowed with truth and authority, need to be overcome? To make way for the church-of-man, of course.

The Ambassador of Newchurch continues:

The Church did not have a monopoly on truth anymore, nor could she pontificate on a thousand human matters, or hold stances denoting arrogance or superiority. Instead, she should go out into the common arena, plainly and humbly, and share in the common search for truth.

Dialogue should precede the mission, as a simple attitude of listening, to build on what is common, rather that to insist in what divides, and to count on the contribution of humanisms and of non-Christian religions, which will take us back to the foundation of any creed, any ideology. What is Christian has its substrata, first and foremost, in what is human.

There is no sugarcoating the plain fact that this man has lost the Faith, daring as he does to denounce “arrogance” even as he stands dressed as a Prince of Holy Church (speaking of posing) publicly professing his devotion to a movement dedicated to searching for “the truth” alongside humanists and other assorted practitioners of those false religions that reject Our Lord Jesus Christ!

The vision so boldly imparted here cannot but inspire in faithful Catholics the kind of righteous anger that moved Our Blessed Lord to take a whip of cords to the money changers. Even so, we should be grateful for the clarity of choice that lies before us.

Though for many readers of this blog it is hardly even necessary, juxtaposing the man made organization of which the pope’s emissary speaks against the Holy Catholic Church described by Pope Leo XIII lends additional focus.

This society [the Church] is made up of men, just as civil society is, and yet is supernatural and spiritual, on account of the end for which it was founded, and of the means by which it aims at attaining that end. Hence, it is distinguished and differs from civil society, and, what is of highest moment, it is a society chartered as of right divine, perfect in its nature and in its title, to possess in itself and by itself, through the will and loving kindness of its Founder, all needful provision for its maintenance and action. And just as the end at which the Church aims is by far the noblest of ends, so is its authority the most exalted of all authority, nor can it be looked upon as inferior to the civil power, or in any manner dependent upon it. (Immortale Dei 10)

If perhaps it wasn’t entirely clear amidst the confusion of the past fifty years, from 13 March 2013 onward this much is becoming ever more obvious with each passing day:

Barring a profound change of course, by Divine intervention or otherwise, those who call themselves Catholic – laity, religious and clergy alike – are barreling headlong toward a definite fork in the road.

On the one hand lies the trail well-traveled by the Saints, the solitary way for those who wish to remain in the One, Holy, Catholic and Apostolic Church, the only path to eternal salvation; on the other lies the via sinestra that leads directly to the church-of-man described by Cardinal Óscar Andrés Rodríguez Maradiaga.

While many can see that the fork just described is indeed fast approaching, others are as yet unable or unwilling. In time, their eyes too will be opened, and many among them will choose rightly, if and when the Lord allows push to come to shove.

Even so, others will most certainly choose wrongly; some with deliberate intent, others having been genuinely deceived. Mine is not to determine which is which, but simply to sound the alarm.

One thing I can say with absolute certainty, based upon unsolicited private correspondence received over the past few months, is that there are many members of the sacred hierarchy – men serving in parishes and dioceses all over the world – who also see precisely where we are heading, but who feel compelled at present to hold their tongues as a matter of prudence. Likewise with consecrated religious who have reached out in confidence as well.

For my part, I see no reason whatsoever to waste even another moment before declaring as loudly and clearly as I possibly can:

If the picture painted by the Bishop of Rome’s handpicked adviser accurately portrays the direction in which Pope Francis intends to lead, I WILL NOT FOLLOW!

The Washing of Feet