On September 21, in a blog post dissecting Pope Francis’ interview in America Magazine, I wrote, “Pope Francis is a modernist.”

The outpouring of indignation that I received in the aftermath prompted a more thoroughgoing examination of what it means to say that someone is a “modernist,” in which I made the distinction between the material modernist and the formal modernist, Pope Francis being the former.

Anyone who would like to argue otherwise is welcome to have at it. I would only ask that they do so while bearing in mind:

– A modernist is not going to call a press conference to announce his affinity for modernist thought, not typically anyway, but we’ll return to this point momentarily.

– Modernists most often deal in subtly and nuance, frequently cloaking their agenda in the language of Catholic doctrine, often while surreptitiously redefining terms.

– Modernists will often make statements that are irreconcilable with the Faith in one breath, while professing Catholic understandings of the truth in the next.

– Lastly, for those who wish to understand what modernism is and how it can be identified, in spite of its tendency to lurk in the shadows, there is no substitute for reading, slowly, studiously and prayerfully, the Encyclical of Pope St. Pius X, Pascendi Dominici Gregis.

All of that said, let’s return to the topic at hand.

Over the last few days, two members of Pope Francis’ select group of eight cardinals, commonly referred to as the C-8, chosen to advise the pope on the reform of the Roman Curia, made news with comments relative to modernism and the current pontificate.

First among them is Cardinal George Pell, the Archbishop of Sydney, who has been a good friend to Harvesting the Fruit of Vatican II over the years, and to whom I will always remain grateful.

In an interview with Vatican Insider, Cardinal Pell was asked to comment on charges leveled by the Superior General of the Society of St. Pius X, Bishop Bernard Fellay, on October 5th, that Pope Francis is “a genuine modernist.”

“To put it politely,” Cardinal Pell replied, “I think that’s absolute rubbish!  Francis said he’s a loyal son of the Church, and his record shows that.  He’s very, very concerned for the day-to-day life of the people, and for those who are suffering, those not well off and those in difficult situations.  He’s a completely faithful exponent of Christ’s teaching and the Church’s tradition.”

I would politely disagree, and there’s a reasonably good chance that at least one of his fellow G-8 members; namely, Cardinal Óscar Andrés Rodríguez Maradiaga, would as well, provided he and the pope are of like mind, which all indications are is a fairly safe bet.

In a speech delivered at the University of Dallas on October 26th, Cardinal Rodríguez Maradiaga said:

The Second Vatican Council was the main event in the Church in the 20th Century. In principle, it meant an end to the hostilities between the Church and modernism, which was condemned in the First Vatican Council. On the contrary: neither the world is the realm of evil and sin –these are conclusions clearly achieved in Vatican II—nor is the Church the sole refuge of good and virtue. Modernism was, most of the time, a reaction against injustices and abuses that disparaged the dignity and the rights of the person. (Thanks to Rocco Palmo at Whispers in the Loggia for providing the full text of the speech.) 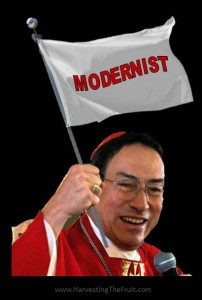 Did you catch that? According to this Prince of the Church, a man who is one of just eight handpicked cardinal-advisers to the pope, the Church, thanks to Vatican II, no longer harbors any hostility toward modernism, that which Pope St. Pius X called the “synthesis of all heresies.”

He even plainly acknowledged, lest there be any doubt whatsoever, that the modernism of which he speaks is that same  dreadful heresy that was condemned by the First Vatican Council, on which note it states:

“If anyone says: it may happen that to doctrines put forward by the Church, sometimes, as knowledge advances, a meaning should be given different from what the Church has understood and understands, let him be anathema.”

In perfect conformity with the church-of-man agenda of which I have written in the past, the justification for this bold public rejection of the Catholic faith is guess what? “The dignity and the rights of the person.”

If that’s not outrageous enough, Cardinal Rodríguez Maradiaga suggests that modernism – once condemned by an ecumenical council of the Holy Catholic Church – was but a justifiable response to the arrogance of the Catholic Church back when her prelates were faithful enough to profess her as the solitary custodian of the fulness of truth, goodness and virtue.

So, if modernism was justifiable, that would make the condemnation at Vatican I, as well as the threefold offensive against modernism of Pope St. Pius X (Pascendi, Syllabus, and Oath) what? Unjustifiable?

Don’t gloss over this point. What we have here is a cardinal of the Catholic Church publicly stating that the solemn condemnations issued at the First Vatican Council, and strengthened by Pope St. Pus X, have been overturned by Vatican II, a pastoral assembly unlike its dogmatic predecessors in kind, having openly declared absolutely nothing as properly binding. (See the Nota Praevia in Lumen Gentium.)

Folks, it doesn’t get much more black and white than this. This is material heresy.

While, as I said, modernists don’t typically go about waving flags to make the task of identifying them easy, we can at least be grateful to Cardinal Rodríguez Maradiaga for stepping out of the shadows.

So, now the question is, when will Pope Francis – if indeed he is not a like-minded modernist in his own right – condemn this outrage in an equally public way?