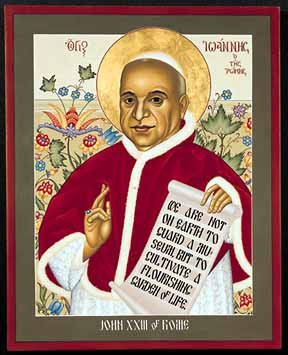 John Allen has a piece posted on the National Catholic Reporter website entitled, “Halo for John XXIII the ‘last act’ of Vatican II,” in which he highlights the contents of an article written by “one of Italy’s leading Catholic journalists,” Stefania Falasca, in Avvenire, the official newspaper of the Italian bishops. Allen writes:

In reply to the question of why Pope Francis approved sainthood for John XXIII without waiting for the customary second miracle, one of Italy’s leading Catholic journalists today offered a striking historical answer: Because it was the last unfulfilled request of the Second Vatican Council, the watershed assembly which “Good Pope John” convened …  Stefania Falasca noted that the famed French Dominican theologian Yves Cobgar [sic] recorded in his diary from Vatican (1962-65) [sic] that Belgian Cardinal Lèon Joseph Suenens at one stage planned to close a speech on the council floor with a request for the immediate canonization of Pope John XXIII “by acclamation”. It was a request, Falasca says, that was shared by many participants in the council and by “a multitude of the faithful.”

Given Suenens’ liberal bona fides (he wrote approvingly that “Vatican II was 1789 in the Church,” referring to the French Revolution), maybe those “crazy traditionalists” who believe that the canonization of John XXIII (to say nothing of John Paul II, for the present discussion) has much to do with “canonizing” the Council and all of its doctrinal ambiguities have a point.

Second, Falasca argues, the logic for setting aside the miracle requirement is that the desire that John XXIII be made a saint was expressly articulated within an ecumenical council, representing the will of what’s usually considered the most important teaching authority of the church. “No other candidate for canonization can actually claim such an exceptional status,” she writes.

Are you following the “logic,” such as it is?

This supposedly credible Catholic journalist, writing in the newspaper of the Italian bishops, has taken a secondhand account concerning the intentions of a modernist bishop, coupled it with the alleged emotional outpouring of other bishops and laity in the immediate aftermath of John XXIII’s death (the Santo Subito! of its day) and concludes that this essentially amounts to an act of the Supreme Magisterium of the Holy Roman Catholic Church.

Talk about a leap!

But Falasca isn’t finished. Just to make sure we numbskulls get it:

“Indeed,” Falasca writes, “the request for canonization of Pope Roncalli was the only request formulated by the council fathers that hasn’t yet been carried out, given that the publication of a universal catechism for the church has already happened.”

Yes, you read that correctly. The canonization of John XXIII is nothing short of a “request formulated by the council fathers!”

This is what passes for clarity of thought in the diabolically disoriented minds of so many Catholics these days. And yet, can there be any doubt that the Reporter’s devotees, many of whom routinely reject the more orthodox statements that the Council actually made, will gobble this dung up like caviar.