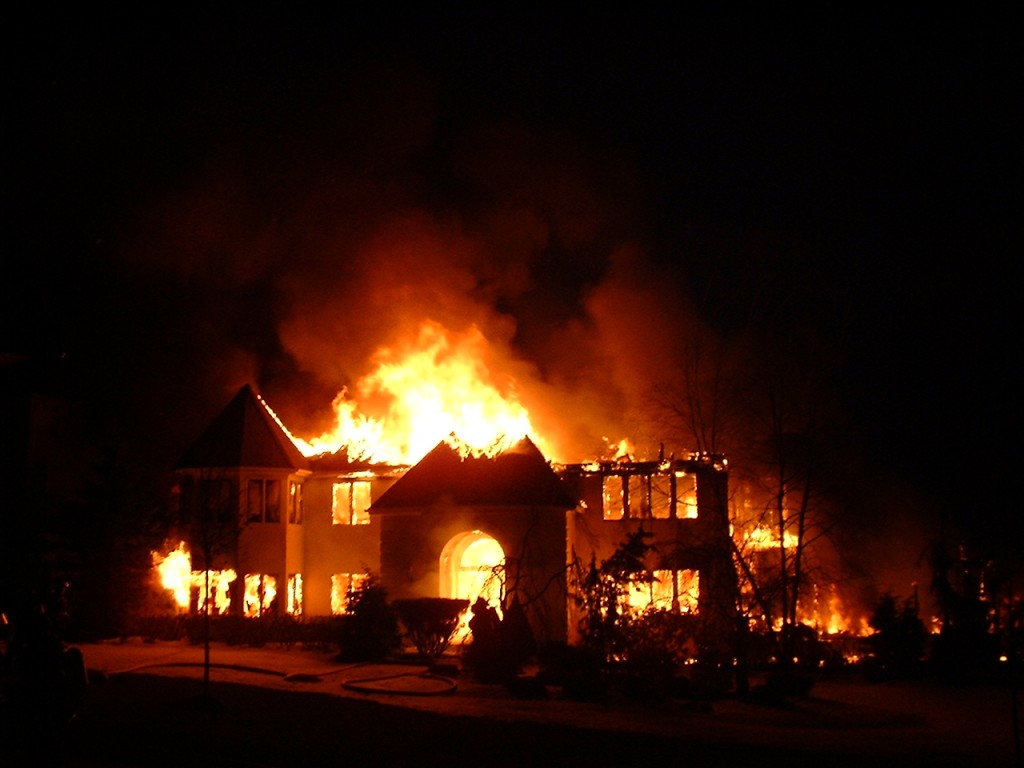 Once upon a time, there was a neighborhood with a very large old house flanked on either side by smaller, newer dwellings.

Pete, the owner of the big house, has always insisted that no one may enter without his express permission. Reasonable though this may be, the neighbor on Pete’s left, Mike, has always just dismissed out of hand the very idea that Pete has the authority to make any such demands. Naturally, this has ever been the source of a very serious division between Mike’s family and the household of Pete.

The neighbor to the right, Marc, on the other hand, has never questioned Pete’s authority in the matter. In fact, so intimate has their relationship and mutual esteem been over the years, that Marc has always considered himself Pete’s son, and Pete, Marc’s father.

One day, however, while Pete was away, Marc noticed that smoke was pouring from the windows of Pete’s house. The matter appeared rather serious, and so Marc made contact with Pete to seek his permission to enter the dwelling, so he might protect it from damage.

Pete answered, “I’ll grant the permission you seek, Marc, but not right now.”

When the smoke eventually gave way to flames, Marc, deeply troubled, sat on the front porch of Pete’s house to contemplate how best to respond. Just then, much to his horror, he heard the cries of Pete’s children, his own “brothers” and “sisters,” apparently trapped inside!

Fearing they might perish, Marc made the decision to enter Pete’s home, for he judged that saving the lives of the little ones was of supreme importance; taking precedence over the need to acquire permission.

When Pete found out what Marc had done, he resented the implication that he was failing to protect his own children, and he immediately began treating Marc as if he were an outsider. Pete seemed to forget the many years of loyal service that Marc had rendered to him, as a true son, during which he sacrificed much for the good of Pete’s family.

In time, Pete eventually came to treat Marc as though he and his household were even less deserving of esteem than Mike. In fact, word now has it that Pete is planning to make changes in the way he runs his household, and believe it or not, he even told his children that he intends to seek the advice of Mike, the neighbor who has ever disregarded him, in how he should do so!

Too farfetched to be true? Not entirely.

Now, even though analogies are never quite perfect, the story above illustrates (as if it’s not entirely obvious already) certain aspects of the relationship between the Church, such as it is currently governed by Pope Francis (Pete), the Society of St. Pius X (Marc), and the schismatic Orthodox Churches (Mike).

With this in mind, let’s take a closer look at the SSPX established by Archbishop Marcel Lefebvre.

For many an undernourished and ill-informed Catholic, Archbishop Lefebvre is primarily viewed as a villain for daring to consecrate four bishops in 1988 without the permission of Pope John Paul II.

As the analogy above suggests, the Archbishop fully recognized the pope’s legitimate authority in the matter, but ultimately his decision to consecrate without papal permission was dictated by what he considered necessity for the salvation of souls, which incidentally is what Canon Law calls “the supreme law of the Church,” the same that can, at times, justify disobeying legitimate authority.

Whether or not Archbishop Lefebvre is to be commended, condemned, or anything in between, for his actions is a question that has already been settled by the Just Judge before whom His Excellency stood immediately upon death. Pope Benedict XVI, for his part, has spoken for the Church in the matter by lifting the excommunication from the four living bishops who took part in the consecration.

Beyond the consecrations, the Society itself is looked upon with scorn today by both neo-conservatives and leftists alike for some combination of its attachment to the traditional liturgy, its rejection of the Novus Ordo Missae as detrimental to the faithful, as well as for its resistance to certain of the propositions set forth in the documents of the Second Vatican Council (like collegiality, religious liberty and ecumenism).

With regard to the sacred liturgy, Summorum Pontificum, in addition to “liberating” the traditional Mass from the utterly scandalous restraints placed upon it by Paul VI and John Paul II, essentially neuters the pseudo-urgency fabricated by modernists relative to the Society’s opinion of the Novus Ordo.

Why on earth, one wonders, is it so important for this one priestly society, the majority of whose members would willingly die a martyr’s death to defend the authentic Faith, to applaud the supposed merits of a 40 year old rite that Cardinal Ratzinger aptly described as “a banal on the spot fabrication,” even as the world is littered with “full communion” Catholic parishes that are home to countless liturgical nightmares week in and week out?

The answer; it’s only important in the eyes of men with a broader agenda and those too stupid to know any better.

As for the Council, there isn’t a Catholic theologian worth a felt “Jesus love me” banner that will deny that the same conciliar propositions that trouble the SSPX are indeed in desperate need of further examination and explanation. None of the questionable texts are reasonably considered by any credible person to be the stuff of infallible teaching.

In any case, this brings us to “Pete,” he who in the present day is none other than Time Magazine “Person of the Year,” Pope Francis, the Bishop of Rome who has a warm embrace for pretty much everyone, except of course for “triumphalistic restorationists” like the SSPX.

In his Apostolic Exhortation, Evagangelii Gaudium, the same of which Cardinal Burke said, “I haven’t quite figured out in my mind exactly how to describe it,” Pope Francis said:

“…in the dialogue with our Orthodox brothers and sisters, we Catholics have the opportunity to learn more about the meaning of episcopal collegiality and their experience of synodality.”

In other words, in calculating how best to dilute the papacy’s God-given authority, Pope Francis thinks it a grand idea to take a place at the knee of “Mike,” to avail himself of the wisdom of a people who have ever thumbed their nose at his venerable Office, rejecting the constitution of the Church as Our Blessed Lord established it.

No, the analogy with which I opened isn’t perfect, but its greatest deficiency lies not so much in over-simplifying a complicated situation, but in failing to adequately convey the immense gravity of the tragedy that has befallen the Household of God.

The SSPX’s relationship with Francis: Is it traditional?

A poem apropos of Lent