Home
Blog Post
The “Profession” of the Kazakhstani Bishops 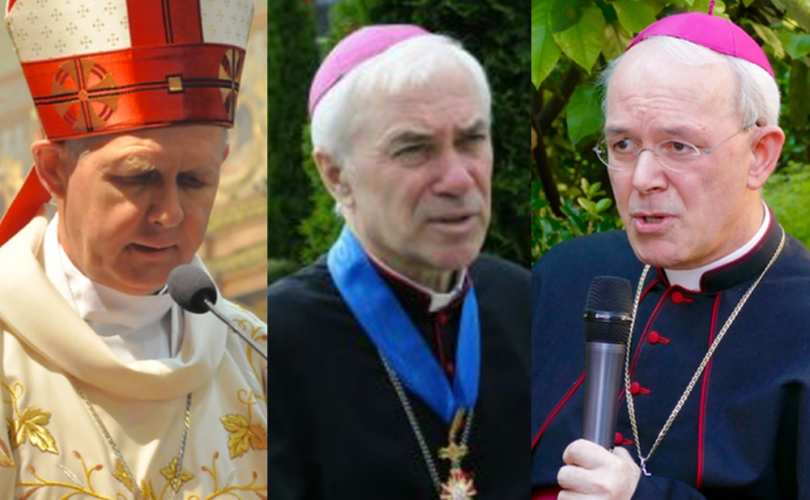 Yesterday it was reported that two more bishops – Archbishop Carlo Maria Viganò, former Apostolic Nuncio to the United States, and Archbishop Luigi Negri, Archbishop Emeritus of Ferrara-Comacchio – added their names to the “Profession.”

Since then, news of the document has been spreading in Catholic circles like wildfire, and with it, hope that this just might be the beginning of what will soon become a tidal wave of episcopal opposition to the Bergoglian agenda.

In the six-page document, the Ordinaries, all from Kazakhstan and including auxiliary Bishop Athanasius Schneider of Astana, say that the Pope’s interpretation … is ‘alien to the Church’s entire faith and Tradition.’”

Rank and file Catholics, desperately seeking a shepherd with enough testosterone in his veins to protect the flock from the Bergoglian wolf, have taken to social media to hail the bishops for their faithfulness and their courage.

Unbeknownst to them, however, these poor undernourished souls still haven’t found what they’re looking for, and moving forward, they’d likely have more luck tracking down Big Foot than a bishop with a backbone.

As just a casual reading of their text reveals, the authors of the “Profession” are so Hell bent and determined to avoid mentioning by name, much less blaming, the heretic-in-chief who created this mess that it’s embarrassing.

Forget the headlines and the news reports – the hero-bishops don’t utter even a peep about “the Pope’s reading” or “the Pope’s interpretation” of Amoris Laetitia.

Even if they did, the very suggestion that Francis is misreading or misinterpreting the text of his own personal Love Letter to Lucifer is patently absurd.

So, what does the “Profession” actually state?

After the publication of the Apostolic Exhortation “Amoris laetitia” (2016) various bishops issued at local, regional, and national levels applicable norms regarding the sacramental discipline of those faithful, called “divorced and remarried,” who having still a living spouse to whom they are united with a valid sacramental matrimonial bond, have nevertheless begun a stable cohabitation more uxorio with a person who is not their legitimate spouse.

The aforementioned rules provide inter alia that in individual cases the persons, called “divorced and remarried,” may receive the sacrament of Penance and Holy Communion, while continuing to live habitually and intentionally more uxorio with a person who is not their legitimate spouse. These pastoral norms have received approval from various hierarchical authorities. Some of these norms have received approval even from the supreme authority of the Church.

That’s it. This singular mention of “the supreme authority” is as close as the bishops dare come to identifying the actual perpetrator of this unprecedented attack against the Catholic faith.

Francis didn’t simply bestow his “approval” upon the aforementioned norms; he has taken bold and deliberate steps to see to it that they were enshrined in the Acta Apostolicae Sedis and thus received by the entire Church – not just at local, regional, and national levels – but as “authentic magisterium.”

And let us not forget that this came only after a well-planned, multi-year offensive that included Francis’ strategic invitation to Cardinal Kasper to address the consistory of 2015, his manipulation of the two Synods on the Family, and the promulgation of Amoris Laetitia – a text that was all but written well before any of this even took place.

Even so, the bishops could do no better than to hint at Francis’ involvement in attacking the immutable truths about sacramental marriage?

As may come as no surprise, the bishops saw fit to cite the Second Vatican Council – the single greatest assault on immutable truth that has ever taken place in the Church – no less than five times.

If you think that’s laughable, get this…

They went on to quote the post-conciliar Catechism:

“Even the supreme authority in the Church may not change the liturgy arbitrarily, but only in the obedience of faith and with religious respect for the mystery of the liturgy” (Catechism of the Catholic Church, 1125).

Afterwards, they actually claimed recourse to the authority of none other than Paul VI – the disastrous pope whose liturgical disobedience, disrespect and arbitrariness is legendary – citing him twice!

Perhaps most indicative of the diabolical disorientation that is so clearly at play, the bishops stated:

This practice therefore represents a substantial alteration of the two thousand-year-old sacramental discipline of the Church. Furthermore, a substantially altered discipline will eventually lead to an alteration in the corresponding doctrine.

Inasmuch as the present situation is concerned, this is exactly backwards.

Amoris Laetitia, which is mentioned in the “Profession” just once, and then only as a historical point of reference, first  went about setting forth “alterations in the corresponding doctrines” – otherwise known as heresies (e.g., the Divine Law is too difficult for some persons to keep, Christian marriage is but an ideal, God wills that men should persist in adultery, etc.)

It was only after this that steps were taken by Francis, the author of that dreadful document, to alter the two thousand-year-old sacramental discipline of the Church; thus revealing for all to see his subjective intent.

Why did the bishops choose to ignore this reality?

Could it be because acknowledging as much would be tantamount to identifying Francis as the formal heretic that he most certainly is?

By dishing up this sobering reality just as the party is getting started, I am inviting criticism from the merchants of trad-con media, though I don’t expect to be named. (Do you see a pattern?)

Seriously, be on the lookout for another one of those Remnant videos with Michael Matt lecturing us on how deserving of esteem the Kazakhstani bishops are in spite of their failure to address the actual problem; similar to the way in which we should admire Cardinal Sarah simply because he agreed to offer the traditional Mass at Chartres (even though he’s just as likely as not to extol the virtues of the Novus Ordo in his homily), and how Cardinal Burke should be viewed as our ally even as he declares that the SSPX in schism.

In conclusion, though the Profession of the immutable truths about sacramental marriage may seem better than a stick in the eye, it is actually far worse.

If we’ve learned anything from the time of Vatican Council II to the present day it’s that simply repeating the truth isn’t enough; rather, it is necessary to identify not just heresies but the heretics, by name, who abuse their privileged positions to propagate them.

Toward the end of their “Profession,” the bishops speak of the duty that they have toward the faithful, saying, therefore “we are not allowed to be silent.”

And yet, on the most important points of all, there is nothing but silence.

As such, inadvertently or not, the bishops end up providing cover for the greatest threat to the faithful in our day, Francis.

This being so, you won’t find any puff pieces applauding the authors of the “Profession” for their courage on these pages.