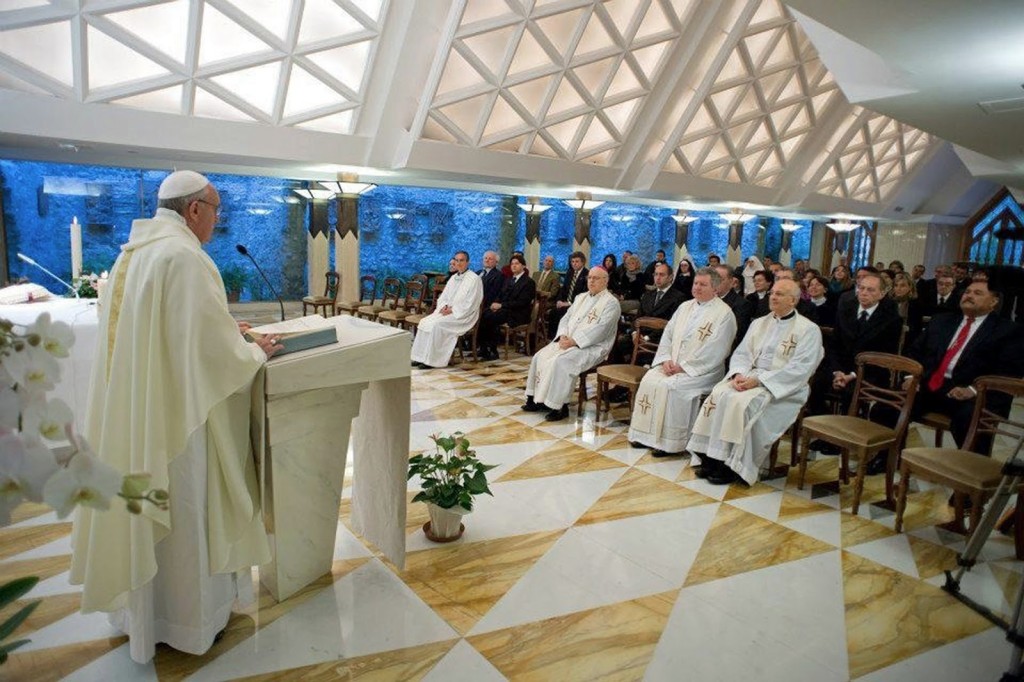 The daily Mass reflections given by Pope Francis at Santa Marta typically shed precious little light on the Catholic faith. That’s not to say that they’re entirely useless, however… [NOTE: A transcript of this video is below. I will include one whenever possible from this point forward for those who are unable to watch the video.)

As most of us have come to realize, the daily Mass reflections given by Pope Francis at Santa Marta typically shed precious little light on the Catholic faith.

That’s not to say that they’re entirely useless, however. They do manage to provide insight into “Jorge’s faith,” such as it is, and the modernist mind that lurks within the current Bishop of Rome.

On November 23rd, for instance, L’Osservatore Romano reported Pope Francis as preaching on the readings for that day:

A widow is the only woman who does not have a husband to protect her; a woman who must make do as she can, who lives on public charity.

OK, fair enough, that’s the historical context for widowhood as it is found in Sacred Scripture, but then he continued:

I like seeing in the widows of the Gospel, the image of the ‘widowhood’ of the Church who awaits Jesus’ return. Indeed, the Church is the bride of Jesus, but her Lord has left, and her one treasure is her Lord.

Think about this… The widow, according to Francis, does not have a husband to protect her and must do as she can…
And this to him is an image of the Church.

Seriously? If the Church had no “husband” to protect her, and a Divine one at that, this man would have destroyed the Church several Scalfari interviews ago!

In any case, I’ve linked the article below [above] so you can read the reflection in its entirety for yourself. If you do, what you’ll find is that Francis refers to the supposed widowhood of the Church no less than four times.

Is this bizarre ecclesiology headline news?

Not really. Pope Francis has been treating us to a steady stream of heterodoxy almost from the moment he stepped onto the balcony of St. Peter’s and bid the world a “Buona sera.”

And yet, it is stunning nonetheless to imagine that this man; the man that most of the entire world considers the voice of Catholicism, actually believes that the Church can be likened to a widow whose spouse is dead and gone.

Where on earth did he ever get that idea? In other words, what informs this manner of thinking?

The answer is at once simple and tragic: You see, Francis believes neither in the Resurrection of Our Lord, nor in His sacred divinity – at least not as the Church believes these magnificent truths.

He made this clear some time ago when, during one of his insult-laden rants against so-called “traditionalists” (aka Catholics), he said:

I’ve written about this in the past, but it bears repeating: As every faithful Catholic most certainly knows, it simply is not possible for the human mind to conceive of a Resurrection that is more majestic than that of the real one. In fact, so majestic is the “real Resurrection” that the human cannot fully comprehend it!

Those who believe otherwise, like Pope Francis, can do so only because they harbor an image of Christ that is “diminished and distorted” (cf Pope St. Pius X, Notre Charge Apostolique), as if in death Our Lord managed to bequeath to the “widow Church” little more than a stellar example for those who wish to engage in random acts of kindness.

At the very heart of Francis’ “widow Church,” as well as his stunning lack of appreciation for the majesty of the Resurrection, lies a Christological heresy. Even as he occasionally exploits the language of tradition, ultimately he preaches a Christ that is effectively reduced to a mere man.

Don’t take my word for it; he says so himself. For instance, on the Feast of the Lord’s Resurrection, no less, he said:

Out of love for us, Jesus Christ stripped himself of his divine glory, emptied himself, took on the form of a slave and humbled himself even to death, death on a cross.

Once again, the faithful Catholic must object: It simply is not possible for Our Blessed Lord to have stripped Himself of His divine glory.

For the sake of argument, though, let’s imagine that it is possible. Ask yourself, if Jesus did indeed strip Himself of His divine glory, this would render Him what?

Little more than a man…

This is why Pope Francis is pleased to envision a widow Church. He apparently imagines that Jesus is simply a man who died like so many others, leaving behind a grieving Bride who, anticipating reunion with her Spouse upon her own final day, is able only to regale her children with tales of their father’s distant legacy.

It is for this reason that the preaching of Pope Francis, like that of his post-conciliar predecessors, so often paints an image of a Christ that is bereft of His Social Kingship, and who stands shoulder-to-shoulder with idols only to be treated as if He has no more rights and prerogatives in society than the many false gods of this world.

In his assault against the true faith at Santa Marta the other day, Francis continued:

The Church, when she is faithful, leaves everything waiting for her Lord. However, when the Church is not faithful … seeks to make do with other things, with other securities, more from the world than from God.

Of what “other securities” does Francis speak?

For those who have been paying attention it’s pretty obvious … He’s talking about the venerable disciplines and practices of the Church and the immutable doctrines of the faith from which they spring.

He’s been telling us as much for some time now.

Consider, for instance, the following comments made in his 2013 interview with Fr. Anthony Spedaro of so-called “restorationists”:

Those who today always look for disciplinarian solutions, those who long for an exaggerated doctrinal ‘security,’ those who stubbornly try to recover a past that no longer exists¬ – they have a static and inward-directed view of things. In this way, faith becomes an ideology.

Or perhaps this from Evangelii Gaudium:

More than by fear of going astray, my hope is that we will be moved by the fear of remaining shut up within structures which give us a false sense of security, within rules which make us harsh judges, within habits which make us feel safe, while at our door people are starving and Jesus does not tire of saying to us: ‘Give them something to eat.’

Did you get that? Discipline, doctrine, and rules offer only lead to harshness and judgmentalism according to this pope.

It seems rather clear, does it not, that in denouncing “other securities … of this world,” Francis is priming the pump, if you will; he’s tipping is hand yet again and setting the stage for the Synodal exclamation point that he is soon to provide.

In any event, therein lies the solitary value of his Santa Marta reflections; they give us a glimpse into the modernist mind of this pope who will undoubtedly go down in history as one of the most disastrous.

And so, on some level, we can be thankful for Francis’ utter inability to keep his whimsical thoughts to himself.

Specifically in the present case, we can be grateful for having been informed that the Apostolic Exhortation to come will be written by a man who sees the Church’s immutable practices as providing little more than a false sense of security.

We can also be thankful for having been informed that the Church insofar as Francis is concerned, is but an earthly enterprise that must busy herself with human concerns, presumably in order to fill the void that was created when her spouse and Lord “left” her a weeping “widow,” and the faithful little more than fatherless children.

This being the case, should the Church recover from this crisis, future generations will look back on us with pity as the poorest of bastards indeed. God help us.