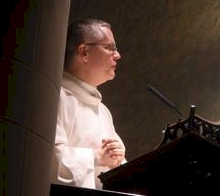 Diabolical disorientation is no laughing matter; in fact, it’s nothing short of a tragedy.

That said, it really is borderline amusing to see “conservative” Catholic commentators trying to convince themselves that the Church isn’t in crisis.

On June 11th, for example, Deacon Greg Kandra published a blog post entitled, “The Myth of Catholic Decline,” (brought to you by Patheos – Where the Pathological Ethos of the Neo-Catholic Blogger Intersects with the Worldwide Web®) that went a step further still.

According to him, things aren’t just OK in Post-Conciliar Catholicland; when it comes to vocations in places like Europe and North America, the growth is “genuinely impressive.”

“Truth be told, the numbers in parts of the United States—like Raleigh, for example—are historic,” he noted.

“And converts, of course, keep coming.”

Upon visiting a Dallas area parish last year, the place was “so busy and bustling,” Kandra told readers, it left him “thunderstruck.”

What the deacon didn’t attempt amidst all the revelry was to hazard a guess as to why the Catholic Church is now considered a viable option for religious consumers in the Protestant-dominated Bible Belt, but let’s not get ahead of ourselves.

While one may be tempted to analyze the demographic data Deacon Kandra cited, (e.g., by pointing out that the “Research Triangle” area of North Carolina has witnessed, over the last several decades, an explosion of new residents from other states thanks to the Hi-Tech boom) that would be perhaps the most flawed response of all.

Because doing so would lend the appearance of relevance to an utterly irrelevant argument.

Deacon Kandra, you see, has essentially adopted the same earthbound mindset that infects the thinking of today’s ecumenists who approach the topic of unity as if it were but a numerical concept, when in truth both are guilty of overlooking the far more important, and relevant, spiritual reality of the situation.

In the present case, the relative health of the Catholic Church in our day, a spiritual condition, can in no way be demonstrated via demographics.

There was time when this wasn’t entirely the case; back when the Church was truly militant, countercultural, and concerned first and foremost with promoting the reign of Our Lord Jesus Christ. (You know, back when the mission that Christ gave to His Church was still on the ecclesial radar screen.)

Back then (read, before Vatican II), to be Catholic pretty much meant to think and feel with a Church that stood against many of the worldly ideas reflective of a humanity hell bent on worshipping itself. A rise in Catholic statistics (like Mass attendance, vocations, participation in the sacraments, etc.) was therefore a reasonable, even if less-than-perfect, measure of the degree to which the Church was successful in converting the world, and the worldly, to Christ.

Once the bishops adopted the notion that man enjoys a positive right to religious liberty as a function of human dignity (Dignitatis Humanae – 2) and collectively decided to operate from the conciliar belief that “all things on earth should be related to man as their center and crown” (Gaudium et Spes – 12), however, demographic data became far less meaningful.

Think about it: For every self-identified Catholic in our day who believes that marriage is between one man and one woman; that abortion is intrinsically evil, and that the Holy Catholic Church is the one true faith apart from which there is no salvation, there’s a veritable busload of others who reject one or all of the same.

Sure, converts keep coming, but who’s kidding who?

When a former-protestant is welcomed into the Church today, is it more accurate to imagine that a heretic has thus been Catholicized, or that the heretic has thus joined a Church that he judges to have been sufficiently protestantized? If we’re honest, we must admit that it’s anyone’s guess.

Likewise, when Deacon Kandra visits a parish in Dallas, the parking lot of which can barely accommodate the traffic generated by its midweek activities, is it any better than a coin toss that anything taking place within its walls is recognizable as Catholic, including the liturgy?

The numbers, in other words, mean exactly nothing relative to the Church’s spiritual condition; i.e., her faithfulness to the mission that was given to her by Christ.

With all of this in mind, I’m reasonably certain that reports of the Catholic faith’s incline have been greatly exaggerated.

Pontifex Humilis Maximus – Pt. 2: A denial of the resurrection?