Home
Blog Post
The gravity of the canonizations (God forbid!) 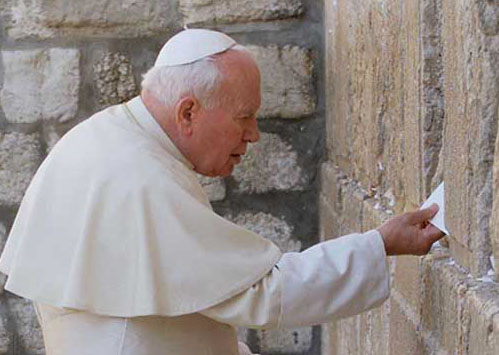 A recent article by Cindy Wooden of Catholic News Service on the upcoming canonizations (May God in His mercy forbid them!) aptly describes what the Masons and other assorted enemies of the Church would have considered an unattainable Utopian ideal just sixty short years ago.

Blesseds John XXIII and John Paul II left lasting marks on the way the Catholic Church understands other religions and the way it interacts with believers of other faith communities.

While most readers, traditional and otherwise, may feel compelled to breeze right past this apparent understatement of the century, one must be very careful to note that what Wooden appropriates to “the Catholic Church” is really nothing more than the flawed “understanding” (or more properly, misunderstanding) of sinful men who have departed from the Faith in word and deed.

The Catholic Church, the Mystical Body of Christ that is the Divinely endowed bulwark of truth, can never fail to recognize “other religions” as necessarily false, and their adherents as being in desperate need of conversion to the one true Faith, and therefore to interact with each accordingly.

Individual Catholics, even popes, by contrast, can sometimes falter in such matters, as in the cases of John XXIII and John Paul II; all of which underscores the sheer magnitude of their proposed canonizations (May God in His mercy forbid them!) and the ramifications such would promise for the Church and for the world.

While the gravity of the situation appears to be lost on many Catholics, that certainly doesn’t appear to be the case for those outside the Church.

Case in point, Wooden offered a number of quotes from Rabbi David Rosen, director of interreligious relations for the American Jewish Committee (AJC). Among his observations:

– John XXIII holds “the copyright” for the modern Catholic Church’s respectful approach to other religions.

– The Catholic Church “came to a more universal approach to dialogue out of its ‘rehabilitation,’ if you like, of its relationship with Judaism and the Jewish people.”

– John XXIII “is the revolutionary,” the rabbi said, and everything later popes did built on his groundbreaking moves.

– “I think it’s quite striking: John XXIII starts the process and John Paul II takes it to new heights.”

Just in case you’re not ready to vomit just yet, consider that Rosen represents a people who, in the AJC’s own words, “often disagree vigorously over the interpretation of tradition,” and who differ over such “fundamental issues” as “who is a Jew, what does it mean to be a Jew, the meaning of a Jewish state, and the future agenda of the Jewish people.”

And yet, if one were to identify the solitary point of doctrinal unity that practically every self-proclaimed Jew readily affirms as endemic to his or her identity, it is the rejection of Jesus Christ, their long-awaited Messiah who said, “He who rejects me rejects Him who sent me.”

If nothing else, Rabbi Rosen’s reaction to the upcoming canonizations (May God in His mercy forbid them!) hammers the point home that John XXIII and John Paul II, more than anything else, represent the neo-modernist’s own rejection of Jesus Christ as evidenced in their utter failure to embrace the mission that He gave to His Church.

In addition to adding glowing praise for John Paul II from a Muslim theologian who teaches at Rome’s Pontifical Institute for Arabic and Islamic Studies (and why such a thing even exists is beyond me), Wooden offers:

Blessed John began the process that led to the Second Vatican Council’s recognition that the seeds of truth and even God’s presence could be seen at work in other religions; Blessed John Paul showed the world how seriously the church believes that by inviting representatives of all the world’s major religions – and several local indigenous religions – to Assisi, Italy, in 1986 to pray for peace.

Based on the behavior of these popes, they apparently believed that the “seeds” are as good as the tree, and the Divine presence is such in these false religions as to render the call to conversion to the Catholic faith entirely unnecessary; a shameful deviation from the Divine mandate that has been carried on by every pope in between and since right up to Pope Francis.

No wonder those who reject Christ are so delighted with the prospect of the upcoming canonizations (May God in His mercy forbid them!) as such will deceive a great many innocents into believing that this is the “new normal.”

Make no mistake, it is not, and the Lord in His thirst for souls will endure the deception for only so long.