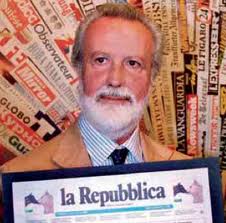 As most readers know, Pope Francis recently sent a letter to journalist Eugenio Scalfari in response to questions he had posed in articles that were published in La Repubblica, the Italian newspaper that he founded.

Scalfari’s questions, as the pope acknowledged, are undoubtedly shared by other “non-believers,” and the Holy Father characterized his answers, not as exhaustive and final, but as “tentative and temporary.” With that in mind, I offer the following, not just to Scalfari and other non-believers, but also to believers who wish to deepen their own understanding of how the doctrine of the faith may be applied to such questions.

Though your questions were not directed to me, inasmuch as they were posed publicly and concern the faith of the Catholic Church, I herein offer the following:

You ask how to understand the originality of the Christian faith inasmuch as it is founded on the Incarnation of the Son of God, in regard to other faiths that gravitate instead around the absolute transcendence of God.

First, the notion of “originality” with respect to Christianity – more specifically, the Catholic faith – is better contemplated in terms of its singularity among all “other faiths.” This singularity lies in the uniqueness of the Catholic Church, and her doctrines, as it is she alone who finds her origins in the Originator, the Creator who for love of humankind revealed Himself for their salvation.

As for “other faiths” that “gravitate instead around the absolute transcendence of God,” it is important to know that they do so, unlike the Catholic faith, with varying degrees of error.

The Divine Revelation of the transcendent God has been fully and completely expressed in the Incarnation; i.e., in the Person of Jesus Christ, whose Mystical Body is the Catholic Church alone, and to which the Lord entrusted the fullness of truth.

It is only in contemplating this reality that the “originality” of the Catholic faith is best understood.

You also ask what we should say to our Jewish brothers about the promise made to them by God: has it all come to nothing?

The promise has not “come to nothing;” on the contrary, it has come to perfect fulfillment in the person of Jesus Christ!

Let us acknowledge that God has abandoned neither the Jewish people, nor the covenant that He made with them, but we cannot stop there; rather, we must also acknowledge that the Jewish people have indeed abandoned God, even if perhaps, unbeknownst to themselves on an individual level via invincible ignorance, and have effectively therefore removed themselves from the covenant with Him.

In order for the Jewish people to return to a covenant relationship with God and avail themselves of His promise, they are objectively required to embrace its fulfillment in Christ Jesus. As Our Blessed Lord told us, “He who rejects me rejects Him who sent me.”

Part of the Church’s mission, therefore, is to continue, in charity, to extend the invitation to the Jewish people to embrace all that the Lord has promised, calling on them after the example of St. Peter, saying, “Save yourselves from this crooked generation” through the waters of baptism! (Acts 2:40)

You ask if the thought, according to which no absolute exists and therefore not even an absolute truth but only a series of relative or subjective truths, is an error or a sin.

It is both an error and a sin.

In order to more readily comprehend this, it is first helpful to accept in faith the words of Christ Jesus who said, “I am the way, the truth and the life.” (This approach serves as a fitting application of St. Augustine’s exhortation, “Understanding is the reward of faith. Therefore seek not to understand that you may believe, but believe that you may understand.”

The creature has no right to deny the Creator, who not only creates but sustains, for the creature’s very life is a testament to the Creator’s existence, and he who rejects the existence of “absolute truth” is rejecting the very existence of Jesus Christ who is the truth through whom all things were made.

Not only does absolute truth exist, it has been revealed to mankind in its fullness in Christ Jesus, and we do not hesitate to say that absolute religious truth is expressed without error in the doctrines of the Catholic Church, which is His Body, as well as in Sacred Scripture, the authentic interpreter of which is the sacred Magisterium (teaching authority) of the Church.

Finally, you ask if, with the disappearance of man on earth, the thought will also disappear that is able to think of God.

The immediate answer is no, but distinctions must be made between the elect and the damned, or to use Scriptural language, the sheep and the goats.

It must first be said that the question is flawed in that it seems to presume that the “end of the world,” or the passing of life as we know it, is tantamount to the “disappearance of man” who ponders God. It is not.

At the end of the age, Christ will execute the final judgment, as we recite in the Creed, “He will come again in glory to judge the living and the dead.”

Those who receive their heavenly reward will no longer merely think of God; they will see Him “face-to-face” as He is, while the damned will not, and will instead eternally suffer knowledge of that deprivation.

For the non-believer, these answers can be but an “appetizer” that speaks to the Good News that God, in His infinite love for mankind, has made the truth that alone can satisfy our every hunger available in all of its fullness in Jesus Christ, the Only Begotten Son who laid down His life that we may be saved.

As for the banquet itself, “it cannot be difficult to find … if only it be sought with an earnest and unbiased mind; for proofs are abundant and striking” (cf Pope Leo XIII, Immortale Dei – 7).