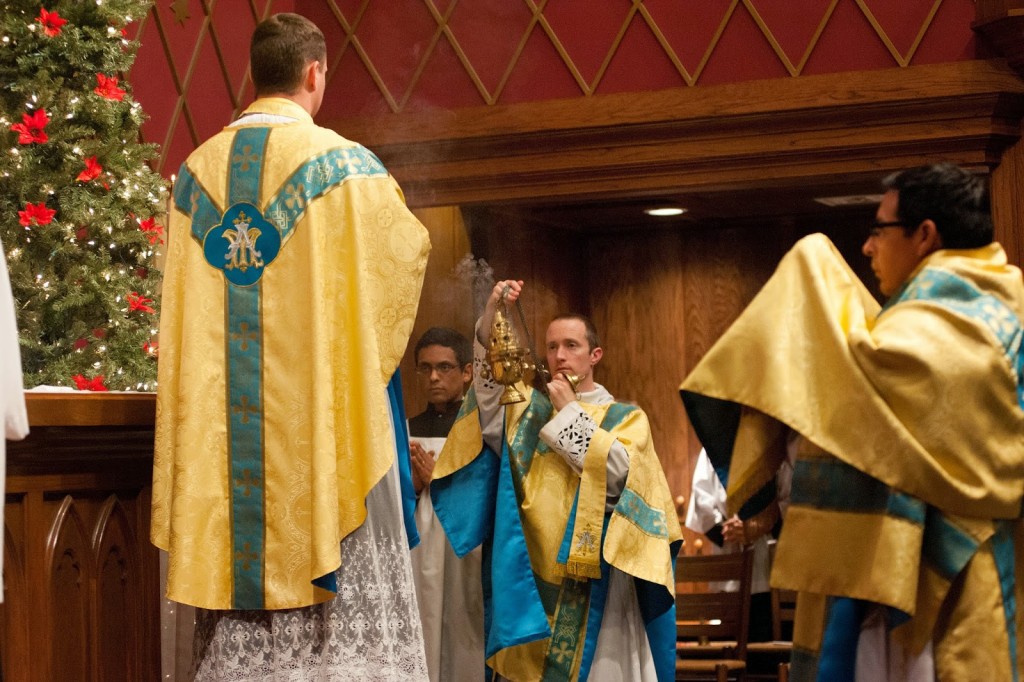 I heard a sermon by a traditional priest describing the role of the paten at Mass: He explained that the paten represents the Israelites and that, in the TLM, the Host is removed from the paten after the Offertory because of Israel’s rejection of Christ and is only replaced onto the paten after the Pater noster to symbolize Israel’s conversion and acceptance of Christ just before the Second Coming.

The priest didn’t go on to say this, but I then thought about the Novus Ordo and how the Host remains on the paten constantly to represent the new theology of Vatican II that says that the Jews still have their covenant and therefore are saved in their own way.

Is the way the Novus Ordo uses the paten a promotion of the errors of the Council and a danger to the Faith? 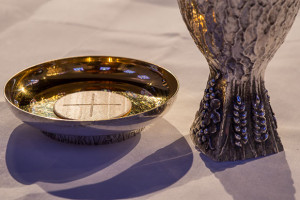 I am glad that you offered me the opportunity to address an issue that often arises concerning the actions of the traditional Roman Mass, that is, of their symbolic value or interpretation. There is a danger in applying a symbolism to every action of the Mass, because the actions of the ministers usually exist for practical or historical reasons, while only much later in time were symbolisms—some rather arbitrarily—attached to them. In fact, the Roman Mass is renowned for its sense of practicality (an element of Romanitas) and its eschewing of the mere symbolic.[1]

A good case in point is the use of candles on the altar during Mass which is prescribed by liturgical law. Originally, candles were merely used for the practical reason of illuminating the church’s interior. Only later in time was a mystical purpose applied to the burning of candles during the sacred liturgy. It might also surprise readers to know that some authorities in the Early Church were opposed to the use of candles for mystical purposes, as they saw a connection with its former pagan cultus use.[2]

Now concerning the paten, this sacred vessel shaped like a plate has a very practical purpose: to hold the fragmented Host (or fractio panis—one of the most ancient terms for the “Mass”) and to prevent any accidental desecration after the Fraction has occurred. In more ancient times, the patens were often rather large, like the size of a dinner plate or charger. The paten had to be rather large to hold all of the Sacred Fragments obtained from a rather large Host (much larger and thicker than today’s celebrant’s host). 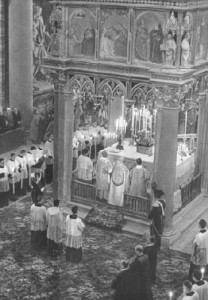 In this picture of Benediction (probably for Corpus Christi) at St. John Lateran, you can see how small older altars often were, in fact, even smaller than this medieval altar.

Also, in earlier times, the altars were rather small, even less than a modern card table in some cases. So due to the size of the paten, it would be removed from the altar after the Offertory and held veiled first by an acolyte, and then at a later point of the Canon, taken up (still veiled) by a subdeacon. This was especially the practice during the ancient Papal Mass,[3] though later, only the subdeacon would be allowed to hold the veiled paten.

The paten would be returned to the altar for the Fraction of the Host, which in ancient times was more elaborate (and lengthier ritual) than today—because of the papal liturgical practice of the frumentum, which is a fascinating subject for another time—hence the introduction of Agnus Dei chant by Pope Sergius I, which was sung repeatedly (with just the ending “miserere nobis”) until the Fraction of the Host was completed.

Later the Fraction was reduced in its ritual to the simple and very practical form we know today, while the Agnus Dei chant was moved to its present position in the Ordinary (after the Canon) along with the addition of the clause “dona nobis pacem” in connection with the giving of the Pax during a Solemn Mass.

Eventually the size of the Host was reduced to what we are accustomed to seeing today, while the dimensions of altars were increased. Nevertheless, the custom of removing the paten from the altar at Solemn Mass continued to be practiced as a memorial of the ancient practice. It was not until the medieval period—when applying symbolisms to everything was the rage—that any signification was given to the practical and historical reason for removing the paten from the altar at the Offertory and then returning it during the Pater noster.

However, it should be noted that the commonly-given symbolism is that the subdeacon holds the veiled paten before his face to demonstrate the blindness of the Jews to the coming of the Messiah. However, that being said, the rubrics actually require the subdeacon to slightly lower the paten so he can gaze upon and adore Christ during the Elevations. (See photo above)

It might also be interesting to know that the practice of veiling the paten (because it is a sacred vessel, though historically also possibly from the practice of the frumentum) during Solemn Mass also applied to Low and High Masses. Since there is no subdeacon at these forms of the Mass, the celebrant hides the paten partially under the right side of the corporal and the remainder of the paten with the purificator.

There are two other noteworthy mentions connected with the paten.

First, after the subdeacon has received the paten and veiled it, he descends to his position at the center of the foot (or just before the first altar step) and genuflects to the altar, though there is actually no reason for this reverence.[4] This too is a relic of an older and now defunct practice in the Roman Mass, that of the Offertory Procession, when the subdeacons would return from collecting the gifts from the faithful at the sanctuary’s perimeter, and thus would reverence the altar upon their return. Though the reason for this genuflection no longer exists, it was retained in the missal’s rubrics (and confirmed by the Sacred Congregation of Rites early in the 20th century) in memory of the ancient practice.

Second, the paten is not taken from the altar and held veiled by the subdeacon at a Solemn Requiem Mass, though it is still covered by the corporal and purificator. Again, this recalls the more ancient practice of not distributing Holy Communion during a Requiem Mass, and so the Host was not fractioned for this purpose, thus a large paten was not required.

As for the practice in the Novus Ordo Missae,[5] the use of the paten was greatly simplified, and so it is no longer veiled after the Offertory as the celebrant’s Host remains on the paten up until his Communion. Furthermore, the ministerial office of the subdeacon was abolished in the Novus Ordo, so the paten is also never removed from the altar during the Liturgy of the Eucharist segment.

Once again though, while this Novus Ordo reduction of praxis concerning the paten is to be decried (especially considering that the consecrated Host never rests on the corporal, a practice that is not only ancient but also profoundly symbolic), the distinction must be clearly made that this was not done by the Consilium to omit the medieval signification given to the subdeacon holding the paten, but merely to simplify what was considered an outmoded and complicated ritual.

1 In my book, The General Principles of Ceremonies of the Roman Rite, I offer a brief explanation about how Romanitas characterizes the actions of the ministers, as well as a supporting quote from the great liturgical historian, Edmund Bishop.

2 For further reading about the liturgical use of candles, I suggest the book, Candles in the Roman Rite.

4 It is a general principle for the sacred ministers (as opposed to the inferior ministers, i.e., the servers) that they do not genuflect when going from the side of the altar (or within its ambit) to the center and vice versa. The exception to this rule occurs after the Consecration (and until the Blessed Sacrament is reserved after Communion), when the Host is exposed to those on the predella. Thus in the case just mentioned, the “archaic genuflection” of the subdeacon is a specific rubric and an exception to the general principles.

5 As described in the General Instruction of the Roman Missal (GIRM) for the Novus Ordo Missae.

Trinitarian Heresy: The interpretive key to the crisis